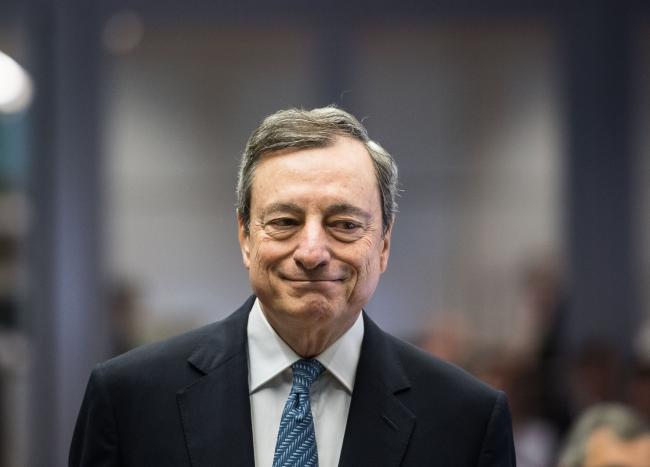 The outgoing chief, hailed as the savior of the euro for pledging to do “whatever it takes” to defend the currency in 2012 and vanquisher of German-led opposition to quantitative easing three years later, faces a backlash that won’t go away. It may soon enter its second month.

Draghi’s insistence on pushing ahead with more bond purchases at the Sept. 12 policy meeting, relying on governors from southern economies and the euro’s smallest countries to defeat opposition from colleagues in the region’s core, now has another twist. It turns out the panel of officials advising policy makers on what to do was against QE as well.

The leak of that information to the Financial Times extended a narrative of controversy that burst into the public domain with a flurry of interviews starting on Sept. 13 from governors on either side of the debate, followed by the resignation of an ECB board member, and then a further exchange of blows as former policy makers weighed in.

The schism looks increasingly likely to scar Draghi’s legacy — and the longer it lasts, the more it also threatens to spill into the reign of his successor, Christine Lagarde, who takes office on Nov. 1.

While Bank of France Governor Francois Villeroy de Galhau said on Friday that the Governing Council is “turning the page,” that remains to be seen. With his Italian, German, and Dutch colleagues all scheduled to deliver speeches next week around the International Monetary Fund meetings, the argument might keep going.

The FT story prompted a warning on Thursday from Olli Rehn, head of the Finnish central bank, about the damage the spat can cause.

“I myself am a product of democratic culture and football teams,” he told Bloomberg TV. “If you are divided you tend to lose games. If you are united, you tend to score and tend to win.”

Rehn was one of the first governors to defend the decision in September. At the time, his dissenting colleagues were mounting a rapid assault.

Bundesbank President Jens Weidmann, Draghi’s most prominent and longstanding critic, told Germany’s tabloid Bild newspaper that the ECB delivered a package out of proportion with an economic prognosis that “isn’t that bad.” Dutch Governor Klaas Knot even released a statement explaining his opposition. Austria’s Robert Holzmann said the stimulus may have been a mistake.

The ECB’s chief economist, Philip Lane, and the governors of the Spanish, Greek and Cypriot central banks later followed Rehn in coming publicly to Draghi’s aid, in a signal of concern that the hawks were dominating the public narrative.

The president himself chose to give only a brief response to the controversy in his last appearance to the European Parliament, on Sept. 23, saying that communication of dissent shouldn’t “undermine the effectiveness of our decisions.”

The matter could have ended there, but it didn’t. The next day, Villeroy Bank of France Governor Francois Villeroy de Galhau broke his silence to admit he too opposed bond purchases.

A day later, Sabine Lautenschlaeger became the third German Executive Board member in a row to quit without finishing their eight-year term. She was also against more QE, though she didn’t say if that was a reason for her exit.

The past week has seen former senior policy makers join the fray. Two ex-chief economists of the ECB, Otmar Issing and Juergen Stark, along with some previous heads of the German, Austrian and Dutch central banks, published a memorandum criticizing Draghi’s policies. In a direct riposte, Peter Praet, who left as chief economist earlier this year, told Bloomberg that “this sort of noise at the end of the mandate is not helpful.”

The ECB’s own account of the September meeting published on Thursday reinforced the message that it was a messy debate. Policy makers agreed on the need for action but split on almost every element of the package. Some even rejected a rate cut, the most conventional option on the table.

The revelation on the Monetary Policy Committee’s advice provides an extra glimpse on the extent of disagreement. One former top policy maker, speaking on condition of anonymity last month, wondered aloud if the president’s insistence on overriding such opposition might prove in the long run to have damaged the institution.

Ensuring that the ECB can shake off this controversy will be a key challenge for Lagarde. In an interview with Bloomberg Television on Sept. 24, she gave a hint of how she will approach the matter — in words similar to those of Rehn.

“Making sure that we are a team, that we disagree amongst ourselves and then, once the disagreement is settled, once there is a common line, that we all move together — I think that has a huge impact,” she said.