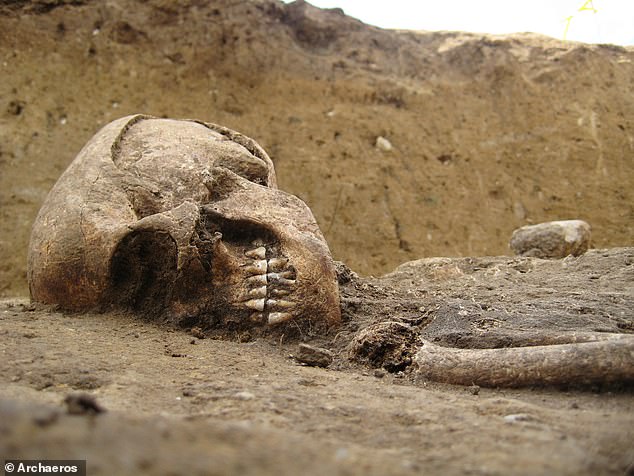 Researchers in Germany unearthed the remains of a woman believed to have lived around 4,500 years ago, buried on her side and facing north in a fetal position, similar the posture other ancient remains have been found in across Europe 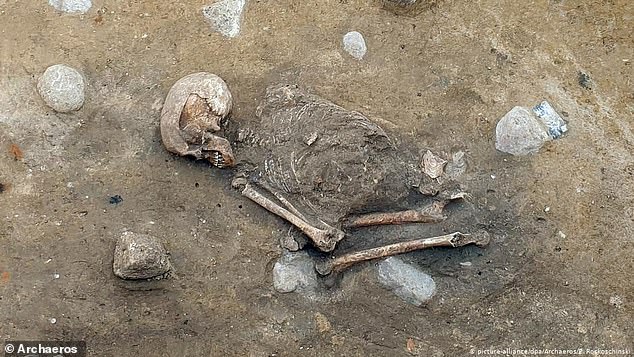 There were not other ornaments or funeral markings at the gravesite, beside a few ‘lovingly placed fieldstones.’ The team is now working on conducting DNA analysis and other lab testing to learn more about the woman’s health, lifestyle, and possible social standing

Researchers in Germany discovered the roughly 4,500-year-old remains of a woman buried in a simple but ‘lovingly’ made gravesite.

The discovery was made by Philipp Roskoschinski and a team of archeologists from the firm Archaeros while on a dig at Uckermark, a rural county around 60 miles northeast of Berlin.

Though the gravesite itself was humble, the posture and position of the woman indicate a possible connection with other ancient burial practices seen as far away as Scotland.

‘I’ve never found anything like this,’ Roskschinski said in an interview with Tagespeigel.

The remains were positioned in one of the oldest documented burial postures in Europe, rolled onto her right side and facing north, with her legs and arms bent into a kind of fetal position.

It’s a similar position to another body found on the Scotish island of Tiree, which researchers believe was more than 5,000 years old, suggesting the practice may be a sign of some kind of shared practice that many disparate populations across Europe practiced.

There are still more questions than answers for the Uckermacker gravesite, and few clues about what sort of life the woman might have led, according to a report in Newsweek.

‘Unfortunately, there were no other finds in the grave that could tell us more about the woman’s life,’ Roskoschinski said.

‘But the site was lovingly surrounded by fieldstones.’

The team is planning to conduct a series of genetic tests on the remains to try and learn more about any possible health conditions the woman might have had.

They’ll also examine teeth samples for hints about her diet to try and to learn more about her lifestyle and, potentially, her social standing.

The remains on Tiree showed clear indications of rickets, a diseased caused by vitamin D deficiency, often due to lack of sunlight.

Researchers hypothesized the condition could indicate the woman was forced to stay indoors for most of her life, perhaps indicative of a special religious role.

Radiocarbon analysis dates her body to between between 3340 and 3090 BC – placing it in the Neolithic period.

Isotopic analysis showed she was local to the area, but didn’t eat sea fish.

This seaside location and supply of fish should have provided her with enough vitamin D to avoid rickets.

Therefore, experts believe she was kept indoors, or wore clothing that prevented adequate absorption of sunlight.

Speculating on what may have been the reason for this confinement, the researchers said she could ‘have had some special religious role that confined her to a dark interior space.’

However, if she was a revered religious person it is unlikely her grave would have been so basic, suggesting she may have been a witch, or a spiritualist of lower class.

Alternatively, the experts believe she may have worn a costume that covered her body and shielded her face, or she could have been a domestic slave.

Antioxidant that allows fruit flies to live without sleep could provide...