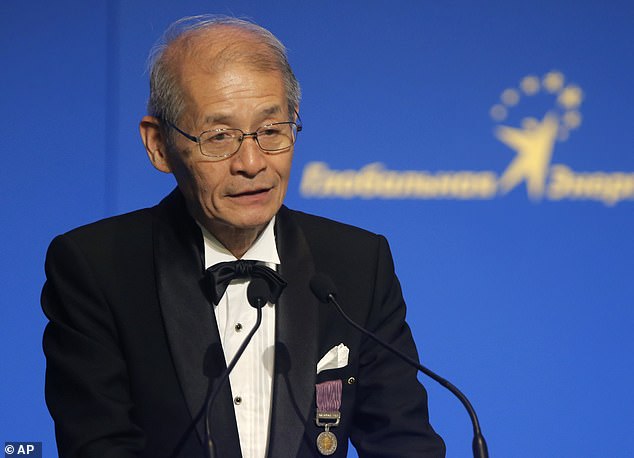 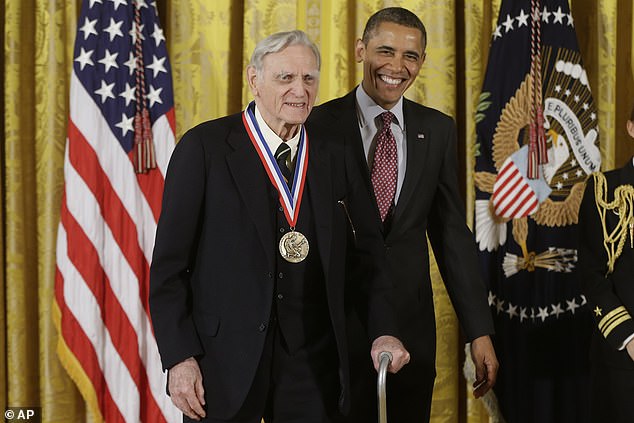 John B. Goodenough, pictured receiving a National Medal of Science from Barack Obama, has become the oldest ever Nobel prize winner, at 97 years of age 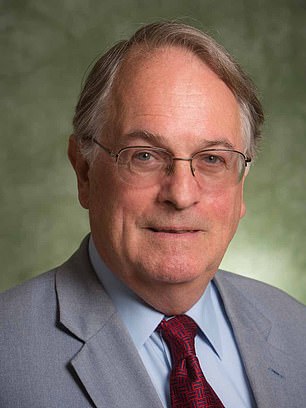 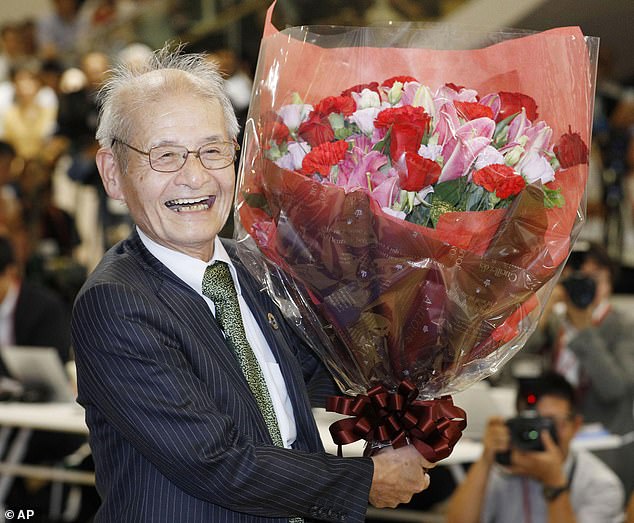 Akira Yoshino of Asahi Kasei Corporation poses with a bouquet of flowers in Tokyo Wednesday, Oct. 9, 2019, following an announcement that he was awarded the Nobel Prize in Chemistry

The Nobel Prize for Chemistry has been awarded to a group of three scientists who developed the lithium-ion battery.

The rechargeable batteries can hold immense amounts of energy without overheating and are now used for everything from smartphones to electric cars.

The award is the third to be announced this week after the medicine award was given on Monday and the physics prize yesterday.

The Nobel Committee said: ‘Lithium-ion batteries have revolutionized our lives and are used in everything from mobile phones to laptops and electric vehicles.

‘Through their work, this year’s Chemistry Laureates have laid the foundation of a wireless, fossil fuel-free society.’

The use of Lithium cobalt oxide (LiCoO2) as a positive electrode material was first reported by Dr. J.B. Goodenough in 1979.

It offered a totally new concept for a rechargeable battery with positive and negative electrodes acting only as hosts to the lithium ions – with no further chemical reaction occurring.

While charging the lithium ions are released from the LiCoO2 on the positive electrode transferring to the the carbonaceous negative electrode.

As the battery runs down the reverse reaction occurs – meaning electricity is stored by repeating this reversible reaction.

Akira Yoshino’s work throughout the 1980s helped to provide a solution to the problem faced by electronics inventors world wide – large and heavy batteries.

Dr. Yoshino focused on the creation of a new rechargeable battery with a nonaqueous electrolyte.

He found that to avoid decomposition of the electrolyte solvent a carbonaceous material with a certain crystalline structure should be used as the negative electrode.

Along with the prestigious award, which has been won by the likes of Albert Einstein and Marie Curie, the trio will receive a 9million kronor (£750,000) cash reward to be shared, a gold medal and a diploma.

The laureates will receive them at an elegant ceremony in Stockholm on December 10 – the anniversary of Alfred Nobel’s death in 1896.

The batteries electrodes (conductors) are made of the highly reactive lithium and carbon.

As lithium is so reactive a lot of energy can be stored in its atomic bonds meaning a high energy density.

For 1kg of lithium battery users can expect 150 watt-hours of electricity.

In comparison a nickel metal hydride (NiMH) battery can store from 60 to 100 watt-hours.

While a lead-acid battery, the earliest type of battery invented in 1859, will only store 25 watt-hours per kg.

Unlike NiMH, lithium-ion batteries only loose around five per cent of their charge per month – NiMH lose 20 per cent.

Lithium batteries can be charged and recharged hundreds of times and have no ‘memory’ so there is no need to leave the battery to run flat before recharging as with other cells.

Modern smartphones and tablets are 'baffling black boxes' and make it harder for children to learn about science because they're difficult to take apart...

Safe alternative to pesticides? Scientists develop a polymer coating for plants that controls harmful fungi without making them toxic

Mario Balotelli is set to walk away from Brescia after they...