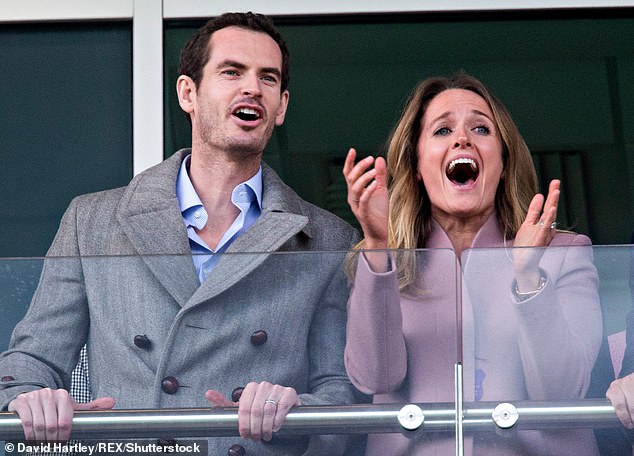 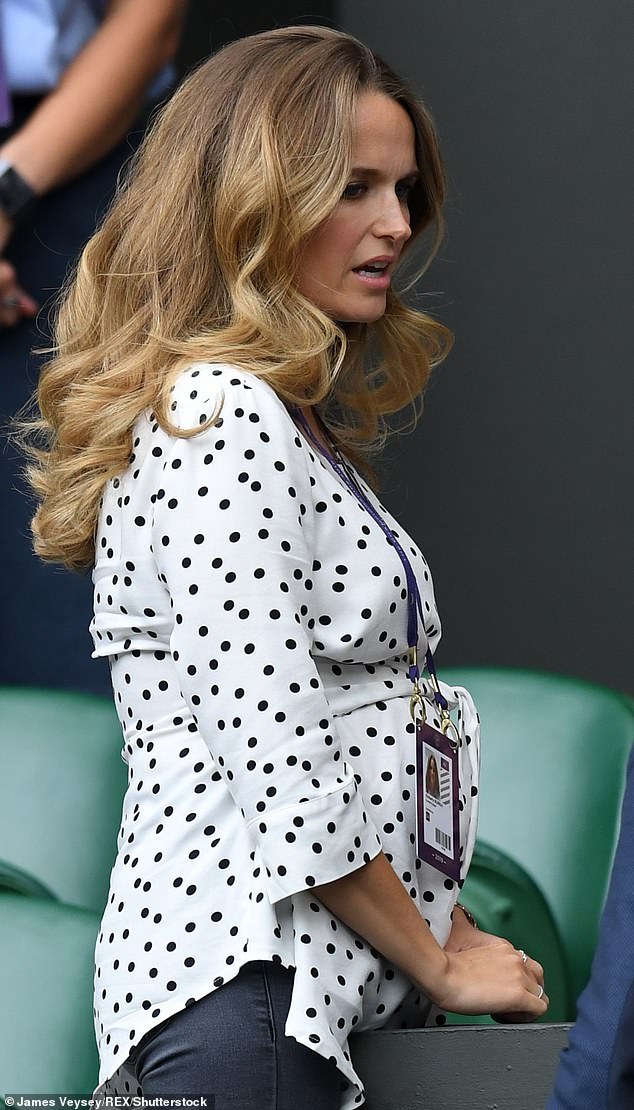 Kim Sears, 31, sparked speculation when she arrived to watch her husband at Wimbledon in July wearing a polka dot maternity top 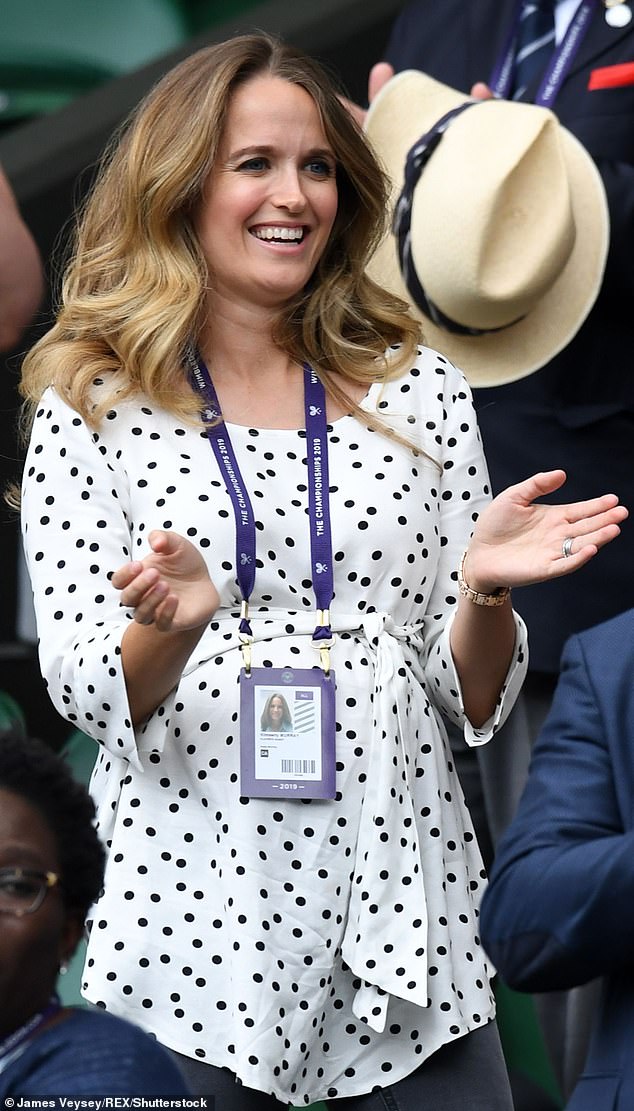 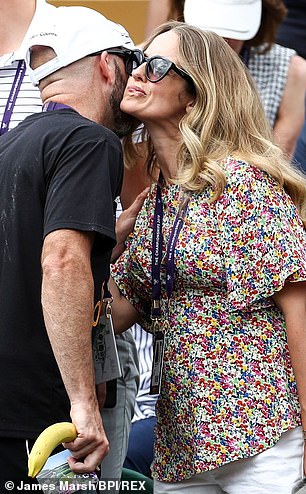 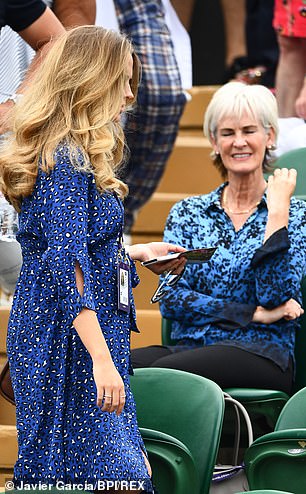 Her appearance with an apparent baby bump on consecutive days at the tournament sparked rumors that she was expecting although it was not confirmed by the couple until now. She was seen with an outline of a baby bump as she took her seat near mother-in-law Judy wearing a floaty blue leopard-print shirt dress 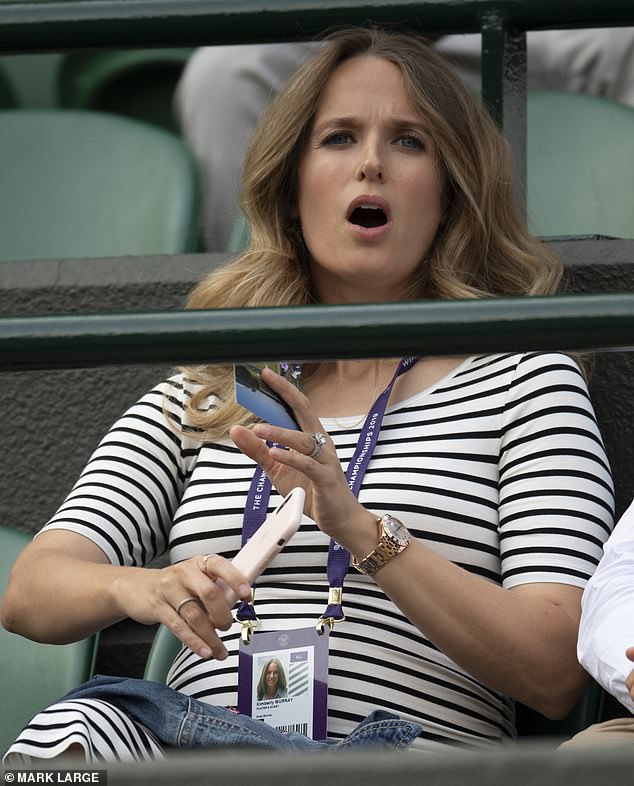 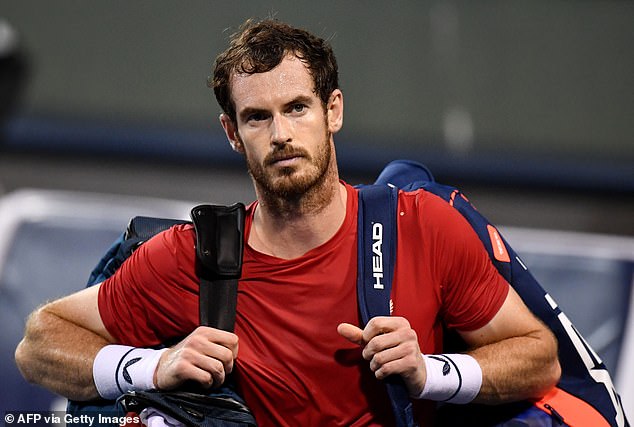 The tennis pro, 32, is currently travelling to Antwerp, Belgium, to take part in the European Open

Sir Andy Murray has revealed he is to become a father for the third time – and his wife Kim could go into early labour.

The two-time Wimbledon champion, 32, could take a break from his tennis comeback as early as next week to be at the birth.

It comes only months after his wife sparked speculation she may be pregnant after arriving at Wimbledon wearing a maternity-style, polka dot top while supporting her husband in the mixed doubles.

The couple already have two daughters, Sophia, three, and Edie, who will be two next month.

Sir Andy, from Dunblane, Perthshire, made the revelation after admitting he has chosen to compete in the European Open in Antwerp next week rather than the Stockholm Open, which runs at the same time, as the Belgian city is only a short flight from home.

He told The Times yesterday: ‘Obviously the baby can come any time from pretty much next week.

‘I would adjust my schedule if I couldn’t go to Antwerp. My plan is to play Antwerp and then I am done through to the Davis Cup.

‘If the baby came early, I would miss Antwerp and then maybe play at the Paris Masters.’

It is not the first time Sir Andy has faced a major tournament clashing with the birth of his child.

In 2016, there was just a one-week gap between the Australian Open, where he was defeated by Novak Djokovic, and the birth of his first child, Sophia.

Sir Andy made his tennis comeback in June at the Queen’s Club Championships, six months after a successful operation on his hip joint.

He won his first match in a Masters tournament since spring 2017 when he beat Argentinian Juan Ignacio Londero over three sets in the Rolex Shanghai Masters on Monday.

However, the next day he lost in the last 32 of the tournament to Italian opponent Fabio Fognini.

The pair then began a heated row after the Scot accused his rival of trying to put him off during by shouting over the net.

Regarding his injury comeback, Sir Andy said: ‘I had two years of having lots of pain after every single match.

‘Now I play a match, the body hurts, I have some pain in my back, the muscles are tired and things like that, but my hip is fine and I couldn’t remember what that was like before.

‘It has been hard but I expected it to be quite a bumpy road because it wasn’t something that has been done in tennis before.

‘I know – having done this – that you will see way more athletes having this operation and coming back to compete, because there is no reason why you should not be able to. There is no pain.’

He is set to play the Australian Open in January that year.

When Kim Sears was first seen in the £85 Isabella Oliver a black-and-white, polka dot maternity blouse eagle-eyed fans took to social media to share their theories.

One user wrote: ‘Anyone else think there maybe the tiny patter of little Murray feet on the way?

‘There’s been a few times I’ve thought Kim looked pregnant both at Wimbledon and a few weeks back at Queens. Fabulous news if they are.’

Another added: ‘Kim, is that a baby bump I see?’

The couple got married in Sir Andy’s home town of Dunblane, Scotland, in 2015.

Last year, Andy Murray took to Instagram to share a playful snapshot of his bloodied nose that had been inflicted by his then 10-month-old Edie.

In the caption, he wrote: ‘When playing with your 10 month old daughter gets a bit too physical.’