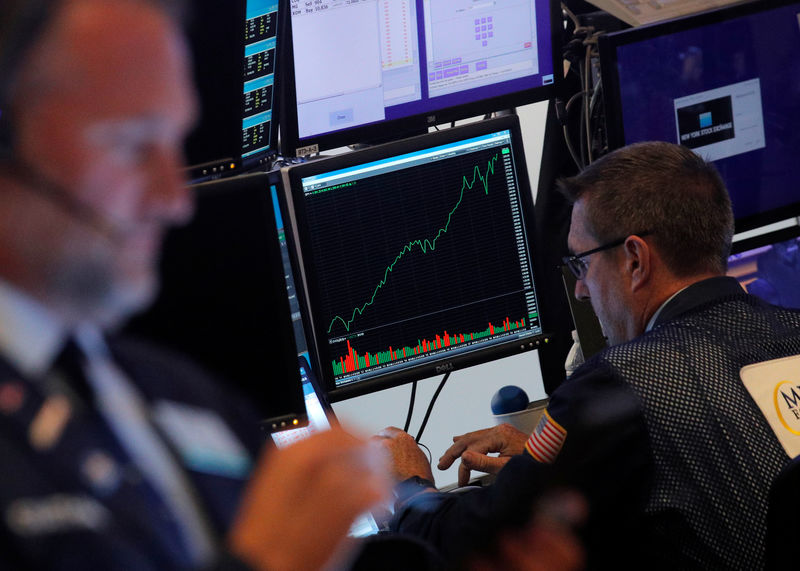 (Reuters) – Losses in shares of U.S. technology majors Apple and Broadcom held the S&P 500 just under record levels on Friday, as traders balanced the latest indicators of an uncertain global growth outlook with perceived progress in Sino-U.S. trade relations.

Broadcom Inc (O:AVGO), among the world’s biggest chipmakers, weighed on the tech-heavy Nasdaq with a 2.6% fall, after it said in results late on Thursday that demand for microchips had bottomed out and that a recovery was not yet on the cards.

That pointed to more headwinds for tech companies buffeted this year by the trade conflict. Technology stocks (SPLRCT) fell 0.6% and were the biggest drag among the 11 major S&P sectors.

All of the FAANG stocks, apart from Netflix Inc (O:NFLX) came under pressure.

Still, the S&P 500’s marginal gains brought it to within 0.6% of its record high, with financial stocks (SPSY) providing the biggest boost.

The blue-chip Dow Industrial Average (DJI) was also within 0.6% of its all-time high and was set for its eighth straight session of gains to match a winning streak from May 2018.

“It’s natural for the market to take a pause here given the recent trading in the last few days,” said Keith Buchanan, portfolio manager at GlobAlt in Atlanta.

“To break through from this point, there probably needs to be some incremental news from a global growth perspective or more meaningful developments on trade.”

Trade worries were soothed this week after tariff concessions from both the United States and China, and President Donald Trump’s latest comments that he was potentially open to an interim trade deal with China.

However, doubts about U.S. growth remain, with the International Monetary Fund forecasting that the tit-for-tat tariffs could reduce global GDP in 2020 by 0.8%.

The defensive healthcare (SPXHC), real estate <.splrcr> and consumer staples sectors (SPLRCS) were among the laggards on the S&P 500.

The S&P index recorded 19 new 52-week highs and one new low, while the Nasdaq recorded 74 new highs and 16 new lows.

Lloyds Bank CEO António Horta-Osório to step down in 2021