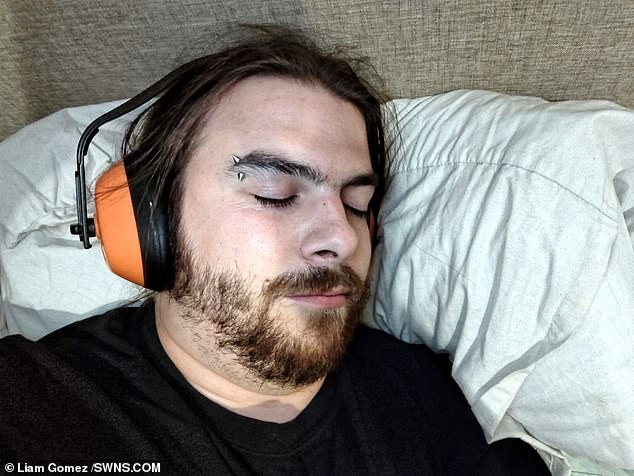 Liam Gomez, 27, has now vowed to sleep wearing earmuffs after a spider crawled into his ear in the middle of the night 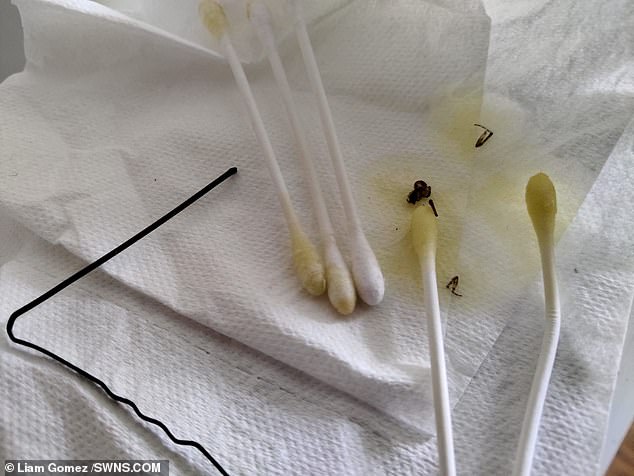 He applied olive oil to ease it and was horrified to see a spider’s leg stuck to the end of the cotton bud. The web designer from Folkestone, Kent, spent the next hour extracting the spider – bit by bit 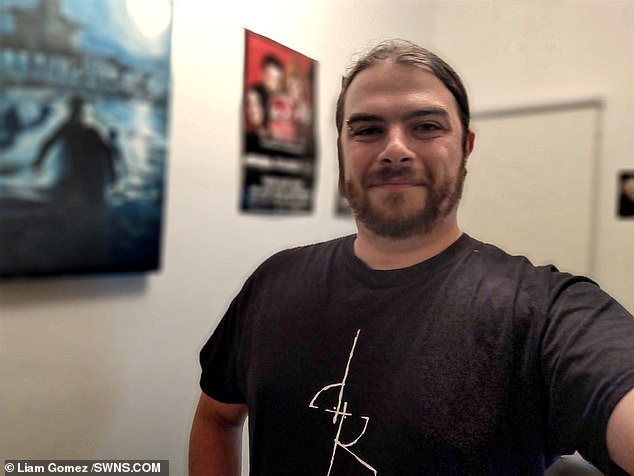 When Liam Gomez awoke feeling dizzy and with a soft scratching sound inside his head, he phoned his work and said he was suffering with vertigo and earache.

But as the 27-year-old web designer plunged a cotton bud into his ear to try to unclog it, he was horrified when it emerged laced with spider legs.

The self-confessed arachnophobe was then forced to spend a torturous hour scraping out the remnants of the creepy-crawly from his ear one body part at a time.

Mr Gomez, from Folkestone, Kent, said: ‘My initial reaction was just to get the bloody thing out of me as fast as possible – I was obviously revolted as I hate spiders!

‘Once I’d calmed down a bit I did then think ‘well, that’s one for Facebook!’.

But his eight-legged nightmare may not be over, as he is praying that the spider was not a female which laid eggs inside his skull.

Mr Gomez, who has vowed to wear earmuffs to bed from now on, had swept away a spider nest from his hallway the night before.

He said: ‘I arrived home from work on Tuesday evening to discover a spider’s nest above my front door, with lots of hatchlings.

‘So I swept them away with a broom, and went to bed. The next morning, I woke with blocked ears and vertigo, so I called in sick to work.

‘I put a couple of drops of olive oil in my ears and decided to go back to sleep for a bit – I could feel tickling in my ear, but put it down to the oil.

‘When I woke up a couple of hours later, I could still feel the sensation, but also hear a faint scratching sound, so I decided to investigate with a cotton bud.

‘It came out clean, apart from a single leg! It was at that point I thought – ‘oh god, I know what that means!’.

‘I used a hairpin and the cotton bud to retrieve the spider, making sure to count the legs coming out, then made sure to give my ear a good clean!

‘Total sod’s law as I’m an arachnophobe – absolute nightmare! And the irony is – I’m a web designer for a living!’

Mr Gomez, who suffered the ear infestation on October 8, added: ‘I definitely think ear muffs are the way forward!

‘I can only presume one from the nest I cleared must have snuck into my ear overnight – maybe as some sort of revenge mission!

‘I didn’t think to check if it was female. I’m hoping it was male, because I’m really hoping it didn’t have to chance to lay eggs!’

Doctors advise never to stick cotton buds in your ear, because they can break off and cause nasty infections.

Earlier this year, a 31-year-old man collapsed after suffering a seizure and complaining of searing headaches.

A brain scan revealed a bud was wedged inside his left ear and had led to necrotising otitis externa, a bacterial infection that starts in the ear canal before spreading to the skull, where it eats through the bone.

Facial nerves can also be affected, causing a stroke-like droop which can be fatal.

The NHS, GPs and even the manufacturers warn against scraping inside the ear with cotton buds.

Hearing problems from busted ear drums and tinnitus can also be caused from shoving buds into your ears.

Vik Veer, a consultant surgeon at the Royal National Throat, Nose and Ear Hospital in London, sees people with infections ‘on a daily basis’.

‘In their most extreme form, these ear canal infections may progress to malignant otitis externa, particularly in the elderly or in diabetics,’ he says. ‘We’ve always had one or two such patients on the ward.’

Instead of buds, he advises using sodium bicarbonate drops — available from chemists — to dissolve stubborn wax.