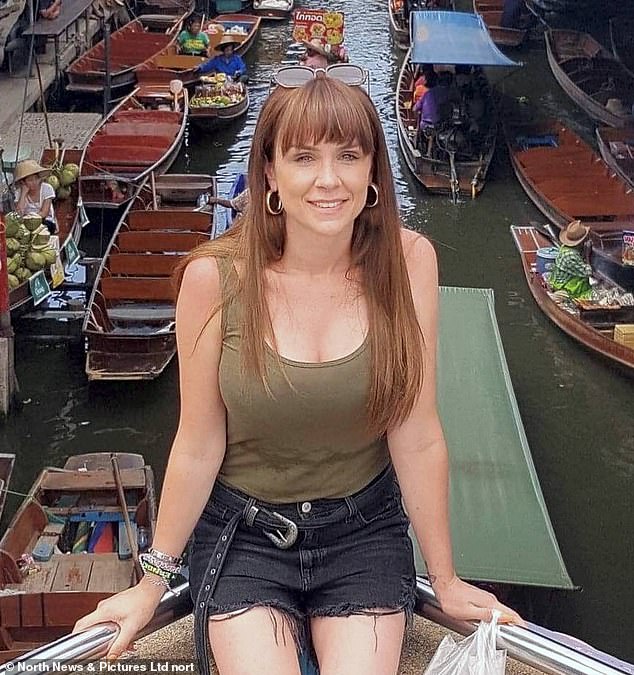 Jamie Lea Church, 34, was diagnosed with cervical cancer after rushing to book a smear test when a client of hers broke down about her own results 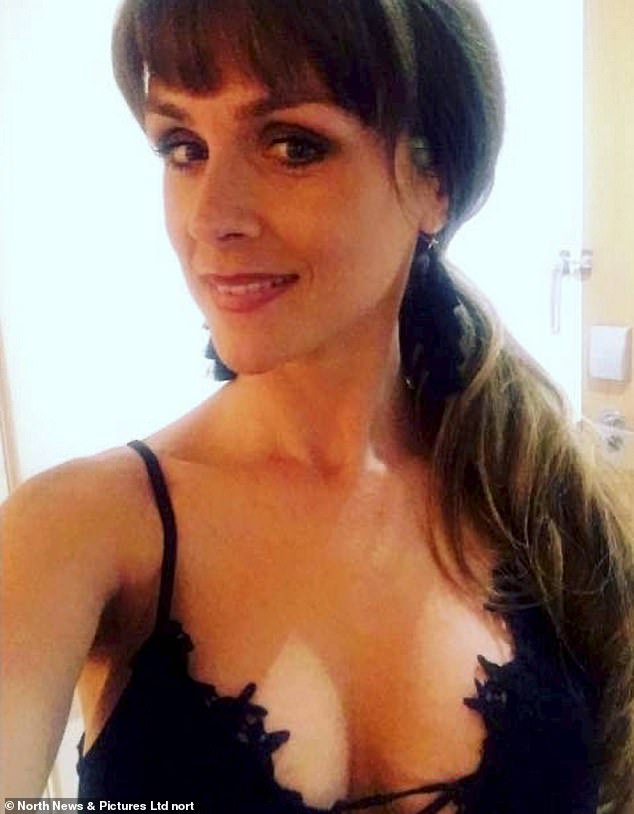 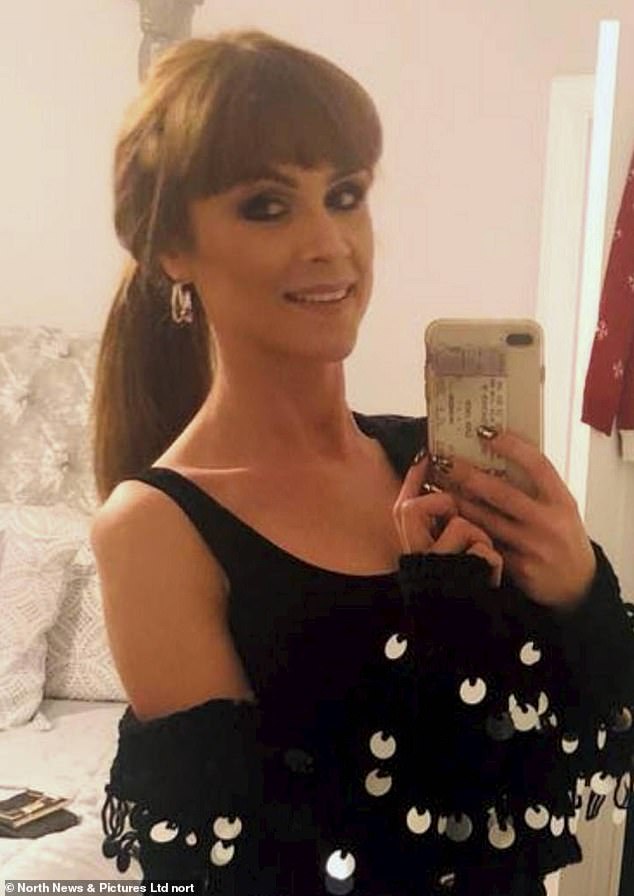 Ms Church is now cancer-free and is urging others to get their smear test. She said she would have put hers off until after Christmas because she felt healthy 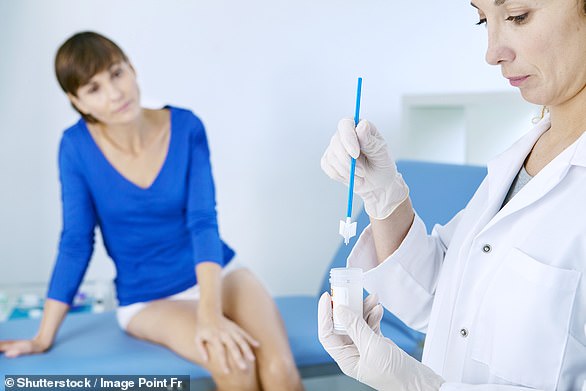 Being screened regularly means any abnormal changes in the cells of the cervix can be identified at an early stage and, if necessary, treated to stop cancer developing (stock image)

A beautician was diagnosed with cervical cancer after she rushed to book a smear test when her client broke down in tears about her own results.

Jamie Lea Church, 34, who runs an eyebrow salon named High Brow, in Sunderland, had been putting off her smear test because life was busy, she was embarrassed to have the procedure, and felt fit and healthy.

But after hearing of her client’s ordeal, Ms Church immediately booked in and was seen just weeks later at her GP surgery.

Three days after the screening in August 2019, she was told she would need further testing because results showed she had abnormal cells.

The mother-of-three was given the devastating news the cells were cancerous in October. However, it was caught at an early stage and she was treated and already claims to be disease-free.

Now Ms Church has business cards printed with the message: ‘I spend longer doing your brows than the time it takes for a smear test, book yours now.’

Speaking about her diagnosis, Ms Church said: ‘I can’t even begin to tell you the whirlwind of emotions that flooded my mind.

‘I just thought of my kids, who is going to support my kids? I also thought how the hell could this happen to me?

‘But here I am sat in a hospital room being told I have cancer. The shock of that day will never ever leave me.’

The NHS invites all women between 25 and 49 for cervical screening every three years. Those aged 50 to 64 are invited every five years.

Ms Church opted to have a smear test when her client – who was being treated at the time – told of her worry over her own results.

The chat gave her ‘goosebumps’ and she booked in for the smear test she had been dreading straight away.

She wrote on Facebook: ‘My last smear was 2014 so a little later than normal.

‘I’d love to say I’d probably have booked it after Xmas but if I’m being honest I wouldn’t have been in any rush. I mean why would I?

‘I’m a fit and healthy 34-year-old. I can do with out the embarrassment of having my bits out for all to see. Iv got enough going on with out thinking about myself [sic].’

After having her smear test, Ms Church was asked to attend Sunderland Royal Hospital, where doctors told her they had found abnormalities.

Around one in 20 women show abnormal changes to the cells of their cervix, but it doesn’t mean they have cancer. They should be referred for a more detailed exam – usually a colposcopy.

Doctors performed an immediate biopsy to remove small pieces of tissue from the cervix for testing.

In most cases, the abnormalities do not mean cervical cancer. But Ms Church was told she had the killer disease.

Ms Church had the cells removed during a large loop excision of the transformation zone (LLETZ), a procedure for very early stages of cervical cancer, according to the NHS.

The procedure may also be used for abnormal cells which aren’t cancerous. Cells are removed using a fine wire and an electrical current under local anaesthetic.

Cervical cancer affects the lining of the lower part of womb.

The most common symptom is unusual bleeding, such as between periods, during sex or after the menopause, but other signs can include:

Ms Church did not have to stay overnight in hospital during her treatment but claims she suffered weeks of bleeding and cramps – but she said it was a small price to pay.

Stage one cervical cancer is usually treated with surgery and combined chemotherapy and radiotherapy, according to Cancer Research UK.

Returning to Sunderland Royal Hospital on December 4, Ms Church, mother to Jaxon, 14, Nevaeh, 12, and Asa, eight, was given the good news that the treatment had worked and the cells were gone.

She said: ‘I’ve spent months waiting on results and having letters come through the door screaming cervical cancer.

‘It was a surreal feeling.

‘I carried on every single day, kept busy at work and kept my mind off it in the hope that it will all just go away.

‘But after that last procedure I got a call to meet with the consultant who told me that I am cancer-free.’

Now Ms Church is on a mission to raise awareness of the need to go for a regular smear test.

She said: ‘My smear test picked up the cancer, I’ve been through hell and now it’s over.’

She has shared her story on Facebook and has been overwhelmed by the response – with her post receiving more than 1,000 likes and shares and more than 500 comments in just 16 hours.

Ms Church has even been contacted by a major cervical cancer organisation who are keen to share her story.

In her post the brave mum explains what is involved in a smear test in the hope of reducing the stigma around going and reminding women that the small amount of discomfort could end up saving their lives.

‘Yeah it’s embarrassing, but I’d take that over anything I have had to deal with since August this year.

‘I’m lucky, I feel like the luckiest girl alive right now and I’m fully aware that some aren’t so lucky. My smear test saved my life.’

A smear test detects abnormal cells on the cervix, which is the entrance to the uterus from the vagina.

Most test results come back clear, however, one in 20 women show abnormal changes to the cells of their cervix.

In some cases, these need to be removed or can become cancerous.

Cervical cancer most commonly affects sexually-active women aged between 30 and 45.

In the UK, the NHS Cervical Screening Programme invites women aged 25-to-49 for a smear every three years, those aged 50 to 64 every five years, and women over 65 if they have not been screened since 50 or have previously had abnormal results.

Women must be registered with a GP to be invited for a test.

In the US, tests start when women turn 21 and are carried out every three years until they reach 65.

Changes in cervical cells are often caused by the human papilloma virus (HPV), which can be transmitted during sex.

In January 2018, women shared selfies with smeared lipstick on social media to raise awareness of the importance of getting tested for cervical cancer in a campaign started by Jo’s Cervical Cancer Trust.

Getting your temperature checked in the morning may be pointless: Covid-19 cases could be missed because fevers are more common in the evening, scientists...