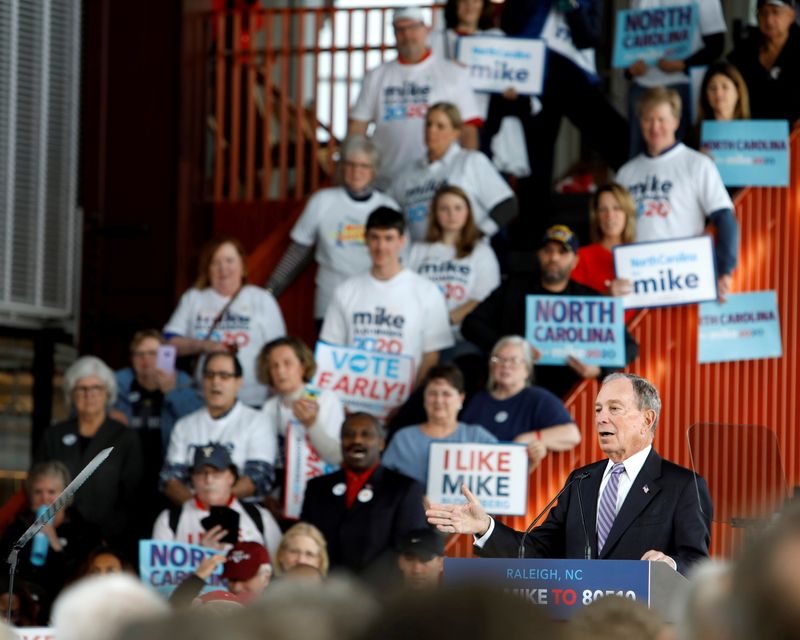 (Reuters) – U.S. Democratic presidential candidate Michael Bloomberg’s campaign is paying popular Instagram meme accounts to post content about the billionaire as part of its social media offensive ahead of the 2020 election.

The campaign, which has shelled out on a huge digital campaign to try and beat Republican President Donald Trump in November, has been working with a collective called Meme 2020 to create sponsored content that launched on multiple accounts this week.

In recent weeks, the Bloomberg campaign also posted an invitation on influencer marketplace Tribe, offering Bloomberg supporters a fixed fee of $150 to provide videos or images to the campaign.

The new, self-deprecating Instagram memes show fake messages between Bloomberg and the meme accounts, poking fun at the idea of him paying social influencers to ingratiate himself with young voters.

A post by @fuckjerry, an account with almost 15 million followers, shows an exchange where Bloomberg is shown asking, “Can you post a meme that lets everyone know I’m the cool candidate?”

The Instagram posts included disclaimers, but their satirical nature left some Twitter users wondering if the partnerships were real. Several used the disclaimer: “And yes this is really #sponsored by @mikebloomberg.”

Reactions in the posts’ comments were mixed, with some users finding the strategy funny and others criticizing Bloomberg’s wealth advantage over other candidates. Some slammed the former New York mayor over a 2015 recording of him discussing crime and minorities that surfaced this week.

“Mike Bloomberg 2020 has teamed up with social creators to collaborate with the campaign, including the meme world,” Bloomberg campaign spokeswoman Sabrina Singh said in a statement. “While a meme strategy may be new to presidential politics, we’re betting it will be an effective component to reach people where they are and compete with President Trump’s powerful digital operation.”

“We haven’t done a political campaign before,” said Reid Hailey, chief executive of Doing Things Media, which runs 12 of the meme accounts involved in the campaign, including @NeatDad and @GamersDoingThings. He said it was a creative decision, rather than an endorsement of Bloomberg.

The Bloomberg campaign has spent more than $70 million on Facebook (NASDAQ:FB) and Google (NASDAQ:GOOGL) ads in the last year, far outspending his Democratic rivals and Trump, according to Democratic digital firm Bully Pulpit Interactive.

The campaign’s digital arm is Hawkfish LLC, which Bloomberg founded as a counterweight to the Republican digital operation. It will be funded through November regardless of whether Bloomberg wins the nomination.

Woman, 24, who found sex so painful that she became scared...

Lazio come from behind to stun Inter Milan and move within...

How low can bond rates go?