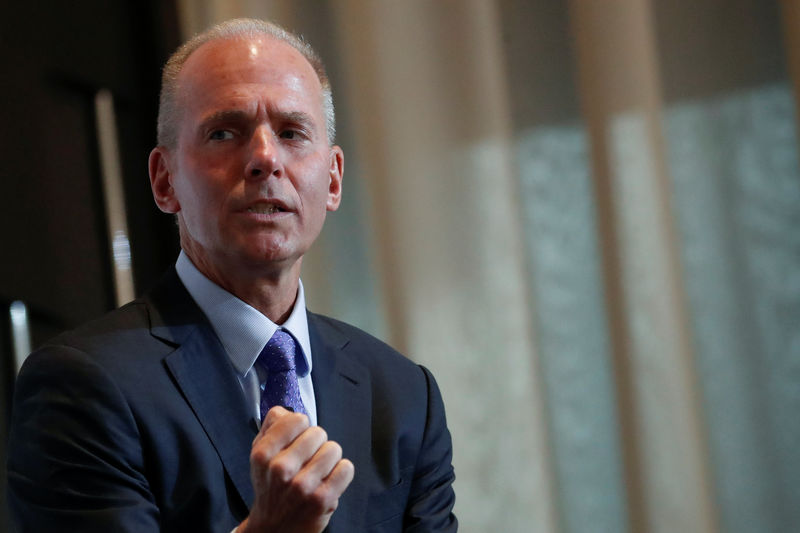 (Reuters) – Boeing Co’s (N:BA) board has stripped chief executive Dennis Muilenburg of his chairmanship title, in an unexpected strategy shift announced by the U.S. planemaker on Friday only hours after a global aviation panel criticized development of the troubled 737 MAX.

Separating the roles, which will enable Muilenburg to have “maximum focus” on steering daily operations, was the latest step the board has taken in recent weeks to improve executive oversight of its engineering ranks and industrial operations.

Lead Director David Calhoun, a senior managing director at Blackstone (NYSE:BX) Group, will takeover as non-executive chairman, Boeing said in its announcement, which came late on Friday afternoon without warning. It added that the board had “full confidence” in Muilenburg, who will retain the top job and remain on the board.

The decision came as Boeing struggles to get its best-selling 737 MAX back into service following a worldwide safety ban in March triggered by two crashes that killed a total of 346 people in Ethiopia and Indonesia.

It also comes some six months after Muilenburg survived a shareholder motion to split his chairman and CEO roles, part of the intense pressure he has faced during the worst crisis of his four years at the helm of the world’s largest planemaker.

“This decision is the latest of several actions by the board of directors and Boeing senior leadership to strengthen the company’s governance and safety management processes,” the company said.

Earlier on Friday, an international aviation panel criticized U.S. regulators and Boeing over the certification of the plane.

An internal review in August revealed that the company was working to reorganize its engineering reporting lines company-wide and ensure higher ranking officials, including its CEO, get faster feedback about potential safety concerns from lower levels of the company.

As part of the move, Muilenburg received granular weekly reports of potential safety issues discussed at meetings of rank-and-file engineers.

It also plans to name a new director with deep safety experience and expertise to serve on the board and its newly created Aerospace Safety Committee in the near term, Boeing said.

Muilenburg is set to testify before a U.S. House panel on Oct. 30 and lawmakers have raised questions about Boeing’s actions prior to the 737 MAX certification. Federal prosecutors aided by the FBI, the Transportation Department Inspector General and several blue-ribbon panels are investigating the plane’s approval.

The company is also facing more than 100 lawsuits over the crashes alleging design flaws allowed erroneous sensor data to set off an automated anti-stall system and overwhelm pilots.

Earlier this week, Reuters reported that a key certification test flight would likely not take place until at least Nov. 1, a move that will push its approval to resume flights until at least December.

On Friday, United Airlines Holdings Inc (O:UAL) became the latest U.S. airline to say it would not resume 737 MAX flights until January.

Shareholder advisory firms Institutional Shareholder Services Inc and Glass Lewis had urged Boeing to split the role of chairman and CEO in April, saying shareholders would benefit from a robust form of independent oversight.

Muilenburg is set to testify before a U.S. House panel on Oct. 30. Lawmakers have raised questions about Boeing’s actions prior to the 737 MAX certification.

US coronavirus deaths hit 130,000 as Florida's cases DOUBLE in less...