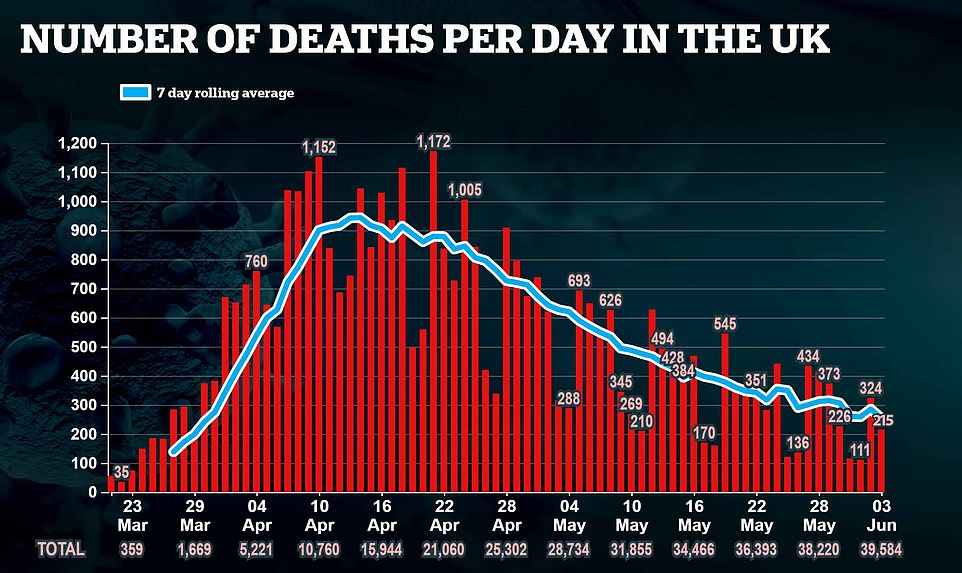 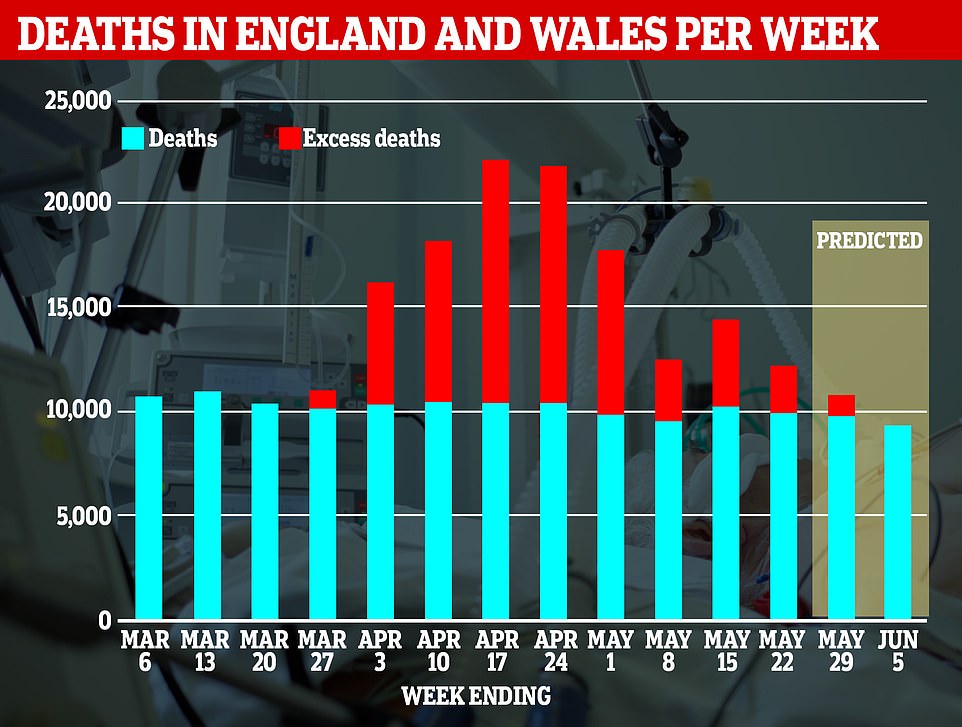 The number of excess deaths in England and Wales spiked dramatically during the peak of the coronavirus outbreak. Professor Carl Heneghan, an Oxford University epidemiologist, predicted that the number of people dying would fall to average levels again by July 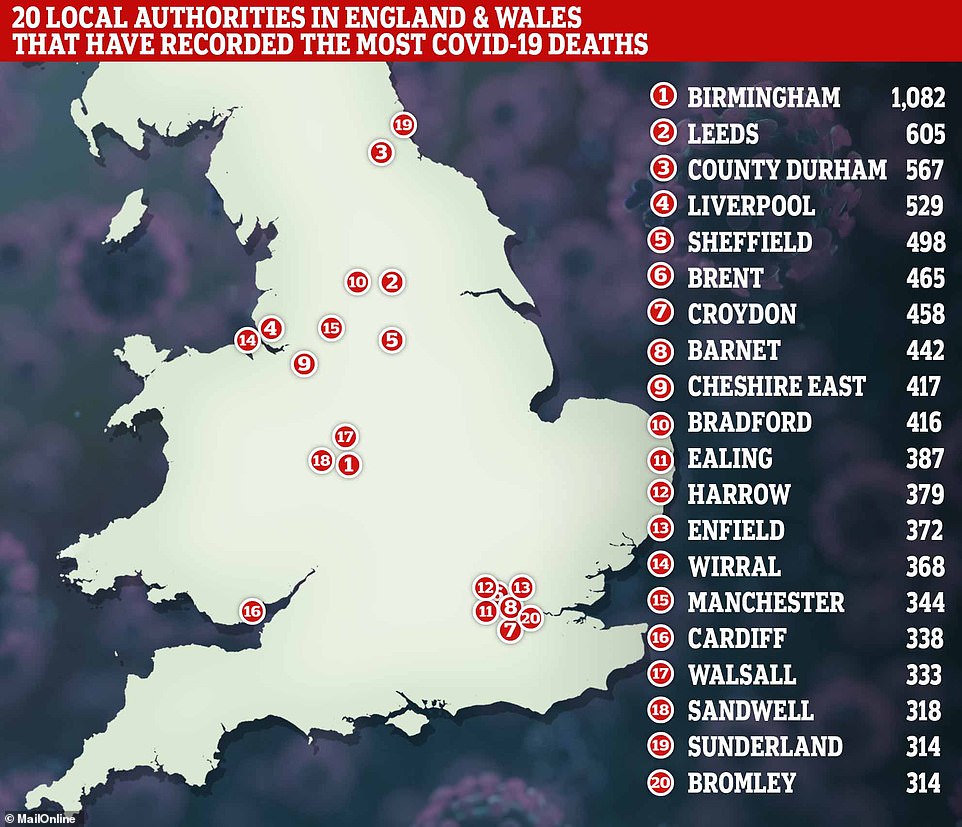 Separate data published yesterday showed that Birmingham has recorded the most deaths of diagnosed coronavirus patients, with 1,082 victims

Department of Health bosses have yet to confirm the final tally, which is expected to be higher because it takes into account deaths in all settings. The preliminary toll is calculated by adding up the updates provided by each of the home nations.

NHS England today recorded 179 more deaths in hospitals, while Wales posted 17 in all settings, followed by 11 in Scotland and eight in Northern Ireland. It means the official number of victims who have died after testing positive is now 39,584 – but other data including suspected deaths shows the true toll is almost 10,000 higher.

Health chiefs yesterday announced 324 deaths – a 68 per cent drop in the space of a fortnight. And a leading statistician predicted Britain is on track to have zero Covid-19 deaths by July.

It comes as a shocking analysis of data today revealed the coronavirus pandemic has driven up rates of excess deaths in some parts of London to double what they are in a usual year.

Official statistics show the number of Britons who died during the first five months of 2020 was massively higher than average because of the Covid-19 crisis, with 62,000 more victims than expected across the UK.

The London borough of Brent is the worst affected part of England and Wales by this measure, with the number of deaths soaring from 447 in January-May in an average year to 925 in 2020 – an increase of 108 per cent.

In other coronavirus news today:

Each nation’s health agency report their own figures. These numbers do not always match with the Department of Health count because of a difference in how they are recorded.

NHS England revealed four of the 179 new victims who died had no underlying health conditions. The youngest of the fatalities included a 12 year old who wasn’t named.

A separate batch of data analysed by The Telegraph shows that 17 out of the 20 worst affected places across the two countries are all boroughs of the capital.

As well as Brent, other parts of London that witnessed their death tolls approximately double were Harrow (99.7 per cent increase), Newham (95.4 per cent) and Enfield (90.3 per cent).

The highest increase in deaths outside of London was seen in Hertsmere in Hertfordshire, where fatalities rose by 86.2 per cent from 236 to 439.

And while not all of these people have been direct victims of the coronavirus, many have died because of indirect impacts of the outbreak, such as reduced NHS services.

The data includes people who died of any cause between January 1 and May 22 in each of the local authorities in England and Wales.

More than a dozen areas across the two countries actually appeared to be unaffected by the outbreak and saw the numbers of people dying fall to lower-than average levels.

In North East Lincolnshire the death rate dropped by 8.8 per cent, while it fell by 8.2 per cent in Conwy, Wales, and by five per cent on Anglesey, off the Welsh coast.

Excess deaths are considered to be an accurate measure of the number of people killed by the pandemic because they include a broader spectrum of victims.

As well as including people who may have died with Covid-19 without ever being tested, the data also shows how many more people died because their medical treatment was postponed, for example, or who didn’t or couldn’t get to hospital when they were seriously ill.

Experts are divided, however, on how accurate excess deaths are as a measure.

He said the average could have been expected to be higher because there are more people, and more elderly people, in the UK than there were in 2015.

If true, this could mean the impact of the Covid-19 epidemic was overestimated.

The weekly coronavirus death toll in England and Wales has dropped to its lowest levels since the lockdown began in March, promising statistics today revealed.

Data from the Office for National Statistics showed 1,983 people died across the two counties in the week ending May 22, down from 2,766 a week earlier and the lowest figure for two months.

Every week since March 27 has recorded more fatalities from the virus, showing that Britain is now en route to how it was before the unprecedented lockdown was imposed on March 23.

At the peak of the outbreak, a staggering 16,000 people in England and Wales died of the coronavirus in just two weeks in April.

But the sobering statistics also show that there have now almost certainly been more than 50,000 people killed by Covid-19 across the UK this year.

The coronavirus was listed as a contributing factor on the death certificates of at least 47,871 people by May 22, cementing Britain’s position as one of the worst-hit countries in the world.

He said: ‘Deaths this year were tracking pretty close to, but below, the five year average. There is no perfect baseline.

‘I still think [the five-year average] is useful to give an idea of trends, peaks and spikes, but it is not a precise measure.’

Professor Heneghan yesterday said he expects the number of deaths to have returned to normal by next week.

He said: ‘If the trends continue, the deaths look like they will be back to where they should be normally by next week.

‘There’s been a continued reduction in hospital deaths, care home outbreaks are coming down so the “all deaths” by (week) 22 I’m expecting will be back to where we should be.’

Professor Heneghan said there may be no Covid-19 deaths by the end of June – which would follow Spain yesterday. Italy is still reporting between 50 and 100 deaths per day, and France around 30.

‘But it also depends on what happens next, within sporadic outbreaks,’ Professor Heneghan said.

Experts say that unless care home and hospital outbreaks cannot be stopped, deaths caused by the coronavirus will continue at low levels.

Data published in The Telegraph showed that the top five worst affected areas were Brent, Harrow, Newham, Enfield and Hertsmere, which all had total death increases of more than 86 per cent.

Others in the 20 worst-affected areas, most of which were in London, were Croydon, Southwark, Merton, Hammersmith & Fulham, Waltham Forest, Mole Valley (Surrey), Lambeth, Redbridge, Greenwich and Surrey Heath.

At the other end of the scale, some more rural areas of the country saw the number of people dying drop from its usual level.

This may have been because those areas were relatively untouched by the coronavirus but the lockdown had other health benefits – reducing the transmission of flu, for example, which kills older people, or fewer car crashes.

Or it may simply have been because fewer people were dying anyway and the rate wasn’t increased by the virus as it was in other areas of the country.

The list of areas where the coronavirus appears to have had the least impact on the number of people dying is topped by North East Lincolnshire, where fatalities dropped by 8.8 per cent, and Conwy in Wales, where they fell by 8.2 per cent.

Other areas recording slightly lower than usual numbers of deaths in January to May were Gwynedd, Isle of Wight, Ceredigion, Mid Devon, North Devon and East Devon.