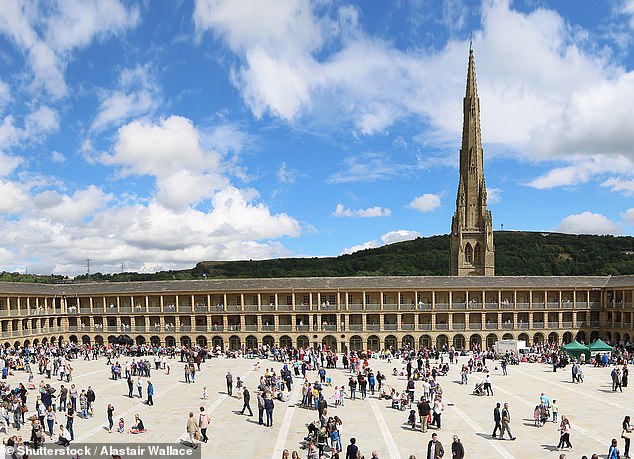 Continental feel: The Piece Hall in Halifax, a former cloth hall that is now a retail and social hub 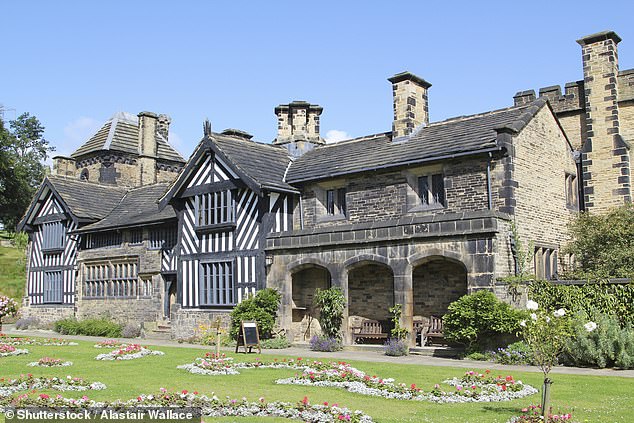 Just outside of the town of Halifax is Shibden Hall, a 15th-century house where industrialist Anne Lister once lived

Something isn’t quite right. Everyone in the grand Italianate piazza of The Piece Hall is basking in the afternoon sun as if on the Continent.

With a backdrop of honey-coloured colonnades and imposing arches, they sip local gin and watch the world go by. Yet this is Halifax in West Yorkshire.

The Grade I-listed Piece Hall’s origins explain the grand sweep of the piazza: built in 1779 as a cloth hall, it housed 315 merchants’ premises in a palatial neoclassical block around an outdoor trading place where ‘pieces’ of fabric were sold.

The three-storey sole survivor of the North’s cloth halls was threatened with demolition in the Seventies, but it was saved and, in 2017, it was redeveloped as a superb retail and social hub.

The Piece Hall is at the heart of a rejuvenated Halifax, which is steadily reworking stately buildings from its days as a textile boomtown to meet 21st-century needs.

Heritage buildings live again as bars, such as the teeny Grayston Unity, whose outdoor tables sit below florid putti on the neighbouring town hall’s fine facade. The 22-acre Dean Clough Mills — once the world’s largest carpet factory — is now a mix of offices, shops, gallery spaces and museums.

Sculptures from Yorkshire’s Henry Moore Institute surround the building, with a nine-metre phoenix overlooking the car park. Inside, corridors are lined with paintings and photos.

‘Please disturb. Just knock and come in,’ says a sign on the door of painter-in-residence Doug Binder.

Prince Charles has long believed in Halifax’s potential. When philanthropist Vivien Duffield wanted to set up a national children’s museum, he suggested land by Halifax station. The museum, Eureka!, has more than 300 interactive educational exhibits which teach young people about themselves and the wider world.

Another name drawing visitors to Halifax is lesbian industrialist, diarist and traveller Anne Lister, who was called ‘Gentleman Jack’ for her masculine appearance.

Lister, whose life was dramatised recently in a BBC series, lived at Shibden Hall, outside the town. ‘Last Bank Holiday Monday we had 60 visitors,’ says a guide excitedly. ‘This time we had 550.’

Lister modernised the 15th-century house upon inheriting it in 1836, panelling its Tudor walls in mahogany and adding a grand central staircase, whose double-helix banisters were copied from the altar rail at Halifax Minster, where Lister is buried.

After her death in Georgia in 1840, her body was repatriated by her ‘wife’ Ann Walker. Her broken tombstone was found under pews in 2000.

The Minster is an architectural mix, with Norman walls bleeding into the mainly 15th-century structure, rooftop coats of arms as vibrant as 500 years ago and a Victorian rood screen. Medieval misericords, which prop up clergy during long services, are carved with mermaids, green men and pelicans (Jesus in iconography).

There’s a Norman tomb dating to about 1150, on which a carved pair of shears defies the assumption that the cloth industry began in the 14th century. Proof, as if you needed it, that this is a place where the past always surprises.

Julia travelled with yorkshire.com and visitengland.com. Holdsworth House (holdsworthhouse.co.uk) has a B&B package including afternoon tea, dinner and two tickets to Shibden Hall for £88pp.

Great British boltholes: Hipsters want to be part of the inn crowd at The Crown, a 17th-century Oxfordshire pub in a quintessential English village

It's stag-gering! Buck moon – named as it shines as deer...

Moon's crust is richer in metals like iron and titanium than...

Uber to buy Postmates for $2.65 billion