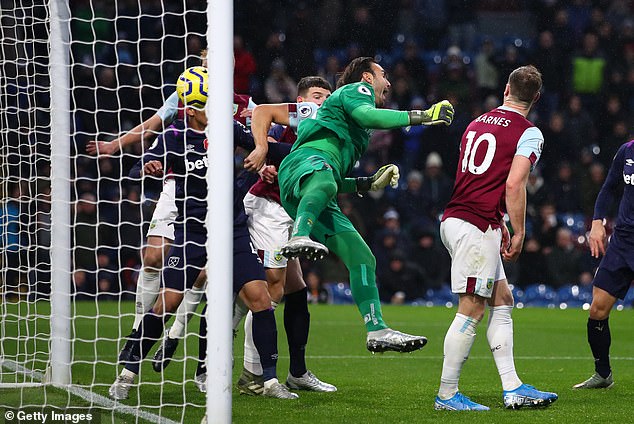 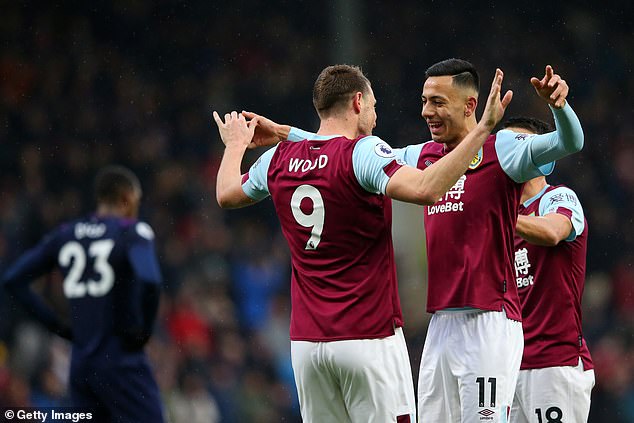 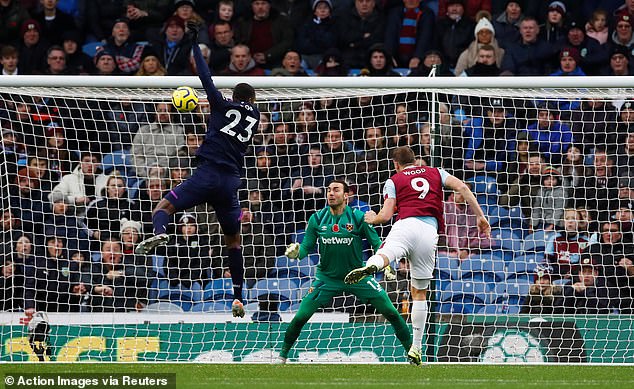 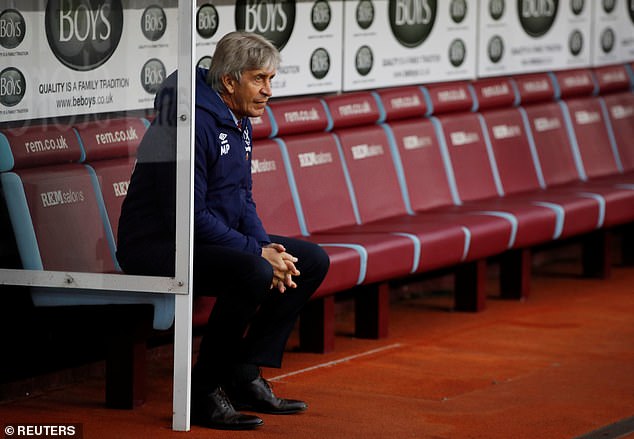 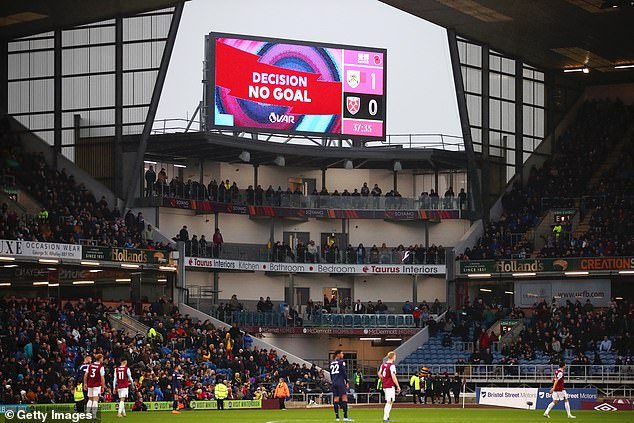 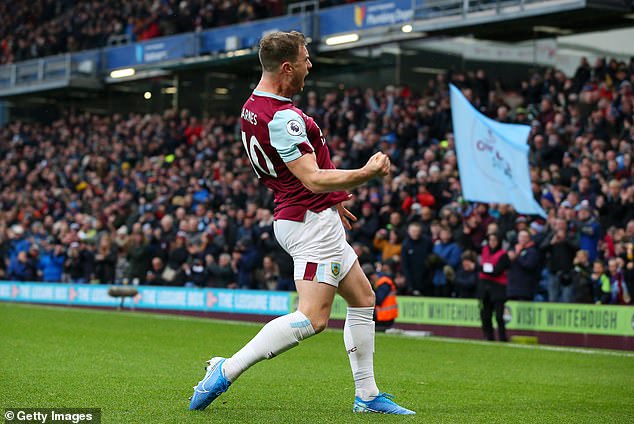 Ashley Barnes opened the scoring, netting his first goal since August after 11 minutes 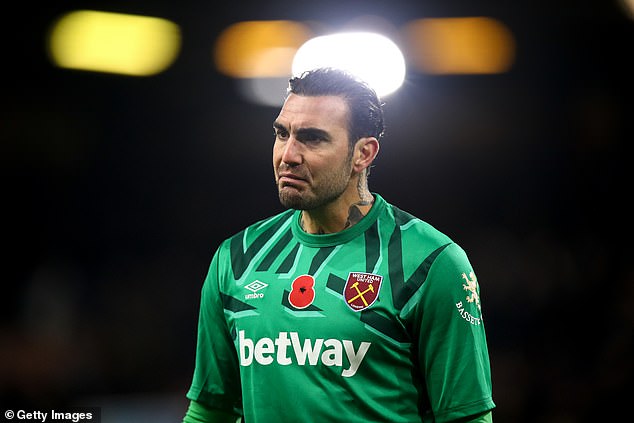 Roberto is filling in for injured Lukasz Fabianski, but has conceded 15 goals in six game

A tragicomedy in three parts. Painful, almost cruel. A worse goalkeeping performance you are unlikely to witness this season.

The thought of withdrawing Roberto must have crossed Manuel Pellegrini’s mind when the West Ham manager winced while slouched in the Turf Moor dugout, watching countless corners flapped at, listening to the roars of laughter from the stands.

Roberto is deputising for Lukasz Fabianski, the No 1 missing with a thigh injury until late next month. West Ham are stuck with a goalkeeper who has conceded 15 goals in his last six games.

They have earned one Premier League point from 15 available with him and this latest horror show was complete when he punched into his own net from an Ashley Westwood corner the Spaniard really ought to have eaten.

The defence have absolutely no faith in him. He does not communicate, evidenced when Fabian Balbuena headed behind for a corner with no Burnley player within 10 yards of him. Declan Rice went bursting back into his box to berate Roberto. Rice had seen enough.

So had Pellegrini, by that point – with West Ham three down – just slumped in his chair. It will be interesting to see whether the goalkeeper retains his place after the international break, with his team five points clear of the bottom three. David Martin, son of club legend Alvin, may be thrust into the spotlight.

All this detracts from Burnley’s excellence. They were brilliant, notably Dwight McNeil, whose reputation enhancement continues apace.

There should be no great surprise with how Burnley approached this. Invariably, victory is secured when required at home. Sean Dyche is a manager who gets reactions.

One badly needed here, following last week’s uncharacteristic capitulation at Bramall Lane. Ahead within 11 minutes through Ashley Barnes; home and dry by half-time through Chris Wood, the two strikers who signed new contracts in the week.

Barnes’s opener was predatory, holding his position in West Ham’s six-yard box to stab in James Tarkowski’s knockdown after Rice had been caught underneath McNeil’s corner. The corner that should never have been given, Barnes diverting Phil Bardsley’s shot wide after Roberto’s ill-judged punch with nobody near him.

West Ham rightly felt hard done by. The argument from VAR champions will be that the visitors had time to reset from the corner and it was a different phase of play but Kevin Friend’s decision was just plain wrong.

‘We conceded the first goal from a corner that was not a corner,’ Pellegrini said. ‘But when you concede so many easy goals it does not help. I am concerned at the easy goals we are conceding.’

VAR intervened to deny Wood later in the half, a marginal offside decision that was correct. Wood’s shoulder appeared just ahead of the last man, Ryan Fredericks.

The delivery by McNeil was something else, a moment of quality that underlined why so many are watching him. With shades of Beckham, McNeil engineered pace and whip and shape for Wood to thump a header past Roberto before it was disallowed. ‘What a ball in,’ Dyche beamed. ‘That’s the kind of power the kid’s got. I’ve told him to smile more or I will kick him.’

No matter, Burnley’s lead was doubled moments before the break. Roberto – poor, hapless, Roberto – put Balbuena under ridiculous pressure with a nonsensical throw.

Balbuena barely had time to turn and face play when McNeil robbed him of possession, charging down the line, squaring for Wood. Roberto got a hand to the striker’s first-time shot but could not prevent it going in. Wood impishly pretended to wear an earpiece in celebration. Ben Mee also had a goal ruled out for a foul.

Pellegrini’s side, lethargic and unadventurous on the ball, did not actually register a shot of any kind until the 48th minute, when Andriy Yarmolenko – who had replaced the injured Mark Noble – could only find Nick Pope’s midriff. ‘We’ve had a shot,’ the travelling fans chanted ironically.

‘We need to do the basics – the simple five-yard passing, the tackling,’ Rice said. ‘We were bullied all over the pitch – Burnley were winning everything. It’s not good enough.’

Roberto took centre stage again, punching into his own net from Westwood’s corner as Barnes stood crowding his space nine minutes into the second half. The 33-year-old decided to make some saves when three down, twice thwarting Wood, shovelling Bardsley’s rasping drive wide, stopping Jeff Hendrick and Jack Corn. In a way, those made what preceded them even more horrifying

Cristiano Ronaldo is angry over being snubbed for Serie A MVP,...

Sergio Ramos is suspended and it's GREAT news for Man City…...