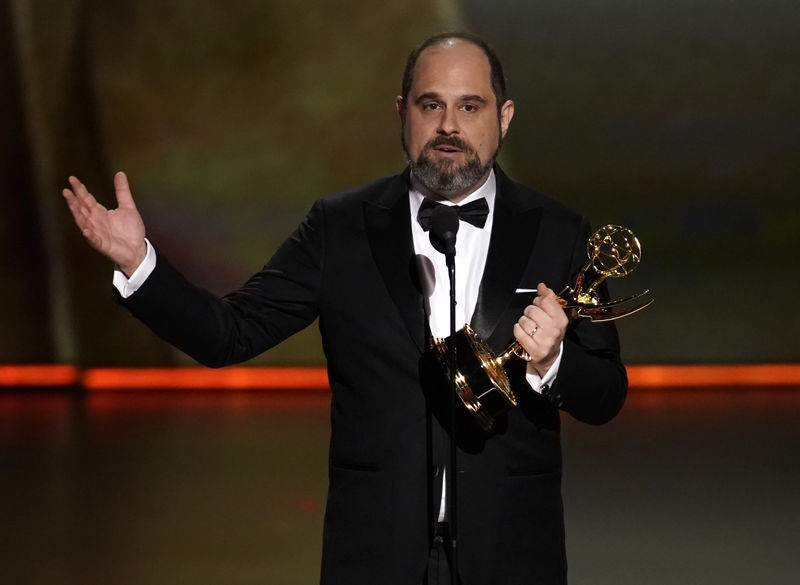 LOS ANGELES (Reuters) – Female-driven comedies “The Marvelous Mrs. Maisel” and “Fleabag” dominated the early awards at the Emmys on Sunday, picking up five statuettes for their stars and writers.

“It’s really wonderful to know, and reassuring, that a dirty, pervy, angry, messed-up woman can make it to the Emmys,” Waller-Bridge said.

Tony Shaloub won the award for supporting actor in a comedy for playing the pedantic dad in “The Marvelous Mrs. Maisel,” while Alex Borstein picked up the supporting actress Emmy for her role a tough manager in the Amazon comedy about a 1950s housewife turned stand-up comedian.

Bill Hader won his second Emmy for playing a hitman who turns to acting in “Barry.”

Airing without a host this year, it fell to an animated Homer Simpson from “The Simpsons” and “Breaking Bad” star Bryan Cranston to open the Emmy ceremony.

Presenters Jimmy Kimmel and Stephen Colbert, both previous awards show hosts, joked that in future nominees and winners would be announced by Amazon’s voice assistant, Alexa. An Alexa-style voice over then announced the lead comedy actress nominees.

HBO political satire “Veep” and returning Emmy champ “The Marvelous Mrs. Maisel” are seen as frontrunners in the contest for best comedy series that will be announced at the end of the three-hour show.

Already the most-awarded series in Emmy history with 38 wins, HBO’s “Game of Thrones” landed a record 32 nominations for its final season, including nine for its actors, despite a fan uproar over the conclusion of the series.

The medieval fantasy is expected to win a fourth Emmy on Sunday for best drama series.

Williams thanked the FX network for supporting her and paying her equally.

“They understood that when you put value into a person, it empowers that person to get in touch with their inherent value, and where do they put that value? They put it into their work,” Williams said.

HBO’s “Chernobyl,” which has drawn tourists to the 1986 nuclear accident site in Ukraine, won three Emmys, including best limited series.

“I hope that in some small way, our show has helped remind people of the value of the truth and the danger of the lie,” “Chernobyl” creator Craig Mazin said.

Newcomer Jharrel Jerome was named best actor for “When They See Us,” the Netflix (NASDAQ:NFLX) dramatization of the men known as the Central Park Five who were wrongly accused and imprisoned for rape in 1980s New York.

Jerome dedicated his honor to “the men we know as the exonerated five,” and the five men, seated in the audiences, stood and pumped their fists.

'That was the worst thing anyone had ever done to me':...