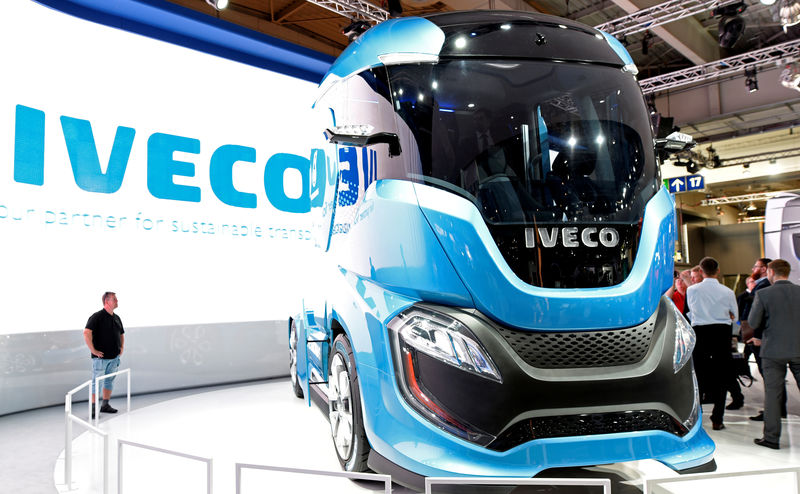 © Reuters. An Iveco truck is seen at the IAA Commercial Vehicles trade show in Hanover

Specific figures about investments in Europe are not yet available, unions FIM, UILM, FISMIC, UGLM and AQCFR said in a joint statement after meeting with Iveco Chief Executive Gerrit Marx in Turin.

Last month Italian-U.S. CNH Industrial said it would split in two and list its truck, bus and engine division in an effort to boost asset values and streamline its businesses.

A spokesman for CNH Industrial confirmed the figure provided by the unions for Iveco’s investments under a plan covering the period to 2024.

CNH Industrial said earlier this month it would invest 60 million euros and cut about 330 jobs in an overhaul of its Italian construction and engine plants.

Ficco said Marx made clear that no restructuring was planned at Iveco. He added that the company pledged to build new products at its Brescia plant in northern Italy, which is suffering from falling demand for medium-sized commercial vehicles such as the Eurocargo truck.

He quoted Marx as saying he was formally available to present a plan within the next 6-9 months identifying the products which would be manufactured in Brescia.

“It’s encouraging that Iveco bets on new technologies to boost its market shares, in particular on hydrogen engines, which are considered the most appropriate for heavy commercial vehicles,” Ficco said.