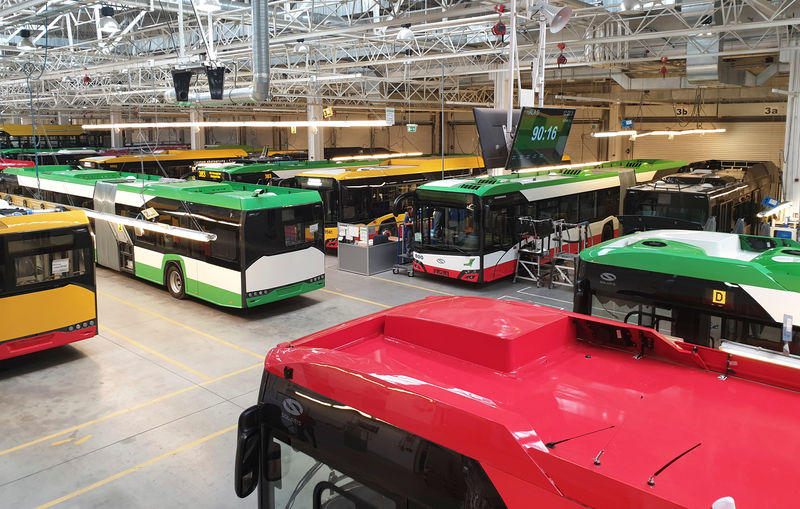 By Alan Charlish and Michael Kahn

WARSAW/PRAGUE (Reuters) – Poland is betting on electric batteries to turbocharge its economy, but its dependency on coal could challenge its strategy as the EU seeks to champion European manufacturers that promote clean energy.

Eastern Europe’s biggest economy is already a center for auto parts makers such as Michelin (PA:MICP), Valeo (PA:VLOF) and Denso. As carmakers shift to electric vehicles, spurred by efforts to combat climate change, Warsaw is counting on lithium battery production to carve out a niche in the auto industry’s ‘green energy’ generation manufacturing.

In the first quarter of 2019, Poland was the EU’s biggest exporter of lithium ion batteries – with sales of 361 million euros ($400 million) – after luring Asian battery makers led by South Korea’s LG Chem.

But the country’s twin dependence on Asian investors and coal energy poses risks longer-term as it collides with the European Commission’s ambitions to develop home-grown battery makers to take on currently dominant Asian rivals.

“To prevent a technological dependence on our competitors … Europe has to move fast in the global race,” the European Commission, which launched the European Battery Alliance in 2017 to bring players together and build a battery industry, says in a report on its strategy.

Europe’s battery market could be worth 250 billion euros by 2025, the report says, and the Commission’s objectives include supporting “the sustainability of an EU battery cell manufacturing industry with the lowest environmental footprint possible.”

Poland generates 80% of its power from heavily polluting coal. While the ruling nationalist Law and Justice party (PiS) has pledged investment in photovoltaic, offshore wind and nuclear power to cut emissions, it still expects half of the country’s electricity to be generated from coal by 2050.

Poland led eastern EU states in blocking an EU move to commit the bloc to net zero emissions by 2050, arguing that post-communist states need more time to make the transition.

“Poland needs to solve this issue because electric battery production should be more or less carbon neutral in the long term,” said Stefan Bratzel of the Center of Automotive Management in Germany.

“It makes no sense to produce the battery cell with a rucksack of coal.”

For now, Poland’s low cost manufacturing base is a bigger factor than its use of fossil fuels in the eyes of many foreign investors, although it faces competition.

Warsaw’s aggressive push gives it an edge over its neighbors though, analysts say, with corporate tax breaks of up to 70% and cash grants on offer.

“Europe can have a strong sector here and of course Poland should be one of the countries where it is stronger,” Javier Calleja, chief executive of Poznan-based electric bus maker Solaris Bus & Coach, which was acquired by Spain’s CAF Group last year. It plans to expand production to over 500 electric buses in 2020, from around 300 this year.

But the country’s lead in battery production will be tested as European carmakers enter the sector.

Europe’s biggest carmaker Volkswagen (DE:VOWG_p) plans to open a battery plant in a joint venture with Sweden’s Northvolt AB in Salzgitter, Germany next year, while France and Germany have sought EU Commission approval for a battery cell consortium including carmaker PSA, its German subsidiary Opel and French battery maker Saft.

Jobs created by the battery sector have helped push Poland’s unemployment rate down to a record low of 5.1%.

LG Chem’s Wroclaw plant will employ 6,000 people by 2021, according to the Polish Investment and Trade Agency, and will produce more than half of the South Korean company’s global battery output by the end of this year.

But for Poland to maintain its competitive edge in the sector and the economic benefits that come with it, the country will have to adapt as Europe’s car industry transforms.

“I don’t feel it’s either-or,” Poland’s minister for entrepreneurship and technology, Jadwiga Emilewicz, told Reuters when asked if Poland was too dependent on Asian battery makers.

In the past few years the country has seen a handful of niche domestic companies emerge in the sector, including Recupyl Polska, which recycles Li-ion batteries and uses technology of France’s Recupyl, a pioneer in recycling batteries for electric vehicles.

“We’ve got some advantages in technology especially regarding recycling,” Emilewicz said. “The question is whether we are able to create some kind of Polish value in the value chain.”