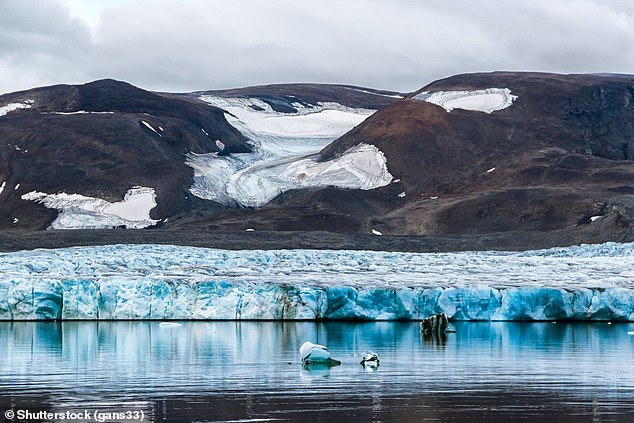 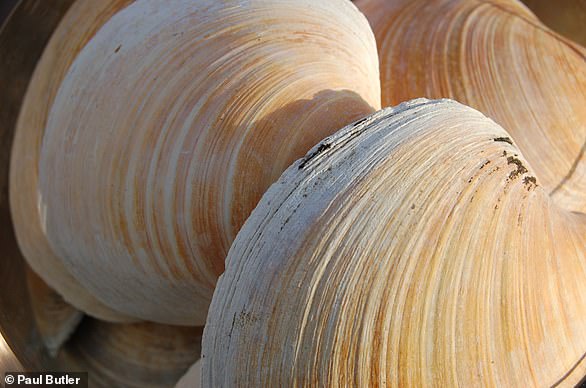 Quahog clams are thought to be the longest-living non-colonial animal on Earth, and their shells produce growth rings which can be examined to measure past environmental changes

Damage to the ozone layer may have been responsible for half of Arctic warming over the span of 50 years, a new study claims.

ODS, a group of very potent greenhouse gases, are halogen compounds that destroy the protective layer of ozone in the upper atmosphere.

They may be responsible for 50 per cent of Arctic warming and sea ice loss from 1955 to 2005 and nearly one third of global average warming during that period.

Ozone is a molecule comprised of three oxygen atoms that occurs naturally in small amounts.

In the stratosphere, roughly seven to 25 miles above Earth’s surface, the ozone layer acts like sunscreen, shielding the planet from potentially harmful ultraviolet radiation.

It is produced in tropical latitudes and distributed around the globe.

Closer to the ground, ozone can also be created by photochemical reactions between the sun and pollution from vehicle emissions and other sources, forming harmful smog.

In the 1970s, it was recognised that chemicals called chlorofluorocarbons (CFCs), a type of ODS, used in refrigeration and aerosols, were destroying ozone in the stratosphere.

In 1987, the Montreal Protocol was agreed, which led to the phase-out of CFCs and, recently, the first signs of recovery of the Antarctic ozone layer.

At lower latitudes, the upper stratosphere is also showing clear signs of recovery, suggesting the Montreal Protocol is working well.

‘These compounds, in addition to causing the ozone hole over Antarctica, have long been recognised at powerful greenhouse gases,’ the researchers write in Nature Climate Change.

‘While much less abundant that carbon dioxide, ODS are much more powerful greenhouse gases on a molecule-by-molecule basis.’

ODS were developed in the 1920s and 1930s and used as propellants, refrigerants and solvents during the 20th century.

They were being emitted into the atmosphere in substantial quantities in the late 1950s in particular.

But the discovery of the ozone hole of Antarctica, which causes unique atmospheric and chemical conditions there at certain times of the year, led to the phase-out of the production.

Since the Montreal Protocol, an agreement to protect the stratospheric ozone layer in 1987, ODS emissions have been curbed and the ozone layer is now in slow recovery.

However, ODS are potent greenhouse gases and have long atmospheric lifetimes, so they can add substantially to the anthropogenic greenhouse effect.

Corresponding author of the study Lorenzo Polvani and his colleagues at Columbia University in New York used a climate model to estimate what amount of climate warming can be attributed to ODS.

The team simulated two worlds – one with natural and human emissions as measured between 1955 and 2005, and another with ODCs and their ozone impacts removed – to measure net impact of ODSs on the climate.

Their models showed that when ODS numbers are kept fixed, forced Arctic surface warming and forced sea-ice loss are only half as large as when ODS are allowed to increase.

The results suggest that continued phase-out of ODS will help mitigate Arctic warming and sea ice melt in the future.

‘If our findings are confirmed by future studies, the role of the Montreal Protocol as a major environmental treaty will assume a new dimension,’ the researchers state.

ODS are generally very stable in the troposphere – Earth’s lowest atmospheric layer –and only degrade under intense ultraviolet light in the stratosphere – the second major layer of Earth’s atmosphere.

Once in the stratosphere, they release halogen atoms through photodissociation which catalyse the breakdown of ozone (O3) into oxygen (O2).

A team of scientists led by the University of Exeter used the shells of quahog clams, which can live for hundreds of years, and climate models to discover how Arctic sea ice has changed over the last 1,000 years.

They found sea ice coverage shifts over timescales of decades to centuries – so shrinking ice cannot be expected to return rapidly if climate change is slowed or reversed.

The study examined whether past ice changes north of Iceland were ‘forced’ (caused by events such as volcanic eruptions and variations in the sun’s output) or ‘unforced’ (part of a natural pattern).

At least a third of past variation was found to be ‘forced’ – showing the climate system is “very sensitive” to such driving factors, according to lead author Dr Paul Halloran, of the University of Exeter.

“There is increasing evidence that many aspects of our changing climate aren’t caused by natural variation, but are instead ‘forced’ by certain events,” he said.

“Our study shows the large effect that climate drivers can have on Arctic sea ice, even when those drivers are weak as is the case with volcanic eruptions or solar changes.

Co-author of the study Professor Ian Hall, from Cardiff University, said: ‘Our results suggest that climate models are able to correctly reproduce the long-term pattern of sea ice change.

‘This gives us increased confidence in what climate models are telling us about current and future sea ice loss.’

When there is lots of sea ice, some of this drifts southwards and, by releasing fresh water, can slow the North Atlantic Ocean circulation, otherwise known as the Atlantic Meridional Overturning Circulation (AMOC).

The AMOC brings warm water from the tropics towards the Arctic, so slowing it down cools this region and allows sea ice to grow further.

So, with less ice the AMOC can bring in more warm water – a so-called ‘positive feedback’ where climate change drives further warming and sea ice loss.

Quahog clams are thought to be the longest-living non-colonial animal on Earth, and their shells produce growth rings which can be examined to measure past environmental changes.

Dr Halloran is part of the Global Systems Institute, which brings together experts from a wide range of fields to find solutions to global challenges.

The new study is part of a project including Cardiff University, the Met Office and an international team working on climate model simulations of the last millennium. The work was funded by the Natural Environment Research Council.

The paper, published in the journal Scientific Reports, is entitled: “Natural drivers of multidecadal Arctic sea ice variability over the last millennium.”

“Why is it still open?” Inmates at Parchman’s Unit 29 describe...