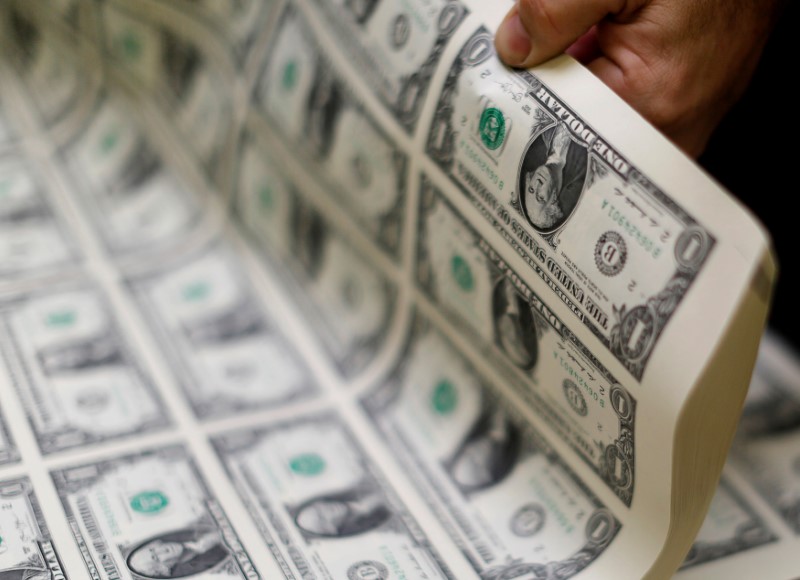 NEW YORK (Reuters) – Storm clouds are gathering over the U.S. dollar, threatening a two-year rally in the currency that has squeezed corporate profits and angered President Donald Trump.

Dollar bullishness in future markets stands at its lowest level in more than a year-and-a-half, according to the most recent data from the Commodity Futures Trading Commission measuring the net dollar amount of bets on a rising greenback.

Analysts at Bank of America Merrill Lynch (NYSE:BAC) say the dollar triggered a so-called “Death Cross” on the last day of 2019. The bearish technical formation occurs when the 50-day moving average crosses below the 200-day moving average, something that has been followed by a period of dollar weakness in seven out of eight instances since 1980, the bank said in a recent report.

Easing worries over global trade and Brexit are stoking investor appetite for risk, pushing them out of safe haven assets like the dollar, said Mark McCormick (NYSE:MKC), global head of foreign exchange strategy at TD Securities.

“The global economy looks like it’s healing,” he said. “The reduction of uncertainty will likely allow investors to take risks … they didn’t want to take before.”

Because of the dollar’s central role in the global financial system, gauging its path is important for corporations and investors. Over the last several years, the currency has withstood a number of factors that analysts believed would pull it lower, including a dovish turn by the Federal Reserve and fears of a U.S. growth slowdown.

UBS, Schroders (LON:SDR) and Société Générale are among banks calling for the dollar to fall this year. DoubleLine Capital’s Jeffrey Gundlach has also told investors he believes the dollar’s next big move will be lower.

The buck’s long stay near the top of its trading range has weighed on the balance sheets of multinationals like Procter & Gamble Co (N:PG) and Whirlpool Corp (N:WHR), making it less profitable for them to convert foreign earnings into dollars.

Trump has complained about the dollar’s strength, in part because it makes U.S. products less competitive abroad. An index that measures the dollar against the currencies of the largest U.S. trading partners stands near an all-time high.

Momtchil Pojarliev, head of currencies at BNP Asset Management, believes that trend will soon reverse. He is betting the dollar will fall against the euro, Japanese yen and Australian dollar as growth in those countries accelerates and their central banks raise interest rates while the Federal Reserve keeps them steady. That should narrow the gap in yields that has buoyed the U.S. currency.

A few central banks already appear to be shifting to a less dovish stance. The Reserve Bank of New Zealand surprised investors when it left rates unchanged at its November meeting, while Sweden’s central bank last month became the first to raise rates back to zero from negative territory.

The European Central Bank, for its part, has signaled that it is done cutting rates for now.

Richard Benson, co-chief investment officer at Millennium Global Investments in London, likes a range of emerging market currencies, including the Mexican peso and Indian rupee. He expects the currencies of developing countries to rise against the dollar as global growth picks up.

Others though believe that any dollar weakness will be short-lived.

Lee Ferridge, North American head of multi-asset strategy at State Street (NYSE:STT) Global Markets in Boston, doubts that yield spreads between the United States and other developed countries will narrow enough to dent the dollar’s appeal.

In fact, a sharp slowdown in U.S. growth would likely send nervous investors back into the dollar, he said.

Exclusive: If Lebanon needs financial aid, France will be there, finance...