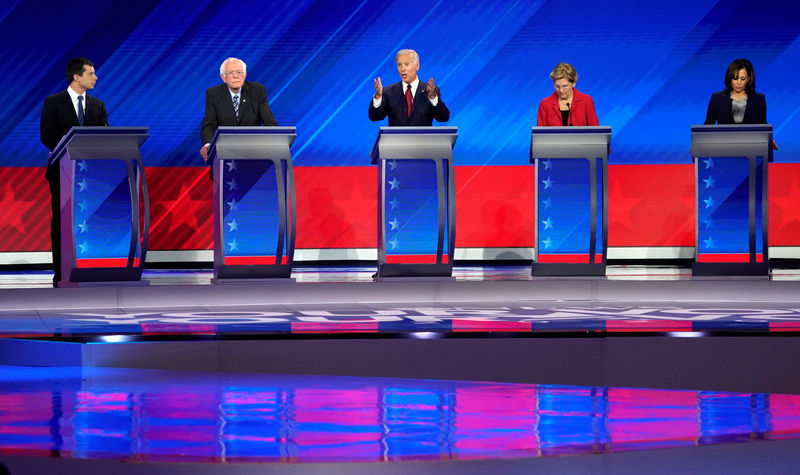 By Ernest Scheyder and Joseph Ax

HOUSTON (Reuters) – The Democratic presidential contenders headed back to the campaign trail on Friday after a debate that largely reinforced former Vice President Joe Biden’s front-runner status and left his rivals searching for a formula to knock him out of the top spot.

The candidates who participated in Thursday night’s debate in Houston, and those scrambling to try to qualify for next month’s debate in Ohio, have less than five months to plead their case to voters before the first nominating contest in Iowa on Feb. 3, 2020.

In Houston, Biden clashed with liberal rivals Elizabeth Warren and Bernie Sanders on healthcare, challenging the two U.S. senators to be honest about the cost of their plans.

Biden came under fire from former U.S. Housing Secretary Julian Castro, whose comments incorrectly accusing the former vice president of forgetting what he had just said were seen as an attack on the Biden’s age. And Biden’s answer to a question about racial inequality in schools prompted a rebuke from rival U.S. Senator Cory Booker.

But the top 10 Democratic candidates, sharing the debate stage for the first time after the party toughened the rules to qualify, also stressed their shared opposition to Republican President Donald Trump more often and pared back some of the bickering that marked the first two debates this summer.

Biden was sharper and more aggressive than in the earlier matchups, leaving him in a strong position as his rivals evaluate the best strategy in the race to pick a Democratic challenger to Trump in the November 2020 election.

“I’m going to continue to talk about why we need to unify the country around our common goals and our aspirations and our common problems,” U.S. Senator Kamala Harris of California, who refrained from attacking her rivals during the debate, told reporters afterward.

Several major events are on the campaign schedule in coming weeks. Biden, Sanders and at least three other candidates are expected on Monday to attend the Galivants Ferry Stump meeting in South Carolina, a state party tradition dating back to 1876.

The next weekend, 18 candidates will attend the Polk County, Iowa, steak fry, a regular stop for presidential contenders, and at least 10 candidates will participate in a forum on LGBTQ issues.

After that, Democrats plan up to nine more debates, beginning next month in Ohio.

At least one more candidate, billionaire activist Tom Steyer, has met the heightened qualifications for the next debate, meaning it is likely to be spread over two nights as the first two were in June and July.

Candidates who do not qualify for that debate, and those on stage on Thursday who are struggling in opinion polls, will have to decide whether they have a reason to keep running. Aside from Biden, Sanders and Warren, none of the other 17 Democratic contenders is regularly hitting double digits in support in the polls.

CASTRO ON THE OFFENSIVE

Castro led the charge on Thursday against Biden by accusing him of flip-flopping in his description of his own healthcare proposal.

“Are you forgetting what you said two minutes ago?” Castro, 44, asked Biden, 76, who has faced questions about his age.

Later, he accused Biden of being quick to tie himself to former President Barack Obama when it suited him and walk away when it did not. Biden was vice president under Obama for eight years.

“I’m fulfilling the legacy of Barack Obama and you’re not,” said Castro, who also served in Obama’s administration.

“That’ll be a surprise to him,” Biden responded.

Biden, who served under the first black U.S. president and enjoys strong support from likely black primary voters, also drew criticism for his response to whether Americans had a duty to repair the legacy of slavery.

Biden transitioned into an answer related to education that suggested bringing social workers into homes of black families to “help them deal with how to raise their children” and having a “record player on at night” to help with language acquisition.

Booker said on CNN after the debate that Biden is sometimes “meandering in his speech,” adding that a lot of people are concerned about whether he can “carry the ball all the way across the end line without fumbling.”

“He’s talking about people in communities like mine listening to record players. … There are definitely moments when you listen to Joe Biden and you just wonder,” Booker said.

Other candidates avoided the attacks that marked the first two rounds of the debates. Those exchanges had dismayed some Democrats, who urged the candidates to focus on laying out their own positive agendas.

Biden praised former U.S. Representative Beto O’Rourke for his work after a mass shooting in his hometown of El Paso, Texas, drawing a sustained ovation from the debate crowd.

O’Rourke, who has called for gun licensing and a mandatory gun buyback for assault weapons, was asked if he was going to take away people’s guns.

That response quickly drew criticism from Republicans. U.S. Representative Liz Cheney, a member of the House Republican leadership, on Friday called it “one of the most concerning moments that came out of a debate that had a lot of concerning moments.”