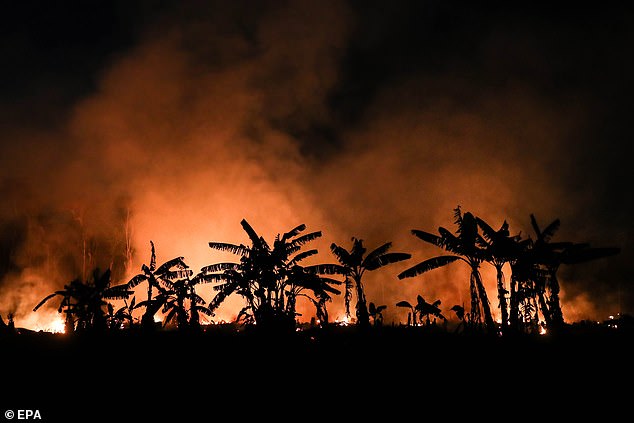 Earth lost more than 26million hectares of trees each year from 2014-2018, which could drastically impact wildlife and climate change. Pictured: the apocalyptic scenes in the Amazon earlier this week have added to the losses the report covered 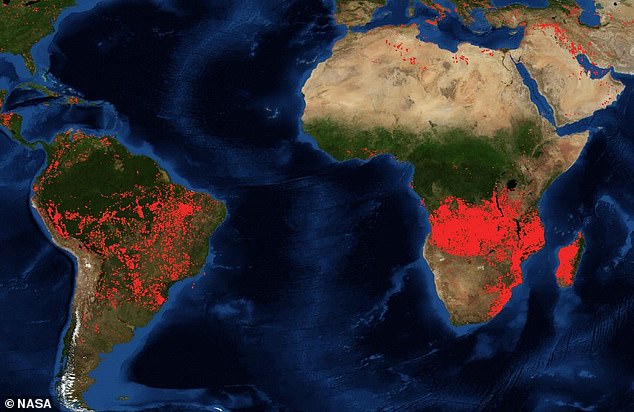 This NASA image from the end of August shows fires raging just as strongly in sub-Saharan Africa as in the Amazon rainforest in South America, where the fires have attracted global attention 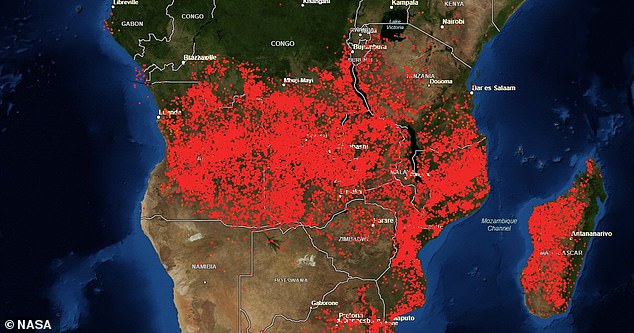 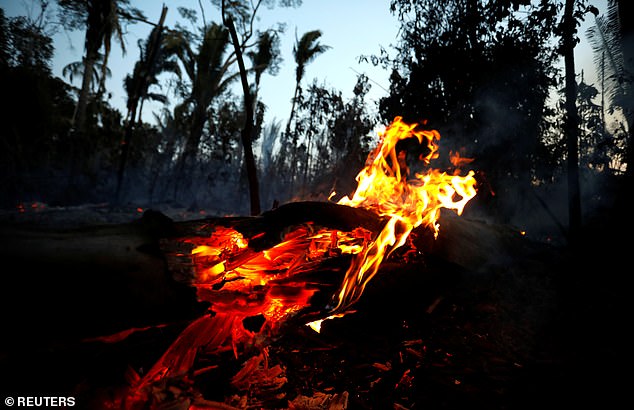 The Climate focus report factored in data up to 2018, so it does not include the devastation seen in recent weeks in the Amazon (pictured on Wednesday) 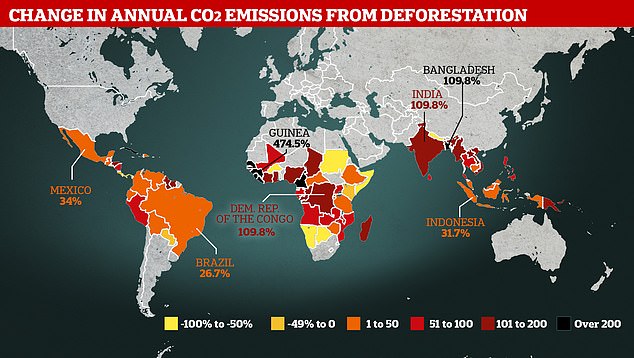 Huge swathes of forests the size of the UK are disappearing around the world each year, a new report has found.

Earth lost more than 26million hectares of trees each year from 2014-2018, which could drastically impact wildlife and climate change.

This comes despite pledges by governments to slash by at least half losses of natural forests by 2020.

This is now deemed ‘impossible’, as deforestation has soared in the five years since it was set, warned Climate Focus, a think-tank that led the report.

The 2014 New York Declaration on Forests garnered more than 200 signatories by countries, companies and green groups.

These included the governments of Colombia, Norway and the US, as well as consumer goods giants such as McDonald’s and Walmart.

The 26million hectares burnt yearly from 2014-2018 represented a 43 per cent jump in the global rate of tree loss compared with the period 2001-2013, said the report issued on Thursday ahead of a UN climate summit on September 23.

Tropical forests accounted for about 90 per cent of global deforestation from 2001-2015, it added.

Their annual rate of loss rose by 44 per cent in the 2014-2018 period, mostly due to land being cleared to produce agricultural commodities such as beef, soy and palm oil.

The effects are worst in the major tropical rainforest areas of South America, south east Asia and Africa, where the rate of loss rapidly increased between 2014-2018 compared to 2001-2013.

Africa saw the greatest rate increase – from 2million to 4million – while South America had the largest loss by volume.

The think-tank report factored in data up to 2018, so it does not include the devastation seen in recent weeks in the Amazon.

But the researchers found deforestation in the Brazilian rainforest rose by 88 per cent in June, when compared to June 2018.

The widespread fires in the Amazon and Congo Basin in recent weeks has stormed up the global agenda – and a UN climate science report backed forest protection as a key pillar of action to curb global warming.

But the emissions released when they are destroyed by burning or felling spur rising temperatures, which in turn increase the threat to forests.

Charlotte Streck, co-founder and director of Climate Focus, said: ‘The world is on fire… The vulnerability of the forests has become obvious.’

She added: ‘We seem to be in an age where there is a lot of talk and not enough action.’

While large campaigns to plant new trees have been launched from Asia’s Mekong Delta to El Salvador and Ethiopia, Streck said those cannot make up for loss of natural and old forests.

She said: ‘They harbour a lot more biodiversity, they are much richer in carbon, they offer all these ecosystem services in a much more complete way than restored forest.’

The report also evaluated other goals in the New York declaration, finding that less than one-fifth of a pledge to restore 150million hectares of degraded land by 2020 had been achieved so far.

In addition, it said none of the 350 most influential companies whose operations affect forests was on track to fulfil commitments to make their supply chains free of deforestation by 2020.

In general, corporate commitments were too weak to be effective, rarely covering all supply chains, and there was too little reporting on actions taken and their impact, it added.

Dzaeman Dzulkifli, executive director of the Tropical Rainforest Conservation and Research Centre in Kuala Lumpur, said there was a disconnect between global-level promises and what it takes to restore forests in a meaningful way.

Recreating forests ‘where you have mixed species of all kinds of things, it takes time’, he said.

Streck said despite the gloomy evidence, an international push should be launched in New York this month to renew promises to protect the world’s forests, and try to join up the many actions now taking place.

Indonesia has been a bright spot, she noted, where government bans on clearing peatland and on new concessions for logging and plantations have been complemented by more palm oil companies earning certification for sustainable production.

Other measures that would help on a global scale include regulating demand, as already seen with laws in the US and Europe to prevent trade in illegally logged timber, the report said.

It also called for more international funding to stop deforestation in tropical countries.

Investments to that end comprise less than 1.5 per cent of all money allocated by multilateral institutions and developed states since 2010 to curb climate change, it said.

Streck also urged reforms to the hundreds of billions of dollars in agricultural subsidies provided around the world each year, to ensure they do not support activities that harm forests.

Ingrid Schulte, who coordinated the assessment, pointed to a failure to transform underlying economic incentives that favour forest destruction over forest protection.

She said in a statement: ‘Halting forest loss will take a serious systemic shift in behaviour – from everyone – by reducing demand for commodities that carry embedded deforestation, reducing meat consumption, and investing in governance and protecting the rights of indigenous peoples.’