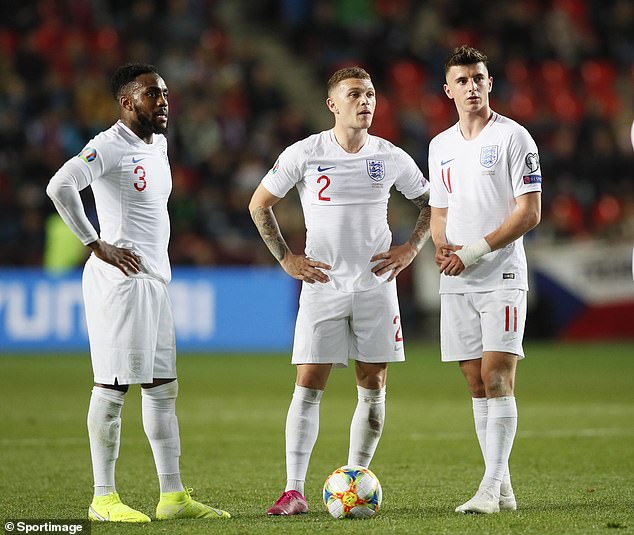 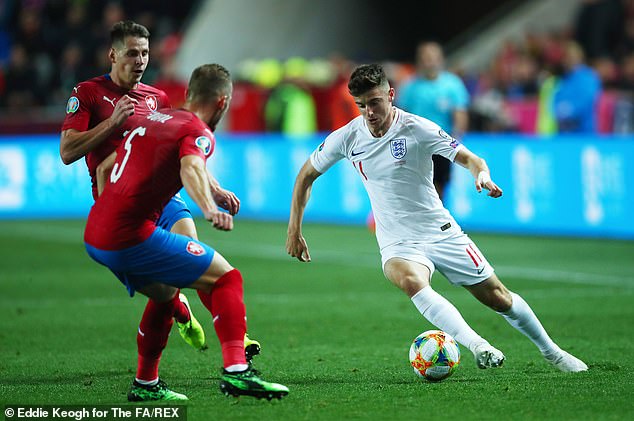 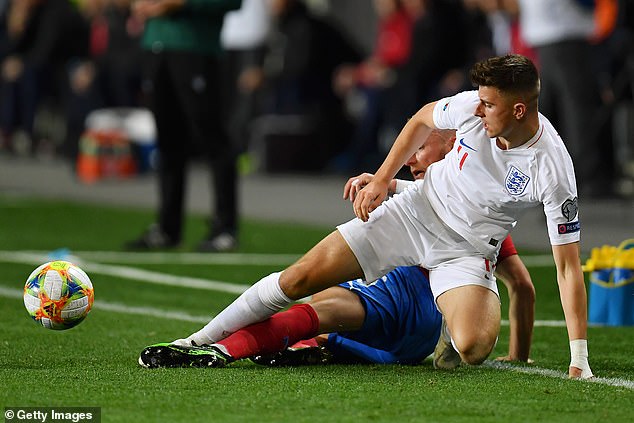 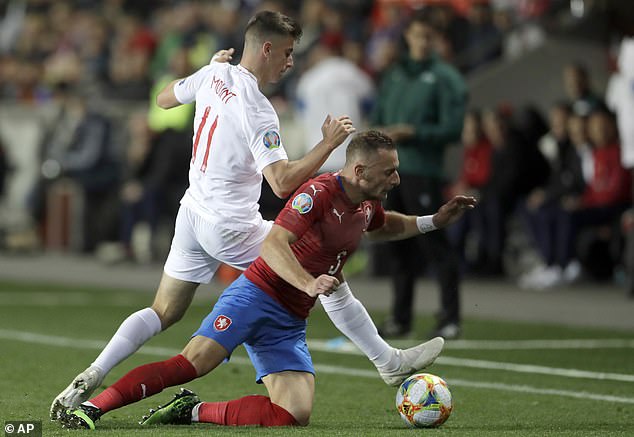 With qualification looking likely, this was the perfect opportunity to blood Mount into the side 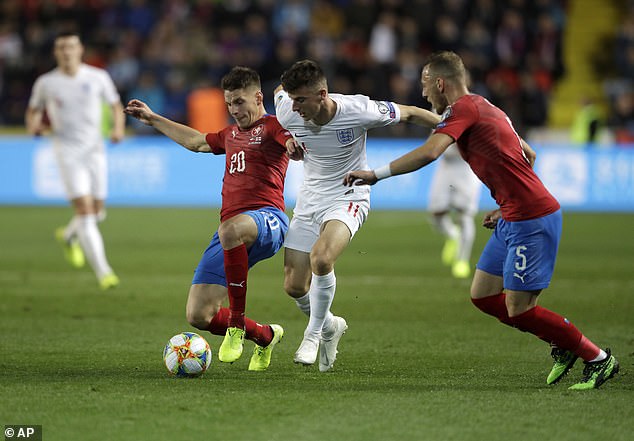 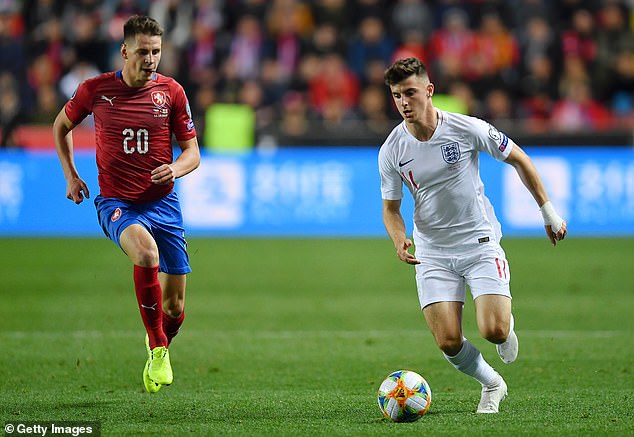 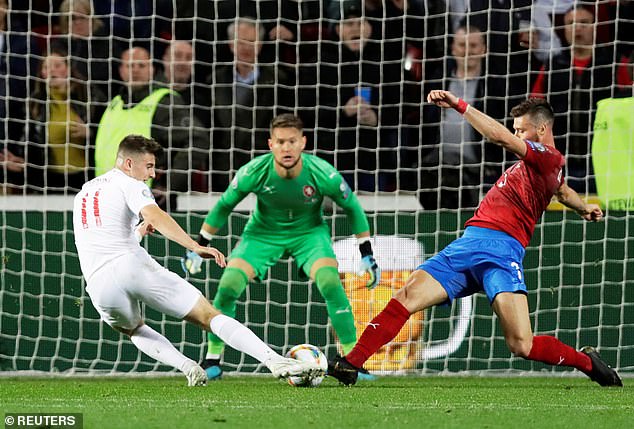 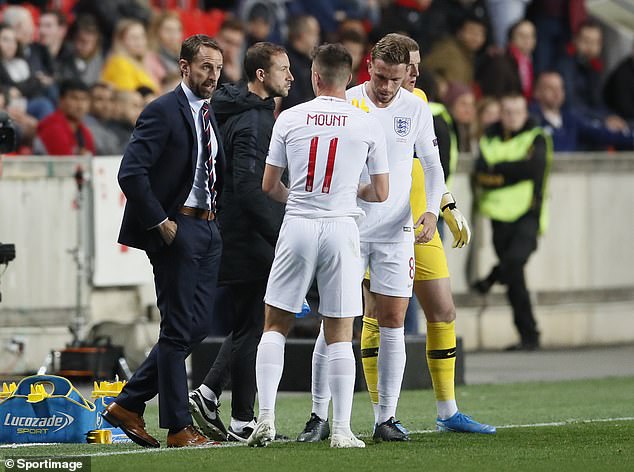 When Mason Mount was growing up in Portsmouth, playing for teams called Boar Hunt Rovers and United Services, his Dad always had four words for him.

Technique was never an issue. Here was a gifted boy, comfortable on the ball and capable of producing magic, but Tony Mount knew talent alone was not enough to realise his potential. So, with great regularity, fatherly advice would arrive in a short, snappy sentence: do the hard work.

On the days when it was not possible to play with freedom and imagination, Mount made himself a persistent scurrying nuisance, someone who would not be muscled out of games. This little kid was not for pushing around.

‘I always want to introduce that into what I am doing now,’ Mount told Sportsmail last September, after a sparkling debut for the Under-21s in Latvia. ‘I don’t just want to be an attacking player, who gets into the box and scores goals. I want to do the dirty side too.’

Watching his first England start unfold in Prague, that story came to mind. Gareth Southgate had made space for the Chelsea midfielder, whose development has been one of the happiest themes of this season, and wanted to see how he performed as England’s No10.

Sometimes a player emerges with something a little bit different and the esteem in which club and country have held him goes back years. Southgate, for instance, remembers the first time their paths crossed at the National Football Centre when he was doing things that 16-year-olds don’t usually do.

‘He’s quality,’ Southgate explained in the build-up to this latest Group A assignment. ‘An intelligent footballer who presses well; he has a real eye for goal, good quality. We have had him earmarked as a player ever since we first saw him at St George’s Park.’

Mount had excelled in training this week and the hopes were he would provide a flair and fantasy to this team; he has overtaken Ross Barkley at Stamford Bridge and has now done likewise with England. In Southgate’s eyes, he is ahead of James Maddison, too.

This, then, seemed the perfect opportunity to blood him. Qualification for major tournaments does not have the risks of days gone by and, as a result, managers have the scope to mix and match without long-term ramifications.

It is a new phenomenon – and not necessarily a good one. It did not go unnoticed, for instance, that this fixture took place 22 years to the day when England quarried into their reserves of willpower and grit to reach the 1998 World Cup when holding Italy to a 0-0 draw in Rome.

Mount’s inclusion made sense on so many levels. He has overtaken Ross Barkley at Stamford Bridge and has now, seemingly, done the same with England; James Maddison is having a fine campaign with Leicester but he is behind Mount in the pecking order and wouldn’t have started here, either.

We can say with confidence, too, he is currently ahead of Dele Alli, whose fitness is holding him back, and Jesse Lingard too. There is, without question, an opportunity for Mount to make the position his own going into the European Championships.

Nerves could have been an issue but it was clear when you watched him go through his early paces that Mount was ready. He was buoyant in the warm-up, excelling in the shooting drill when he swept drives with both feet into the top corner past Jordan Pickford.

Once the action got underway, he was similarly to the fore. England’s first attack, in the fourth minute, began with his cushioned pass into the path of Harry Kane and the move ended up with Raheem Sterling having his legs swept from underneath him. Kane, of course, rattled in the penalty.

Frustratingly, though, the shape of the game altered when England so needlessly and cheaply conceded a 10th minute equaliser. There play was scruffy and it hindered Mount, who had support in the stadium from Chelsea Technical advisor Petr Cech.

Club boss Frank Lampard, meanwhile, watched events unfold over a pint in a Battersea pub with Prince William to promote the ‘Heads Up’ Mental Campaign. He would have seen that circumstances did not help his young protégé.

Mount, at times, seemed unsure of whether he was playing as a No 10 or required to slot back into a more deeper role alongside Declan Rice and Jordan Henderson, as the Czech Republic tried to inflict England’s first defeat in a qualifier since November 2009. They would ultimately succeed.

One thing that was never in question, though, was his attitude and desire. Those four words – do the hard work – came naturally and there was one fine snapshot in the 28th minute when he pressed a red jersey all the way to the Czech byline and forced a throw-in.

If it was not going to be easy to illuminate the final third, Mount was never going to have his work rate called into question. It would be easy for young player to lose heart when they are so desperate to make an impact but, right until the end, he was running hard.

Understandably, Mount looked dejected when Southgate switched him for Barkley in the 73rd minute, the manager’s high five and pat on the back proved no kind of consolation. One thing is certain, however, and that is the fact he needs another opportunity in the role.

A bad night for England, without question, but it not one that should force Southgate to make kneejerk decisions. Mount has the ability to play regularly for England. He deserves a second chance to show there is more to him than just hard work.

Certain England managers in the past who abandoned such an experiment on one showing but Southgate has substance. He knows what areas needs to be improved – an essay could be written on the defence – but he also has perspective. One tough night will not count against Mount.

Tottenham defender Kyle Walker-Peters 'on the verge of making the move...