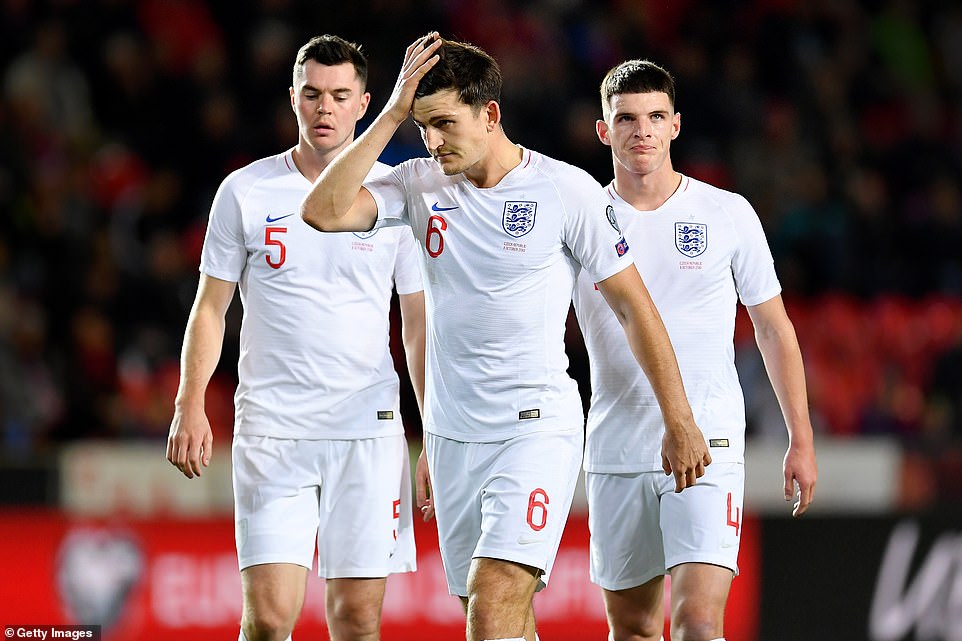 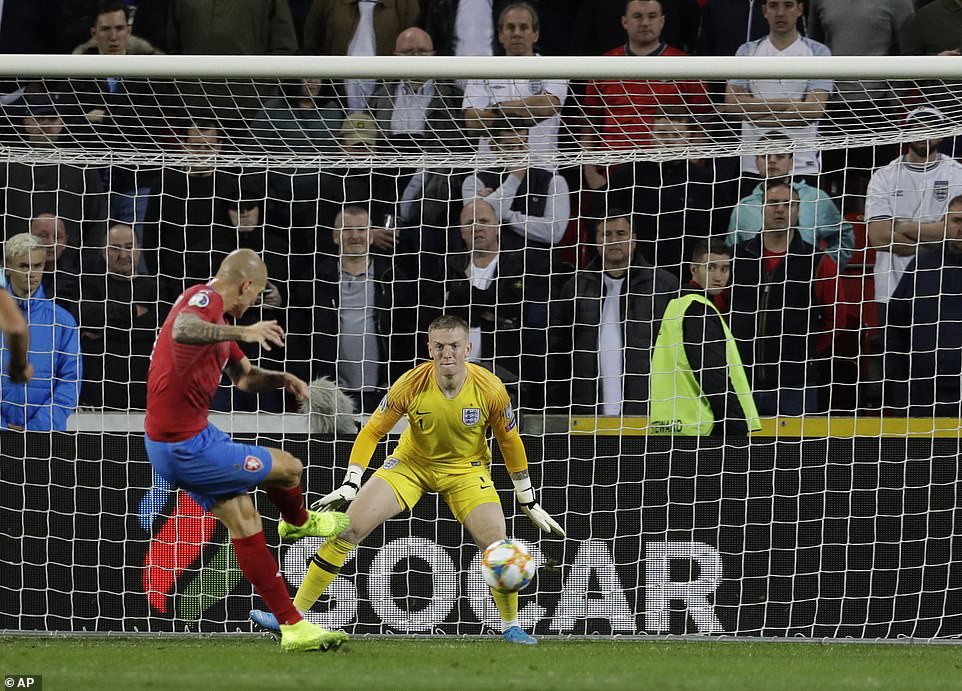 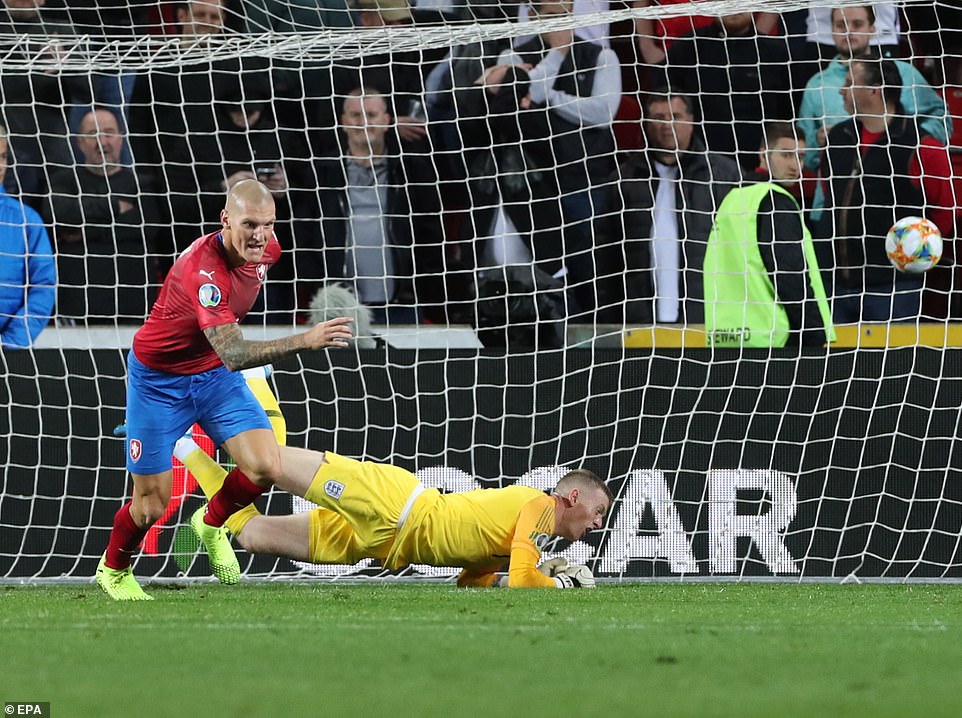 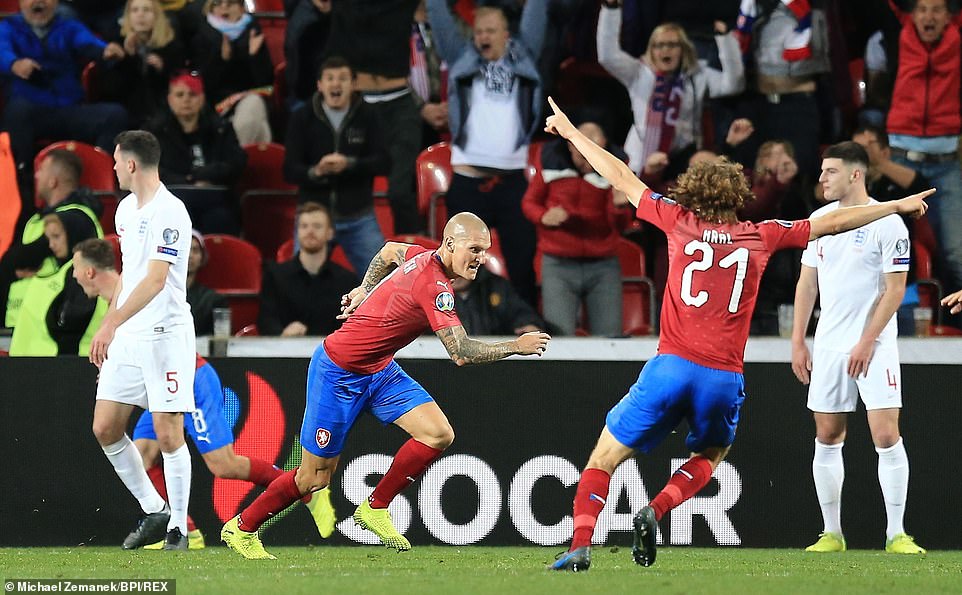 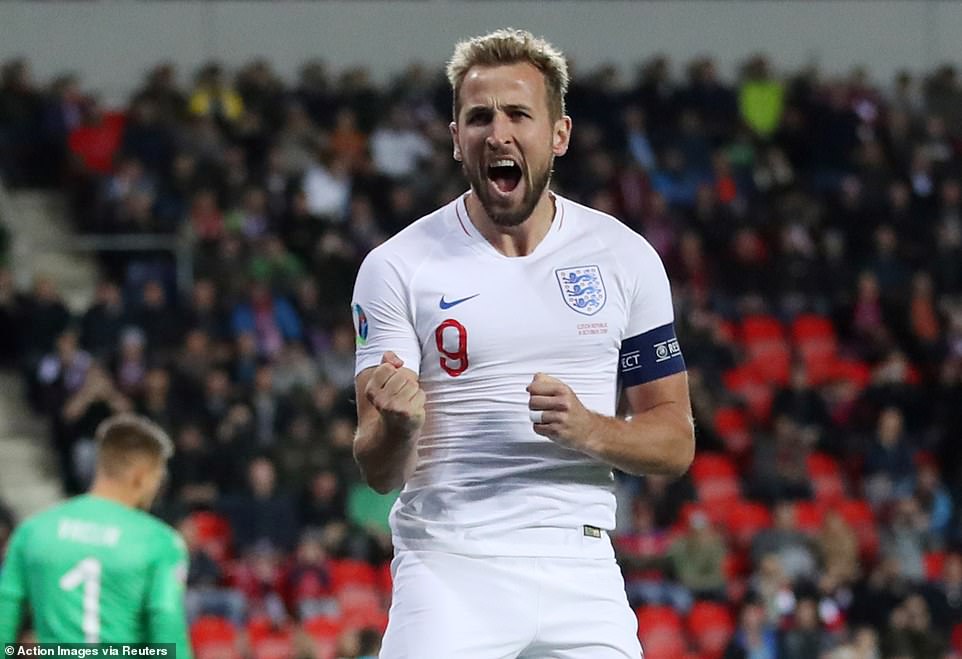 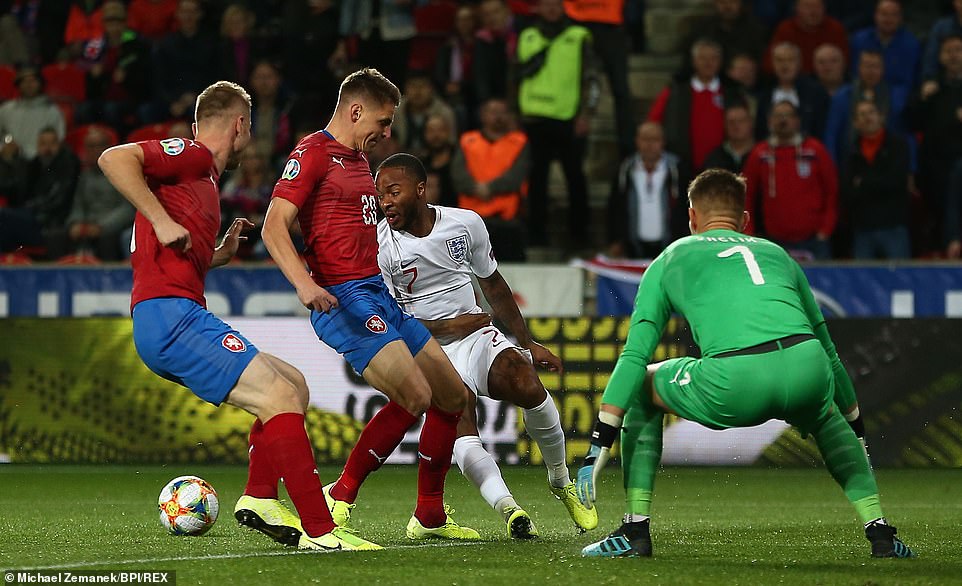 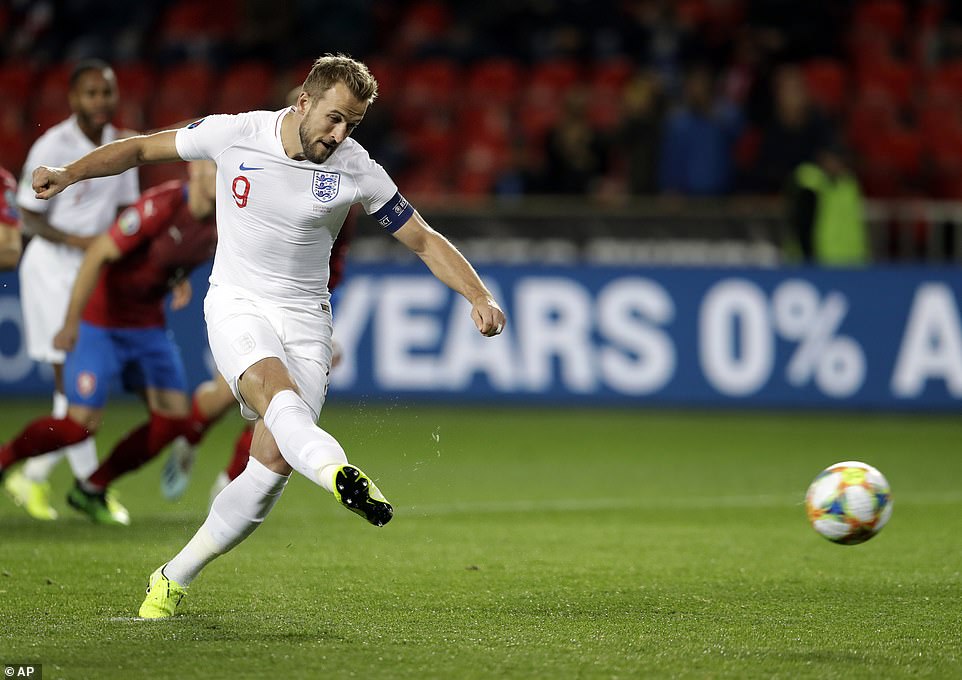 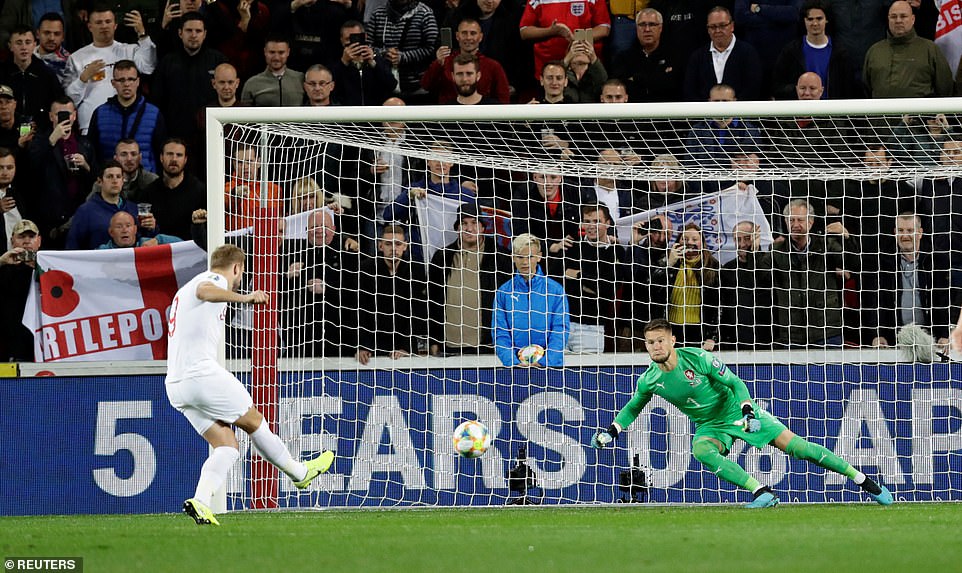 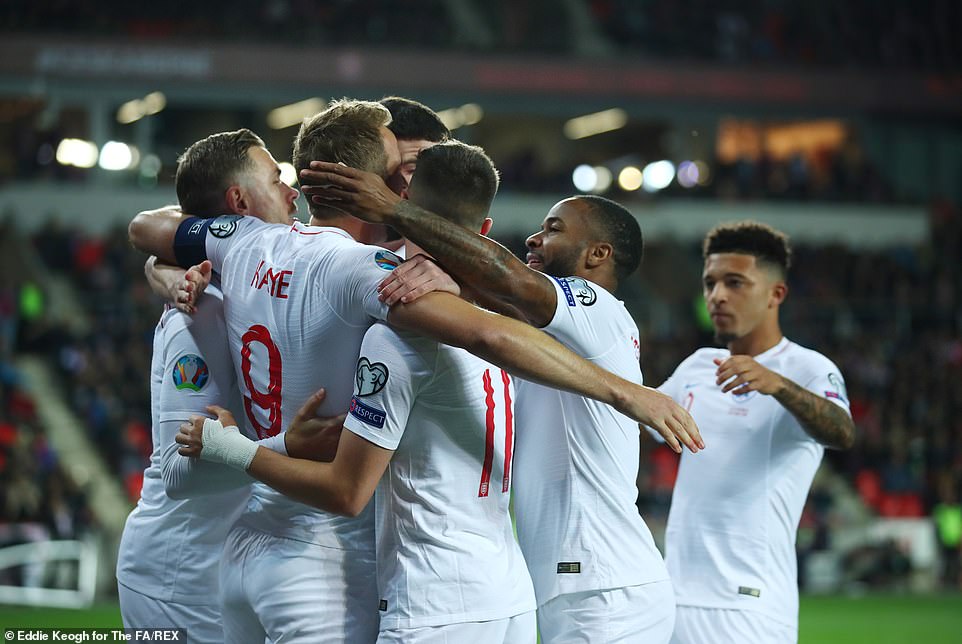 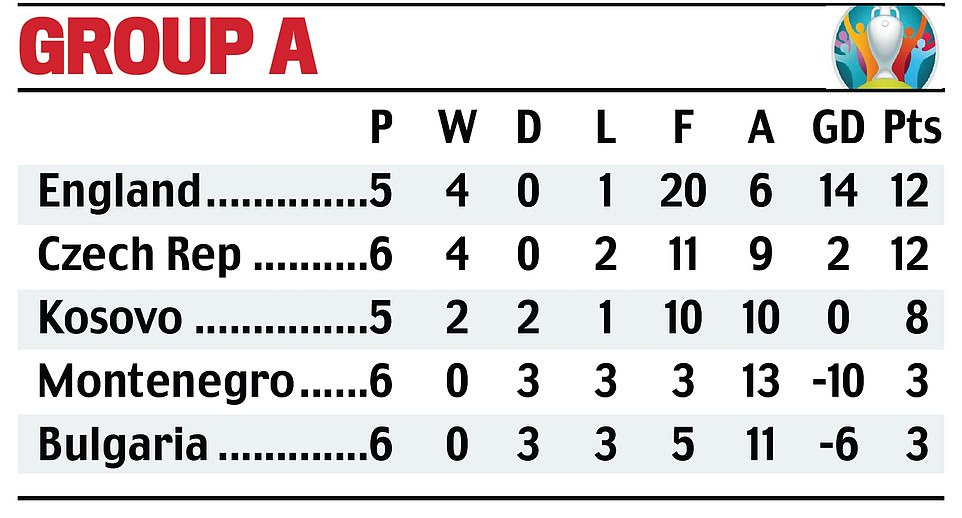 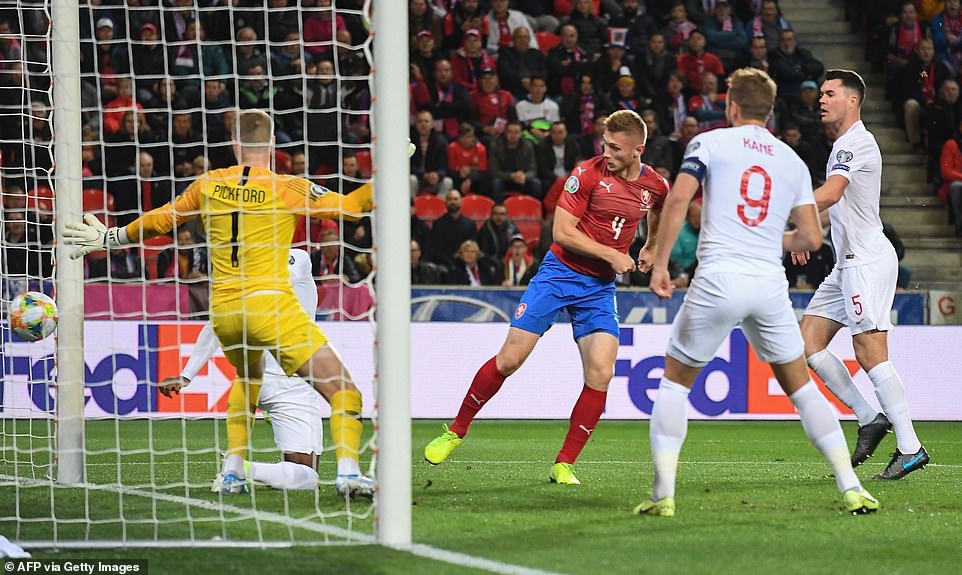 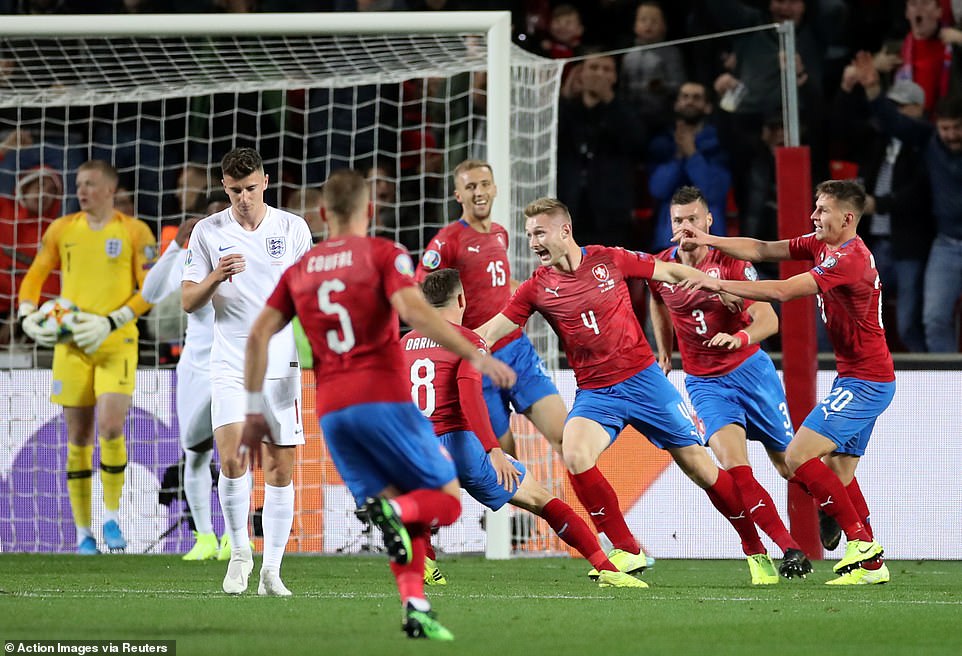 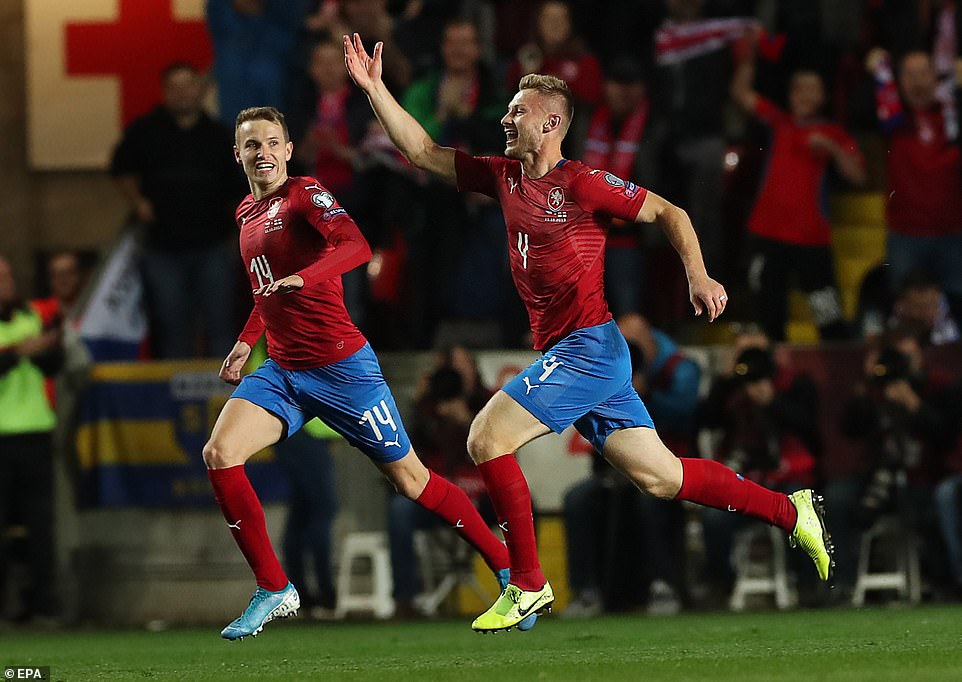 This was a throwback performance from England and not in a good way. Too slow, too predictable and too easy to play against, qualification for next summer’s European Championships will have to wait.

If England are to prosper in a tournament they will play largely at Wembley, they will have to be a lot better than this. Home advantage will not get Gareth Southgate’s team very far if they play so meekly.

Second best to a very modest Czech Republic team, a good side would have buried them. As it was England lost by a single goal and an unbeaten record in qualifying games going back 43 games and 10 years was gone.

Given what has gone before in Group A and for much of Southgate’s tenure, we can forgive England a performance out of character in so many ways. If they beat Bulgaria on Monday we will see this as a blip.

Nevertheless, this was poor and should be viewed as a timely warning. Southgate had been asked on Thursday if his team would do a lap of honour if they secured qualification here. Maybe there is more to do than we – and indeed he – thought.

Before this game, we knew there were issues across the back four and they showed themselves again. Neither of the two Czech goals that followed Harry Kane’s early penalty reflected well on the England defence or indeed the midfield players detailed to protect them.

What we didn’t expect was that England should be so poor in possession. Under Southgate, this is an old habit they had finally shed, morphing England in to a dynamic attacking team, one that plays quickly and urgently.

Here they were so far removed from this that exciting players like debutant Mason Mount and Jadon Sancho barely saw the ball. Mount’s night lasted 70 minutes and he will probably admit that the whole thing passed him by.

At no stage were England in charge of the game and that was unusual given that they had scored so freely thus far in the group.

Even when Kane scored his penalty in the fifth minute, it was on the back of a breakaway. The Czechs almost fashioned a chance in the opening moments and that was an indication of what was to follow.

However when Kane did score his 27th international goal following Lukas Masopust’s anxious foul on Raheem Sterling, it did seem as though England would ease through another game entirely on their own terms.

England had beaten the Czechs 5-0 at Wembley in March and maybe it was a sense of inevitability that caused Kane to celebrate his goal with such a gentle and reserved pump of his right fist.

This, after all, is what England do these days against average teams. They put the foot on the throat and don’t take it off until all life is gone. Not here. No, here they continued where they had left off in that harum-scarum 5-3 win over Kososvo in Southampton last month.

Once again, England proved incapable of dictating how a game was played and in which areas. It is this, as much as the defeat, that should concern Southgate. Really good teams play big games on their own terms. International football is about control and here England never really had it.

The Czechs responded well to Kane’s goal and were level immediately. Jordan Pickford saved well from Vladimir Coufal’s cross-shot but was helpless when the resulting corner was allowed to pass right across goal where Jakub Brabec turned the ball in at the far post.

A shoddy goal to concede, it felt like a wake-up call, a reminder to England that there was another team on the field. It turned out to be much more than that. It was a pointer to the way the night would go, England never sure of themselves against a team prepared to play their football cleverly in the spaces between the visiting holding pair of Jordan Henderson and Declan Rice and the defence.

England did not shoot on goal again until the second half. The Czechs threatened regularly as Pickford saved from marauding left-back Jan Boril and striker Patrick Schick, that one a header from a free-kick.

Southgate has problems with the Pickford/Maguire/Keane axis but here his whole team failed him. From front to back they were never sure-footed and the only real surprise what was that the Czechs took so long to claim what was rightfully theirs.

Southgate is not a passive coach and he tweaked his system to 4-3-3 at half-time. Credit to him, it did bring about some improvement. England saw more of the ball and Sterling may have scored when Kane played him through had goalkeeper Tomas Vacluick not palmed the ball clear as he dashed from goal.

Still, though, the Czech Republic enjoyed the better chances. Pickford saved spectacularly from Masopurst and at his near post from Alex Kral, the latter feeling as though it had probably secured England a point.

But with five minutes left, England got themselves in a mess in their own half and when Danny Rose lost the ball under pressure the Czechs swept down the right and crossed for 30-year-old substitute Zdenek Ondrasek to score from 10 yards on his international debut.

For the home team’s hopes of qualifying, this was a significant result. It should not prove to be so for England. Southgate and his players have credit and points in the bank. This should hurt them, though, because it was a performance every bit as limp and undeserving as it looks, feels and sounds.