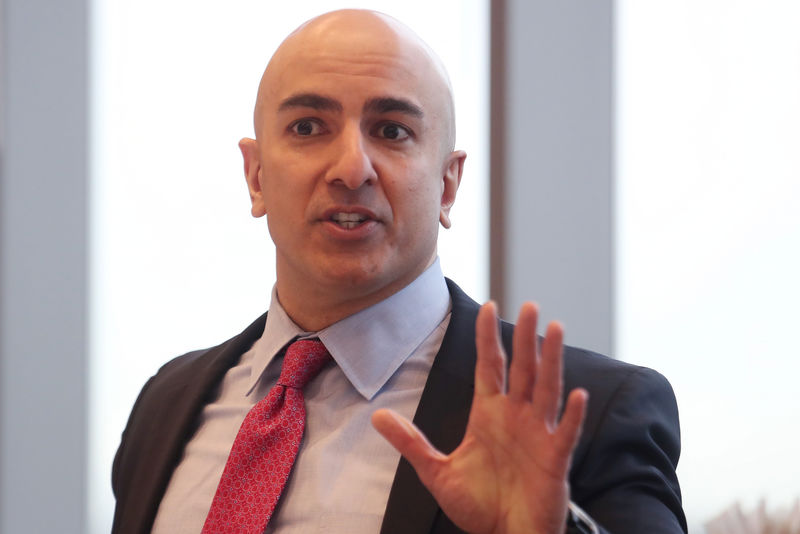 © Reuters. President of the Federal Reserve Bank on Minneapolis Neel Kashkari speaks during an interview in New York

(Reuters) – Minneapolis Federal Reserve Bank President Neel Kashkari on Friday said the U.S. central bank should look into controlling the yield curve as a potential tool for monetary policy, similar to an approach used by the Bank of Japan.

“It’s worth analyzing the potential of yield curve control as yet another policy tool,” Kashkari said in New York during an event at the Council on Foreign Relations.

He said the U.S. central bank may not want to target yields on 10-year notes the way the Bank of Japan does. “Even if we tried to control the first couple of years of the yield curve that could be another tool in the Fed’s arsenal,” Kashkari said. “It’s complicated, it’s not without risk but I think it’s interesting and worth studying.”

Kashkari was not as open to the idea of negative interest rates, another monetary policy tool used by the Bank of Japan. He said the Fed would turn to rate cuts and quantitative easing to stimulate the economy before it turned to negative rates.

Kashkari repeated his views that U.S. interest rates should be lower to bolster the economy and help bring more people into the labor market and lift wages. He said he would support higher interest rates if wage growth accelerated to 3.5% or 4.0%, a level he believes could lead to higher inflation.

Fed officials are divided on whether the U.S. central bank should continue to reduce rates. The September rate cut, which brought the benchmark overnight lending rate to a range of 1.75% to 2.00% was passed with a 7-3 vote.

Investors widely expect the Fed to cut interest rates again when it meets on Oct. 29-30. Kashkari said that he would probably support another rate cut in October but that any further reductions should be based on economic data and developments in the trade war with China.

He does not vote on policy this year, but he will become a voting member next year.

When asked about comments from President Donald Trump criticizing the Fed and calling Powell an “enemy,” Kashkari said that policymakers leave “politics at the door” when they come to work.

“The louder the noise gets, the harder the rhetoric, the more all of us hug data,” he said. “We hug analysis, and it’s our true north.”