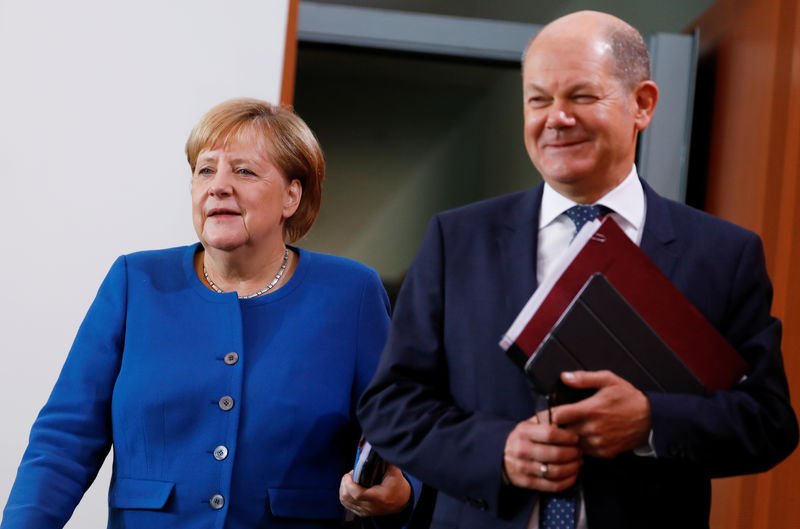 By Andreas Rinke and Holger Hansen

BERLIN (Reuters) – German Chancellor Angela Merkel’s conservatives and the center-left Social Democrats (SPD) on Sunday broke a deadlock over a higher basic pension for low-income workers, an impasse which had threatened the future of their governing coalition.

Senior coalition members, including Merkel and SPD Finance Minister Olaf Scholz, sealed the compromise deal during talks in the chancellery that lasted more than six hours.

The package also includes lower contributions to the public unemployment insurance scheme and the creation of an investment fund to support local high-tech start-ups.

“Germany will get a (higher) basic pension and this is a socio-political milestone,” said SPD interim leader Malu Dreyer, whose party had been pushing for a better deal for lower-income workers.

The coalition between Merkel’s CDU/CSU bloc and the SPD has struggled to stay afloat for much of the time since it was formed in March 2018 to end months of political limbo following an inconclusive national election.

The conservatives had agreed to an SPD proposal to introduce a higher basic pension for low-income workers who had been employed for at least 35 years. But some details were left open and talks on finalizing terms had stalled for months.

The impasse led some SPD members, worried by the party’s falling ratings, to threaten to quit the coalition.

If the partners had failed to reach a deal, SPD members might have decided to vote against staying in the coalition at a party congress on Dec. 6-8.

Dreyer estimated that up to 1.5 million people would benefit from the deal through increased pension entitlements.

“Especially women will benefit from this… so this is also a strong signal when it comes to feminist policies,” she added.

Annegret Kramp-Karrenbauer, chairwoman of Merkel’s Christian Democratic Union (CDU), said the agreement would reduce the risk of old-age poverty while the decision to lower contributions to the public unemployment insurance scheme was meant to give the slowing economy a fiscal stimulus.

The planned investment fund will be worth up to 10 billion euros to support cutting-edge technologies in areas such as digitization and climate protection, Kramp-Karrenbauer added. It will be run by the state-owned KfW bank.

Markus Soeder, leader of the Christian Social Union (CSU), the Bavarian allies of the CDU, said the coalition parties had shown with their compromise deal that they were able to deliver.

He estimated that the increased basic pension would involve additional costs of up to 1.5 billion euros ($1.65 billion).

The package is likely to be welcomed internationally after the European Commission and the International Monetary Fund have urged Germany for years to use its hefty budget surpluses to stimulate domestic demand through higher wages and pensions.

The German economy shrank by 0.1% in the second quarter on weak exports, and data due on Thursday is expected to show another contraction in the third quarter. This would mean that Europe’s largest economy had entered a technical recession.

Manchester United 'eye up move to bring Idrissa Gueye back to...