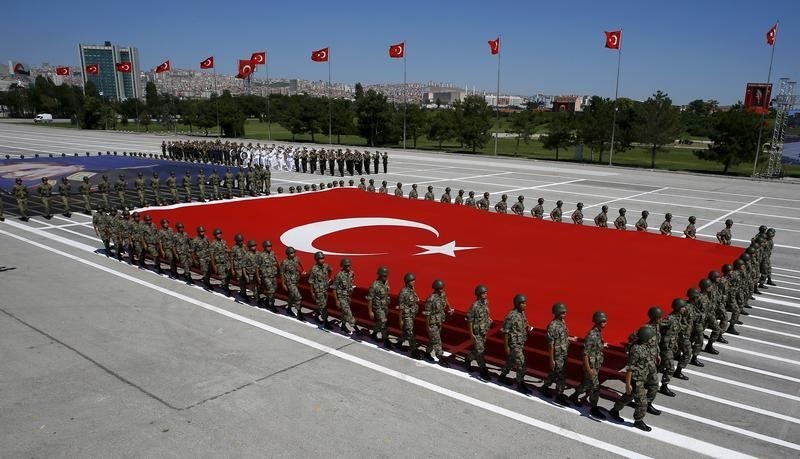 Investing.com — Gold prices rose on Wednesday as Turkey launched an invasion of northern Syria in pursuit of Kurdish militias that it suspects of helping separatists within Turkey.

The operation began with massed air raids, including against civilian targets, according to a spokesman of the Kurdish-led Syrian Defense Force, quoted by MCNBC.

The news kept haven assets bid even though risk assets such as stocks and commodities ticked up on a fresh bout of optimism for at least a partial and temporary détente between the U.S. and China when the two resume trade talks on Thursday.

Other haven assets also rose: Silver futures hit their highest in over a week before retracing slightly to stand at $17.81 an ounce, while platinum futures rose 0.3% to $892.60 an ounce.

Prices also enjoyed continued support from hopes for further interest rate cuts by the Federal Reserve after Fed Chairman Jerome Powell hinted at the possibility of further action before the year end in a speech on Tuesday.

The Fed publishes the minutes of its latest policy meeting at 2:00 PM ET (18:00 GMT), something that may show how realistic hopes of another 25-basis-point cut at this month’s meeting are. According to Investing.com’s Fed Rate Monitor Tool, investors see an 84% chance of action on Oct. 30.

How much further that can lift gold prices is still questioned by analysts, who point to portfolio holdings of gold that are already at record highs.

Ulrich Stephan, a strategist with Deutsche Bank (DE:DBKGn), suggested in a morning note that current positioning leaves silver better placed to outperform in the near term, especially if eurozone governments can bolster growth with more expansive fiscal policy. Around a half of global silver demand is industrial.

For the moment, though, there’s little sign of any turnaround in industrial demand for metals. Copper Futures continued to languish at $2.57 a pound, close to the three-year low they hit in August.

U.K. Economy Is Picking Up After Brexit

Watch live: Trump rallies his base in Las Vegas