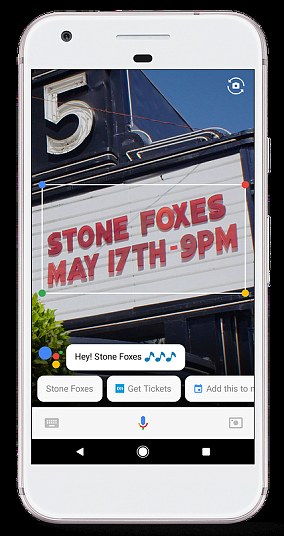 Google Lens uses the firm’s AI to process images, and can do everything from reading a sign, translating a menu in a foreign language, and buy tickets for an event advertised on a billboard

A powerful AI-powered interpreter made by Google is available on mobile devices today for the first time.

Google Interpreter will be available on any mobile device capable of running Google Assistant and is activated by users summoning the assistant with their voice.

For instance, the translator can be activated by saying ‘Hey Google, help me translate Spanish’ or another similar command.

‘Whether you’re heading on a trip this holiday season, gearing up for international travel in the New Year, or simply want to communicate with family members who speak another language, interpreter mode is here to remove language barriers no matter where you are,’ writes Google in a blog post.

The tool is capable of translating 44 languages and works in real-time by listening to the speech, transcribing it and then speaking it aloud.

It allows two-way conversation because it translates the user’s language and the language of whoever they are talking to.

While Interpreter has been available on other Google devices like its smart speaker, the Home, this is the first time that people will be able to employ the tool on their mobile device.

Google has also long offered a powerful translating tool via its Lens app that is capable of translating text using a device’s camera.

AI and computer vision are capable of ‘looking’ at text placed in front of one’s camera and then spitting the text back out in another language.

Like Interpreter, the Lens tool has become a favorite for travelers who struggled to get by in foreign countries where they don’t speak the language.

Google Lens uses the built-in camera on a smartphone to scan and identify real-world objects.

It’s like a Google search, but for the objects in the world around you.

The Californian company’s AI can recognise species of dog, translate menus in a foreign language, and save phone numbers listed on a physical business card.

Google Lens also allows users to point their phone at a sign for a concert and automatically add that event to their online calendar, or even purchase tickets right then and there.

The software is able to recognise plants and even log into a new Wi-Fi network simply by pointing the phone at the password.

Google Lens also lets smartphone owners copy-and-paste text from the real-world into their handset, allowing them to quickly grab a recipe from a book, or a gift card code.

Another tool called Style Match lets users hold their camera up to store mannequin or clothing item and Google will surface options for similar items to buy online.

‘With Google Lens, your smartphone camera won’t just see what you see, but will also understand what you see to help you take action,’ Google clams.

So far, Google Lens has been included in the native camera app of a number of smartphones, including the Google Pixel and the Pixel 2, Sony Xperia XZ2 and XZ2 Compact, OnePlus 3 and OnePlus 5.

Smartphone manufacturers including LG, Motorola, Xiaomi, Nokia, TCL, and Asus have pledged to integrated Google Lens into their camera apps in future, although they have so far stayed tight-lipped about when the update will materialise.

Until then, Google has launched a standalone app in the Play Store, which enables anyone with an Android smartphone access to the features.

Google Lens is free to download and will run on any smartphone running Android 6.0 Marshmallow or newer.

The standalone app has exactly the same functionality as those phones which have Google Lens built directly into the operating system.

Stocks stall and dollar squeezed as investors wait for stimulus

Thousands of patients living in the poorest areas of the UK...

The Chelsea clearout: Frank Lampard wants rid of up to SEVEN...