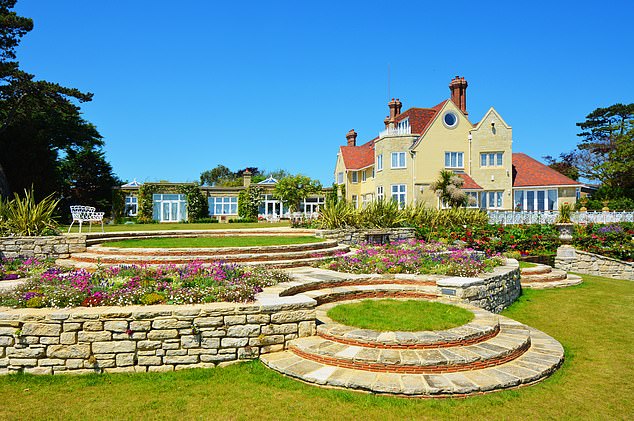 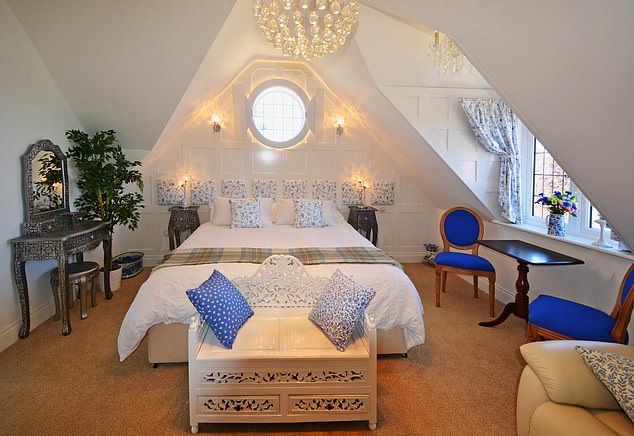 One of the hotel’s eight bedrooms. There are also six self-catering suites

Standing high on the cliffs at Shanklin in the Isle of Wight, Haven Hall is far removed from what you might expect of a seaside B&B establishment.

Behind imposing electric gates, there is a helipad amid immaculate lawns, while those arriving by more mundane methods often drive an Aston Martin or Bentley.

Outside, two acres of gardens offer fountains, a gazebo, a grass tennis court and a heated pool with lavish changing facilities.

Staying at Haven Hall is like being a guest at a private Edwardian country house.

Owners David Barratt – a scion of the Barratt building family – and wife Arielle live in a wing of the property and enthusiastically play the role of genial hosts. They renovated the house over four years and insist they like nothing more than sharing the fruits of their labours with visitors.

Celebrities such as Colin Firth, Alan Titchmarsh and footballer Peter Crouch are past guests.

Mind you, all this cosseting doesn’t come cheap, with rooms costing up to £500 a night.Breakfast beside tall French windows overlooking the gardens is a gregarious affair. Arielle supervises in the kitchen while a besuited David hosts, even pulling up a chair to advise you on outings for the day.

And there are plenty of options. Just beyond the Hall is one of the most beautiful cliff path walks on the island, dipping down to Sandown, Shanklin and Ventnor. A little further afield lies Queen Victoria’s magnificent Osborne House.

Near the Needles chalk stacks on the wilder west coast are Farringford House, former home of Victorian poet Alfred Tennyson, and nearby Dimbola House, home of pioneering photographer Julia Margaret Cameron. Both richly reward a visit. Like most B&Bs, you cannot dine at Haven Hall, which gives you the opportunity to explore the island’s options. And none could come more recommended than The Hut, at Colwell Bay. A favourite with yachties and Londoners down for the day, this beachside haven exudes a New England vibe and serves superlative seafood dishes.

The USP: You’ll feel like a favoured house guest immersed in Edwardian splendour. And there’s parking for your helicopter.

The rooms: The ‘Victoria and Albert’ is the original master bedroom and swankiest of the eight bedrooms. There are also six self-catering suites.

The food: The hot breakfast buffet is delicious, while the side dishes include lemon curd (David’s speciality) and stewed rhubarb.

Who needs to go abroad? It's not too late to book a family holiday in 'the English Alps' where youth hostels have opened their...

Exclusive for Mail on Sunday readers: Get a true taste of Crete with a MasterChef star – join Irini Tzortzoglou, last year's winner of...

Incredible images of lions by renowned photographers underscore the tragedy of their battle for survival, with the animals now extinct in 26 African countries

What a Hart-throb! Free agent Joe puts in the hard yards...

Hospitalised Covid-19 survivors make the most antibodies and donations of their...