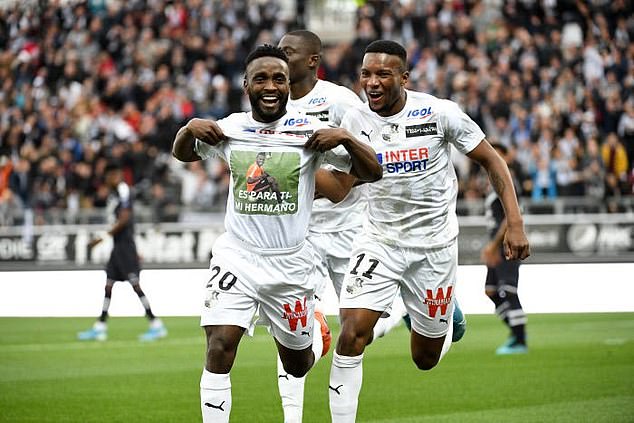 Stiven paid tribute to his brother Yeison after scoring upon his return to the Amiens team in September. Yeison was murdered in Colombia during the summer, 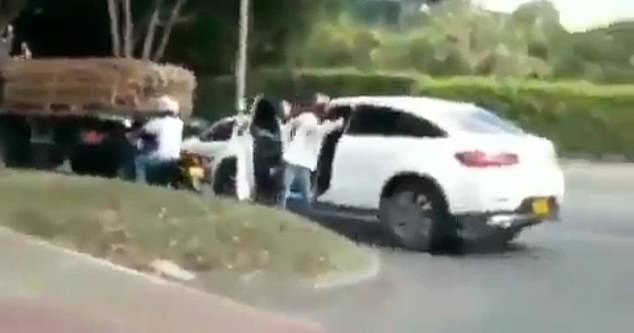 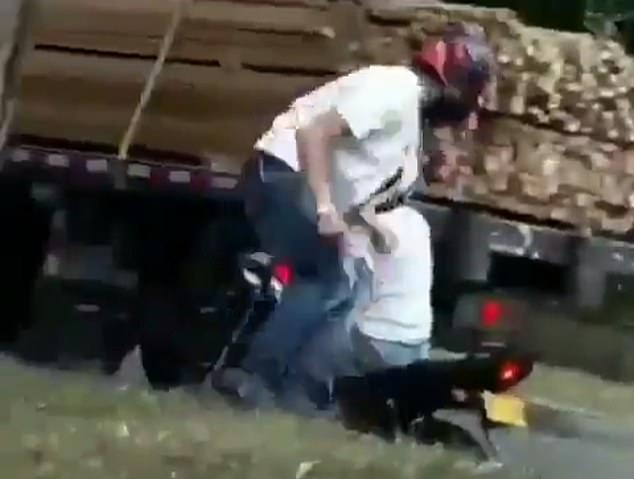 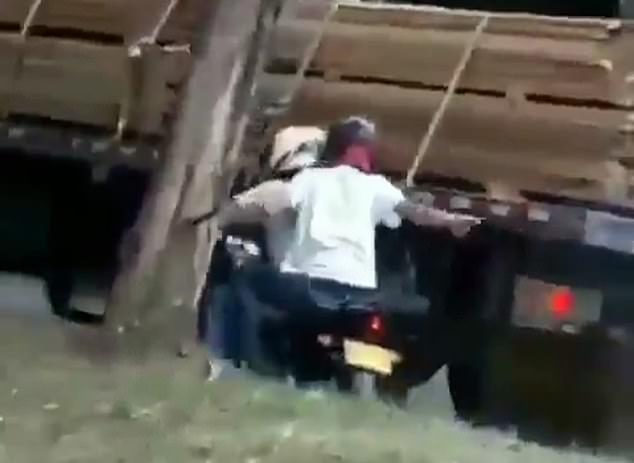 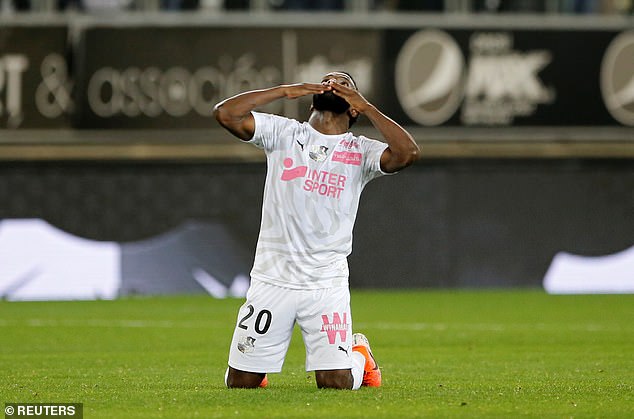 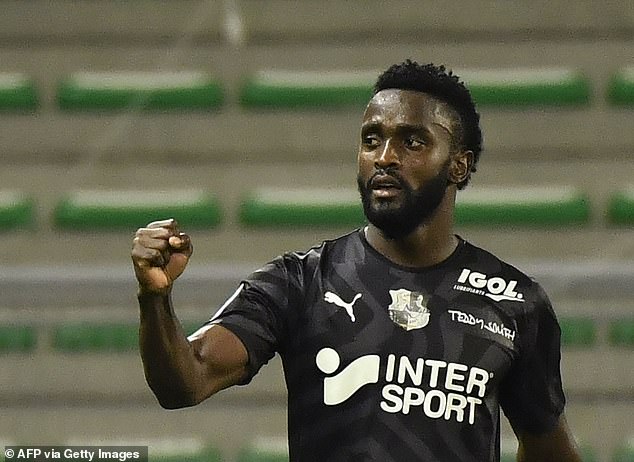 Stiven Mendoza was stuck in traffic along a typically busy street in Medellin, the second-largest city in his home country and one renowned for its bustling nature.

As the Colombian sat there waiting, a scooter straddled by two figures, identities disguised by helmets, pulled up alongside.

One of the riders opened the car door and raised his weapon at the 27-year-old Mendoza before seizing his jewellery. The assailants then sped away.

Mendoza wasn’t to know that being robbed at gunpoint wouldn’t be the darkest moment of a deeply traumatic summer for Amiens star.

He had been allowed to return to Colombia to ponder on his future and potentially secure a move away from the French top flight after failing to impress since leaving Corinthians in January 2018. Following a barren spell of just four goals in 41 appearances for Amiens, he was granted leave to reflect on a pivotal decision that held the potential to make or break his career.

But upon heading back to South America, Mendoza had been thrust head on into turmoil. The thieves reportedly escaped with two gold chains and a bracelet, rapidly transforming what was meant to be a simple trip back home into a nightmare.

The following month, things became even darker. After Mendoza had returned to training in France and watched on from the sidelines as Amiens fell to three defeats in their opening four matches, disaster struck again in horrifying fashion. Mendoza’s brother, Yeison, was gunned down inside his vehicle in Cali, Colombia, just moments after leaving his mother’s house.

(Figures taken from Ligue 1 only)

The 25-year-old, also a footballer, had been searching for a new club following a brief stay with Valledupar. But on the night of September 5, Yeison’s killer was caught in footage from a security camera dismounting a motorcycle before firing 11 cold-blooded shots, three of which hit Yeison.

Tragedy had once again struck the Mendoza family to its very core. Stiven’s future was once more thrown into doubt.

He decided to stay with Amiens despite offers having reportedly been accepted from Russian outfit Krasnodar and unnamed clubs in Spain and the Gulf.

Speaking in September, manager Luka Elsner said: ‘Steven has exceptional mental strength. The tragic events have made him mature.’

Short of options up front Elsner had recalled Mendoza to the starting line-up for a clash against Bordeaux on September 25 for what would be his first appearance of the campaign. Having fought majestically against the darkness that had enshrouded him during the off-season, he re-announced himself in spectacular fashion.

Just 106 seconds passed of his season’s bow before he netted. The finish was delightfully simple, a close-range tap-in just a matter of inches from the goal line. The rush of emotion outpouring from the Colombian was evident, and amid a whirlwind of ecstasy and mourning Mendoza lifted his jersey to reveal a touching tribute to his late brother.

With his recovery from the doldrums of despair came glowing praise from Elsner, who said: ‘Despite everything he’s gone through in recent months, his qualities have never been in question.’

Elsner himself is a young coach with a point to prove and Mendoza’s heroics have helped bridge the initial divide between the two figures.

The star’s personality has noticeably changed, and his formidable form in front of goal is a complete contrast to his former self, who was accused of a lack of effort and an attempted transfer request.

That criticism was a far cry from Nicolas Anelka’s prediction four years ago when managing and playing in India for Mumbai City while Mendoza had a stint with Chennai.

‘He is speedy and knows where the goal is. I would like to see him succeed in Europe,’ said the well-travelled Anelka.

The complete list of clubs Mendoza has represented, while not quite as long as Anelka’s, reads Envigado, America Cali, Cucuta Deportivo, Deportivo Cali, Chennai, Corinthians, New York City, Bahia and stops, for now, at Amiens.

The success Anelka wished for him finally appears to be coming.

Any talk of questionable commitment from Mendoza was banished four days after his maiden strike of the season, with a smart finish from a cutback against Angers. With the net still rippling, Mendoza collapsed to his knees and signalled towards the heavens.

In the clash with Marseille just a week later, the striker was slotted through on goal and kept his composure to seal victory. The heights of emotion had been scaled once again, and a touching outpouring of support from the Amiens entourage soon followed.

Gone are the days of shifting aimlessly from club to club in desperate search of a long-term home, and his attempts to force through a move in the summer are forgotten.

And there has been a further silver lining, too. His performances have caught the attention of Colombia national team coach Carlos Queiroz, who included Mendoza in his squad for upcoming fixtures against Ecuador and Peru.

Recognition on the biggest stage of them all underlines his remarkable turnaround.

The international hopeful embodies the hope and wealth of opportunities that football can provide. From the very depths of darkness Mendoza has, piece by piece, reestablished himself as a standout performer in one of Europe’s elite leagues. And along the way he has demonstrated time and time again that there is always light at the end of the tunnel, regardless of how faint it may seem.

Freezing embryos after IVF does NOT boost the chances of becoming...

Hospitalised Covid-19 survivors make the most antibodies and donations of their...

Hydroxychloroquine could still save tens of thousands of lives from Covid-19...