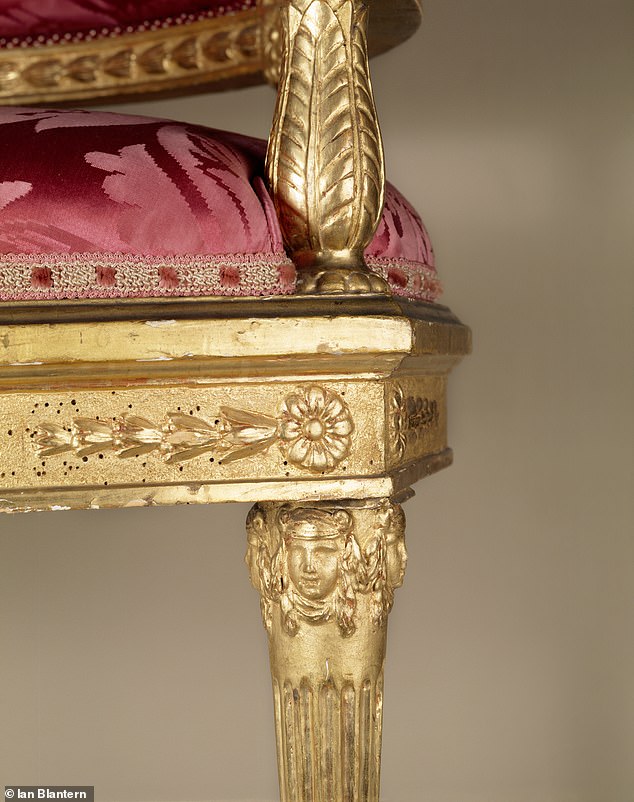 Some treasures have already been ruined by pests, including this gilded armchair from 18th century Rome at the Italian-style palace Ickworth House in Suffolk 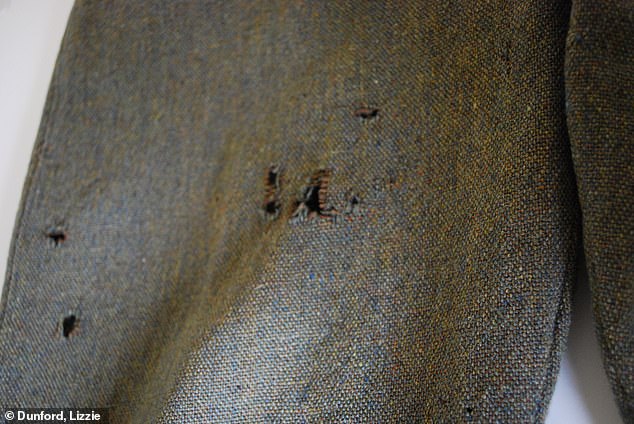 Silverfish and webbing clothes moths are the most problematic, the National Trust reveals. Pictured, green tweed knickerbockers with holes in from moth damage 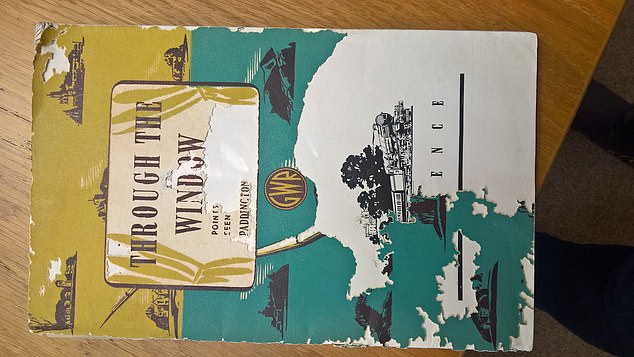 Pictured, Silverfish damage to a book cover. Silverfish are attracted to the sugars found in paper, the glues used in book bindings and the paste used to hang wallpaper 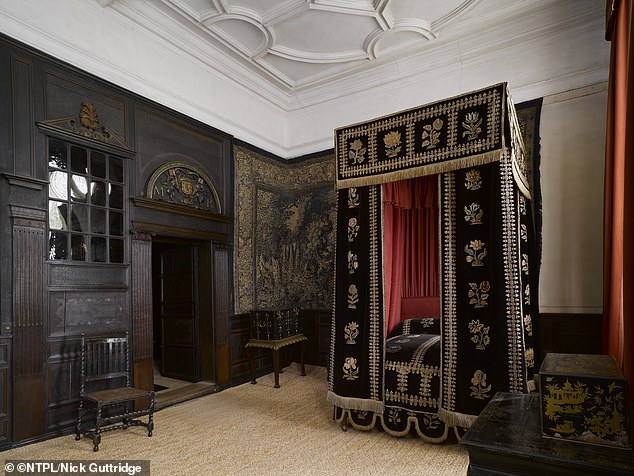 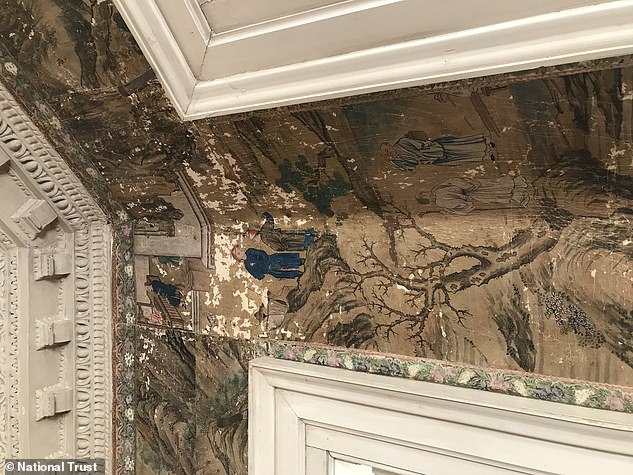 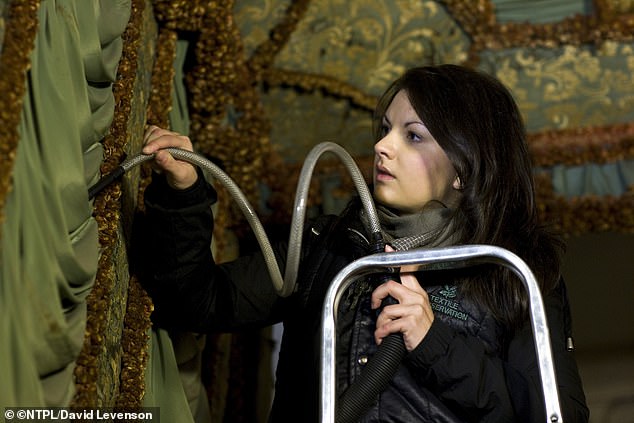 Conservator using small vacuum cleaner to remove dust from the headcloth of the King James II bed prior to removal, at Knole, Kent. The bedroom suite was ordered in 1688 is in urgent need of conservation to prevent further degradation 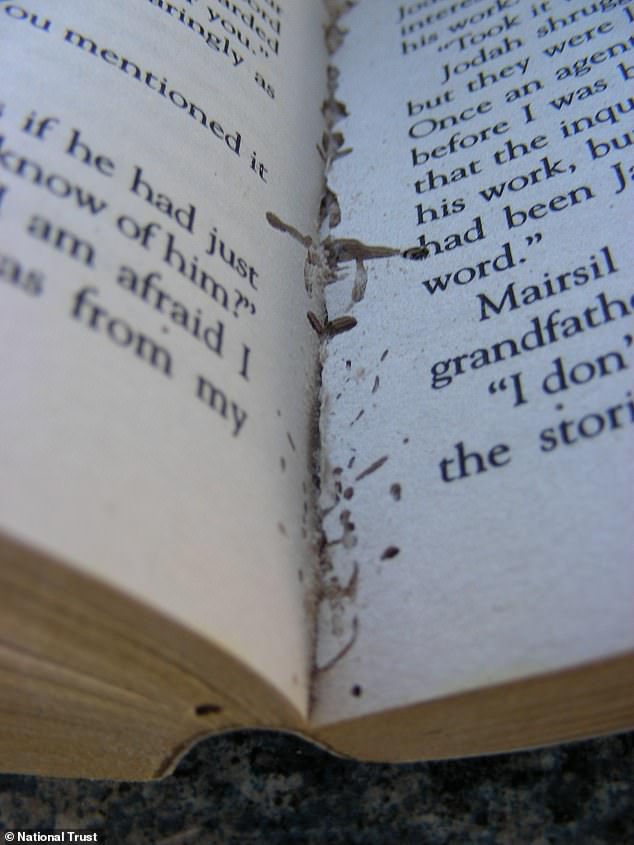 Pictured: furniture beetle damage to book. The National Trust has released, for the first time, which pests are most troublesome to its restoration efforts 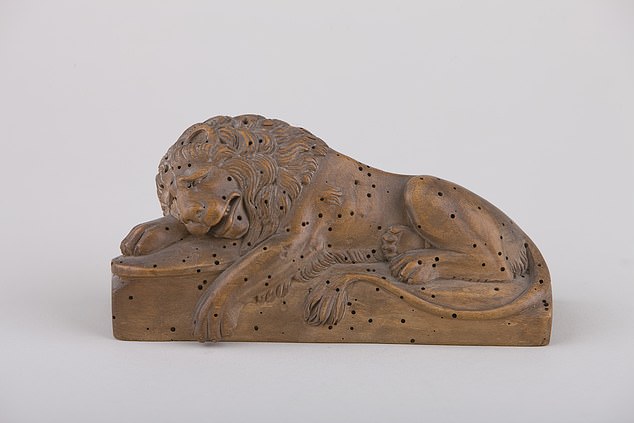 Furniture beetle larvae have also eaten into the Sleeping Lion made by the Danish artist Bertel Thorvaldson, who is more famous for his sculpture of Jason with the Golden Fleece (pictured)

The nation’s historic houses and their treasures are under siege from an army of insects, says the National Trust.

The charity has released, for the first time, which pests are most troublesome to its restoration efforts, amid fears warm winter will increase their numbers

Some treasures have already been ruined by pests, including a gilded armchair from 18th century Rome.

Located at the Italian-style palace Ickworth House in Suffolk, its legs are now peppered with holes from the so-called ‘woolly bears’.

Meanwhile insects called silverfish have eaten away part of the beautiful and extremely rare Chinese wallpaper at Saltram in Devon.

Silverfish have also forced staff at Hardwick Hall in Derbyshire, where the 2018 film Mary Queen of Scots was filmed, take special measures to protect the rush matting.

A carpet beetle infestation has seen curtains hand-designed by the artist Rex Whistler temporarily removed from Mottisfont Abbey in Hampshire.

Clothes moths have also munched away at tweed knickerbockers worn by playwright George Bernard Shaw and displayed at Shaw’s Corner, his country home in Hertfordshire.

Nigel Blades, the Trust’s preventive conservation adviser responsible for interior environmental conditions, said: ‘Insect damage to objects is not new – we know, for instance, that textiles and foodstuffs from as far back as ancient Egypt suffered from insect infestations.

‘Fortunately only a tiny proportion of insect species in the UK attack or eat historic material. However a small percentage of these have the potential to become serious pests and can cause irreversible damage to collections in a short period of time.’

Silverfish are attracted to the sugars found in paper, the glues used in book bindings and the paste used to hang wallpaper.

The wingless silvery-blue insects have caused significant damage to one of only a few remaining examples of the early history of Chinese wallpaper, thought to have been at the Georgian mansion Saltram since around 1750.

In the Chinese bedroom of the house, the insects’ larvae have munched away at the intricate wallpaper design, made by printing black and white scenes and then painted by hand.

At Mottisfont, ‘woolly bears’ invaded the lining of the curtains of the Whistler Room, which the great artist hand-painted to look like ermine. The drapes had to be removed and frozen to kill the beetles, larvae and eggs, and the lining will now be remade.

Furniture beetle larvae have also eaten into the Sleeping Lion made by the Danish artist Bertel Thorvaldson, who is more famous for his sculpture of Jason with the Golden Fleece.

The wooden lion, thought to have been created between 1821 and 1899, is kept in a store room at Springhill, a ‘Plantation’ home in County Londonderry.

National Trust staff in the Mary Queen of Scots room at Hardwick Hall – which the Queen was once said to have stayed in, but never actually did – have had to scale back their dampening of the rush matting.

While this is important to stop it drying out, it attracts silverfish.

Other pests causing problems, based on reports from 164 National Trust properties, are the Australian spider beetle and the common booklouse, which feeds on paper.

Although there has been no recent rise in pest numbers, Hilary Jarvis, assistant preventive conservator for the National Trust, said: ‘We are a little concerned about the past two warm winters, as that is the time when we rely on cold temperatures to kill some of the larvae.

‘They may also be breeding more because of the warm weather we have seen, so we will be keeping an eye on that.’

The National Trust safeguards more than a million objects in its collections, sometimes using a water-based insecticide and temperature controls to keep pests away.