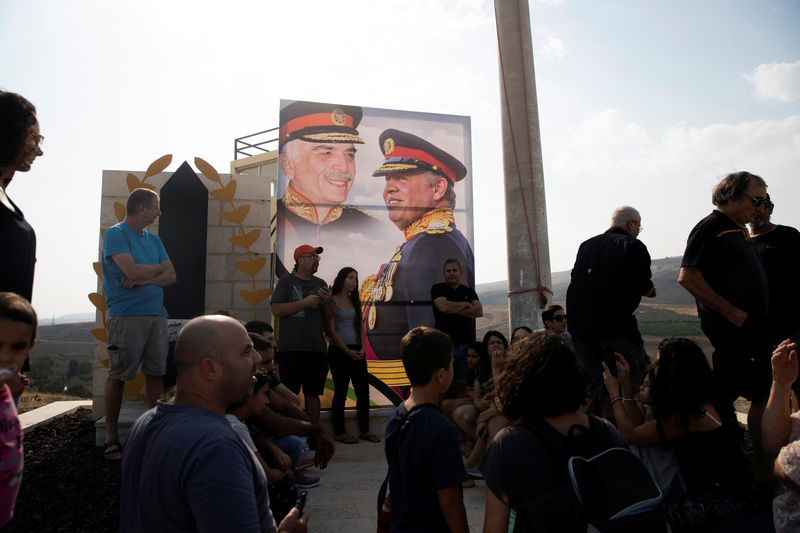 © Reuters. A picture of Jordanian King Abdullah and his father, the late King Hussein, is seen as people visit the “Island of Peace” in an area known as Naharayim in Hebrew and Baquora in Arabic, on the Jordanian side of the border with Israel

NAHARAYIM (Reuters) – It has been a bitter harvest for some Israeli farmers on the border with Jordan. On Sunday, a 25-year-old deal between the two countries that has allowed them to cultivate land there formally expires.

Under the deal, part of the 1994 Jordan-Israel peace treaty, two territories straddling the border were recognized as under Jordanian sovereignty but with special provisions allowing Israeli farmers to work the land and visitors to tour the Isle of Peace park in the area.

But in 2018, Jordan said it did not want to continue the arrangement, in what was widely seen as a sign of increasingly strained diplomatic relations.

King Abdullah formally declared on Sunday the end of the 25-year special regime, which most Jordanians saw as a humiliation that perpetuated Israeli “occupation” of Jordanian territory.

“I announce the end of the work in the special annex in the two areas Ghumar and Baqoura, in the peace treaty and impose our full sovereignty on every inch of them,” the king said in a speech marking the start of a new parliamentary session, drawing applause from parliamentarians and officials.

For the Israelis farming the land, the agreement’s expiry is a sharp blow.

“It was like a punch to the face,” said Eli Arazi, 74, a farmer whose kibbutz, or agricultural community, worked one of the land parcels that in Hebrew is called Naharayim and in Arabic, Baqoura.

Naharayim, which means “two rivers” in Hebrew, straddles the confluence of the Yarmouk and Jordan rivers. Israelis trace private ownership rights there to the 1920s, when the territory was part of British-mandated Palestine.

Arazi said his kibbutz, Ashdot Yaacov Meuhad, had been growing crops there for 70 years, including olives, bananas, avocados.

In the 1994 peace treaty, Jordanian sovereignty over the area was confirmed, while Israelis retained private land ownership and special provisions that allow free travel.

Jordan is one of only two Arab states that has a peace accord with Israel, and the neighbors have a long history of close security ties. But the treaty is unpopular in Jordan where pro-Palestinian sentiment is widespread.

The end of the land deal came at a low point in Israeli-Jordanian relations, said Israeli Agriculture Minister Uri Ariel. “We are not on a honeymoon but rather in a period of ongoing arguments,” he told Reuters.

Most recently, Amman was rattled by Israeli Prime Minister Benjamin Netanyahu’s promise during campaigning for a September election to annex the Jordan Valley.

Over the past few years, the deadlock in the Israeli-Palestinian peace process and disputes over a Jerusalem compound, sacred to both Muslims and Jews, have further weighed on diplomatic ties.

The government, Ariel said, should have taken action earlier to try to convince Jordan to extend the deal and let the farmers work the land.

Arazi is still hopeful that eventually Jordan will quietly let the farmers back.

Israeli newspaper Haaretz reported on Sunday that Amman granted his fellow farmers in Tzofar, the second land parcel further south, another six months of access to the land. Jordanian and Israeli officials did not respond to request for comment.