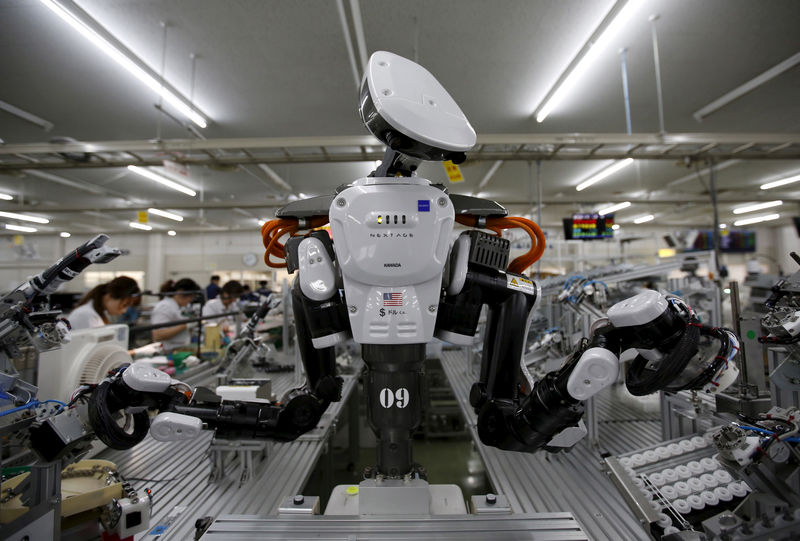 © Reuters. FILE PHOTO: A humanoid robot works side by side with employees in the assembly line at a factory of Glory Ltd., a manufacturer of automatic change dispensers, in Kazo, north of Tokyo

TOKYO (Reuters) – Most Japanese companies have put capital investment plans on hold as a result of the U.S.-China trade war and other global risks, a Reuters survey found, in a potential blow for Prime Minister Shinzo Abe’s economic agenda.

Delaying improvements in factories, equipment and technology could be a precursor to cutting investments altogether at a time when profits appear to be leveling off and the outlook for consumption – the bulk of economic activity – is dimming.

One firm in five has already cut its initial spending plans at home and overseas for the business year to March, the Reuters Corporate Survey found, while two-thirds say they’re sticking to their plans.

Business investment accounts for almost one-fifth of activity in the world’s third-biggest economy and has been one of its few bright spots. Driving spending are companies’ moves to refurbish old equipment and pour money into automation, high-tech and labor-saving technology to cope with a shortage of workers in a fast-ageing society.

The findings pose a challenge to Abe’s key economic reforms, known as “Abenomics”, which has sought to generate sustainable growth through private-sector demand and investment.

“As the Sino-U.S. relationship deteriorates, we need to wait and see how production shifts away from China to Vietnam and Thailand,” a manager at a metal-products and general-machinery maker that is putting some projects on hold wrote in the survey.

Some 56% of Japanese firms are shelving or postponing some investment projects slated for this business year, according to the corporate survey, which canvassed 504 big and midsize firms between Aug. 29-Sept. 9.

Managers from around 250 firms responded to the survey, conducted for Reuters by Nikkei Research, on condition of anonymity to voice their opinions more freely.

While a majority of Japanese firms have pushed back some of their capex projects, roughly two-thirds say they are keeping their full-year spending targets intact so far, suggesting a wait-to-see approach, rather than a complete scrapping of projects.

However, 19% said they have cut planned spending while about one in 10 companies is raising expenditures from initial plans.

In Japan, companies tend to draw up capex plans cautiously at the start of the new business year, and increase them as the year progresses.

This slowdown prompted the government to cut its estimate of the quarter’s economic growth to an annual 1.3% from the preliminary 1.8%, reflecting a downgrade in capex growth over that period as the trade war hit corporate demand.

Japanese firms are losing confidence as they come under pressure from a double whammy of external risks and a scheduled increase next month in the national tax hike to 10% from 8%.

“We cannot forecast the future as the tax hike will cause the economy to stagnate,” wrote a manager at a retail firm.

A Cabinet Office survey released on Monday signaled a bleak outlook for consumption. The survey’s “economy watchers” index, which measures business confidence among workers such as taxi drivers, hotel workers and restaurant staff, remained around a three-year low in August.

A tit-for-tat tariff war between the United States and China now involves hundreds of billions of dollars of each country’s goods and threatens global economic growth. Both sides imposed new tariffs Sept. 1 in the latest escalation, though Washington says face-to-face trade talks will resume this month.