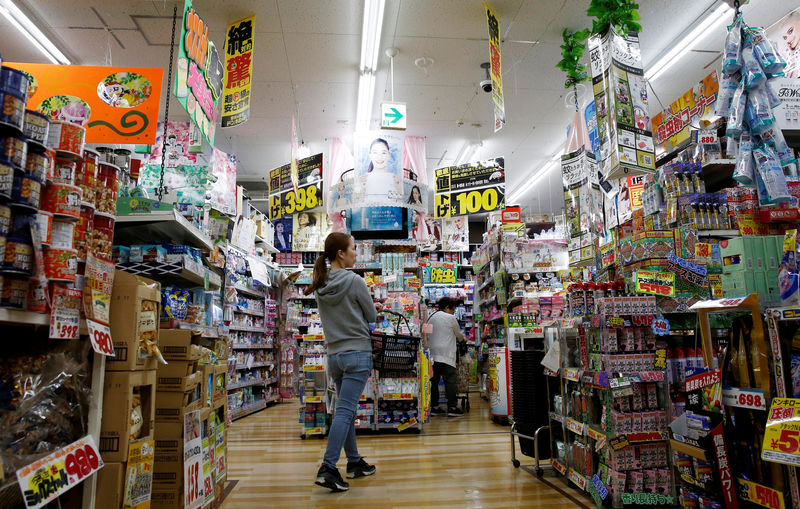 By Kaori Kaneko and Tetsushi Kajimoto

TOKYO (Reuters) – Japan’s household spending rose at the fastest pace on record in September as consumers rushed to buy goods before a sales tax hike, though the test for the economy will be whether the higher levy will squeeze domestic demand in coming months.

Household spending jumped 9.5% in September from a year earlier, the fastest pace of increase since comparable data became available from 2001 and stronger than the median forecast for a 7.8% gain, government data showed on Friday.

It was a tenth straight month of gains, the longest such streak since 2001.

Spending had risen 7.2% in March 2014, a month ahead of the previous sales tax increase but the higher levy subsequently led to a slowdown in consumer spending and sharp economic slump.

From the previous month, it grew 5.5% in September, which compared with the median estimate for a 3.8% increase.

Shinke believes consumer spending and the economy will recover in the first quarter next year after an expected pullback in the current quarter, but said concerns about the outlook remain.

“Consumer sentiment has stayed weak despite the government steps to mitigate the pain from the tax hike. Although deterioration in exports seems to be easing, we need to be cautious about their outlook, so there are risks to the economy.”

Japan rolled out a twice-delayed increase in the sales tax to 10% from 8% on Oct.1, a move that is seen as critical for fixing the country’s tattered finances but that could tip the economy into recession by dampening consumer sentiment.

The government has taken steps to ease the burden on consumers by offering vouchers and tax breaks, mindful of the lessons of the 2014 tax hike.

This time around the tame recovery in wages is raising concerns about the outlook for private spending and the economy as solid domestic consumption has so far partially offset weak global demand.

While separate data showed real wages adjusted for inflation rose for the first time in nine months in September, the sales tax hike and global slowdown are clouding the outlook.

A Reuters poll on Wednesday showed the rush to beat the sales tax hike likely helped underpin solid domestic demand and helped the economy grow for a fourth straight quarter in July-September.

But analysts expect the economy could shrink in the fourth quarter due to the higher tax.

The Bank of Japan kept policy steady last week but tweaked its forward guidance to say it would maintain ultra-low rates or even cut them for as long as needed to gauge overseas risks.

'This team are not quite delivering on first-innings runs': Graeme Swann...

The incredible cost of 'free transfer' Willian: After making 55 of...

'I am not racist and I absolutely hate racism': Ferrari star...