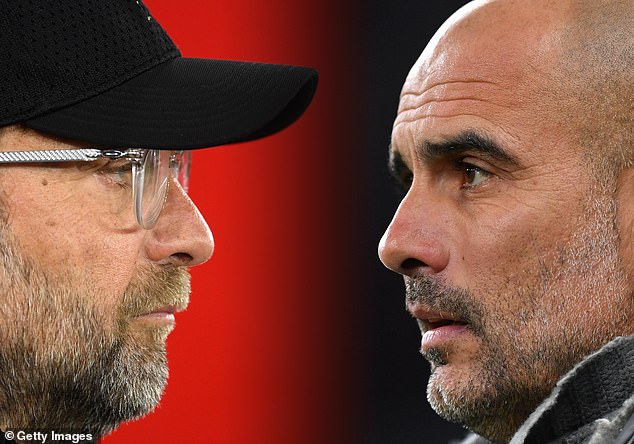 If Pep Guardiola (right) is the Superman of coaching, then Jurgen Klopp (left) is his kryptonite 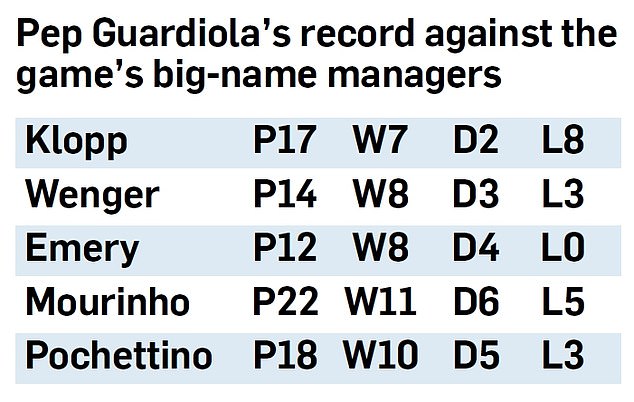 If Pep Guardiola is the Superman of coaching, then Jurgen Klopp is his kryptonite. No other coach comes close to Klopp’s record against Guardiola.

Of the 57 different managers around the world who have faced a Guardiola team on four or more separate occasions, only one has a winning record: Klopp. They’ve met each other 17 times and Klopp has won eight, Guardiola seven. By comparison, Jose Mourinho has won five of their 22 encounters, Mauricio Pochettino has won three from 18, Arsene Wenger three from 14 and Unai Emery none from 12.

So it is curious state of affairs for Guardiola when he heads to Anfield on Sunday: circumstances, injuries, current form and that record against Klopp mean, for once, he wears the status of comparative underdog.

When the history of this period is written, Guardiola’s presence will bestride the era, a coach who changed the way the game was played and who did it while winning the biggest trophies.

Yet there is no doubt, with Claudio Bravo in goal rather than Ederson, with Aymeric Laporte and Rodri injured and with Liverpool having won 19 of their last 20 Premier League games, Guardiola is, relatively speaking, an underdog on Sunday.

Guardiola will not accept that, naturally. ‘I’m not going to take the bus to Anfield on Sunday thinking I am going to lose the game,’ he said. ‘I never have in my career. Always I have to think that if we do some special thing that we planned to do, we have our chance to win.’

He will take solace in the fact that the last time Liverpool lost in the Premier League, it was in January to City. Yet Kevin Keegan, in May 2003, is the only manager alive to take a Manchester City team to Anfield and win.

Not Roberto Mancini, Manuel Pellegrini nor, in his four visits, Guardiola. That was City’s one win at Anfield since Boxing Day 1981, when John Bond was the manager. Les McDowall managed an FA Cup win there in 1956. So that’s three wins in 63 years.

‘No, I cannot explain it,’ said Guardiola, confronted with the record. ‘Last season we were in the last minute to win it and missed the penalty so sometimes it happens. It shows how difficult it is.’

This could be the most delicious Premier League rivalry since an obscure Frenchman called Arsene Wenger turned up at Highbury and started making comments about Sir Alex Ferguson’s wife.

Manchester United and Arsenal, in the era between 1998 and 2004 perhaps matched the quality of these sides; maybe Brain Clough’s Nottingham Forest and Bob Paisley’s Liverpool had something similar between 1978-81. In the modern era, it is hard to recall two teams this good competing for English supremacy.

It is a measure of the magnitude of Sunday’s contest that Guardiola’s team can even be considered outsiders.

Guardiola railed at the suggestion. ‘What does it mean that we are outsiders? The people in the media, the people outside say you are outsider or you are not outsider; you are underdog, you are not underdog.

‘I never went to a game and felt like an outsider and felt like I’m not going to win the game. I never felt it. Never. But of course the position is that they’re six points ahead so they’re playing fantastic all season, the previous season and we have many problems in some departments of the players.’

Yet there is something about Klopp that Guardiola finds hard to beat. This started in the Bundesliga when they were at Borussia Dortmund and Bayern respectively. Klopp could not match the might of Bayern in terms of competing for the league but, head to head, he did well.

Guardiola’s opening game in German football in 2013 was a 4-2 defeat to Klopp’s Dortmund in the Super Cup. That season they each beat each other 3-0 away from home. Bayern won 1-0 at Dortmund in April 2015. What was significant however was that for the first time in Guardiola’s coaching career his team had less possession: 49.5 per cent to Dortmund’s 50.5 per cent.

There have only been two other occasions when a Guardiola team has conceded possession over 90 minutes to an opponent: last season at the Etihad when he played Liverpool and won 2-1; and in the Community Shield in August, which ended 1-1 but which City won on penalties.

It looks an awful lot like Guardiola has adapted his style to counter Klopp. His teams are less fussy about ball possession against Klopp’s because he knows that getting caught on the ball in your own half is bad news.

Guardiola though insists this has not been a conscious decision. ‘Dortmund is a good team and Liverpool is a good team,’ he said. ‘The way they play they have the quality to do that. Sometimes you want to play in your way but the opponents are so good you have to adapt a little bit.

‘The plan for last season was not to be defensive. Maybe we didn’t want a game like up and down [the pitch] and up and down: [like that] Liverpool is unstoppable. We play against the Champions of Europe.

‘Defensive was not the plan. It’s because they were so good and they push you down. You cannot build up like usual because they are incredibly organised and do everything well. Everything. You see the team, so what is the weak point of Liverpool? It’s difficult to find it, so difficult.’

However you explain it, Klopp’s heavy metal football, that magnificent organised chaos of incisive counter attacks, has done something no other coach has managed: he has forced Guardiola on to the back foot.