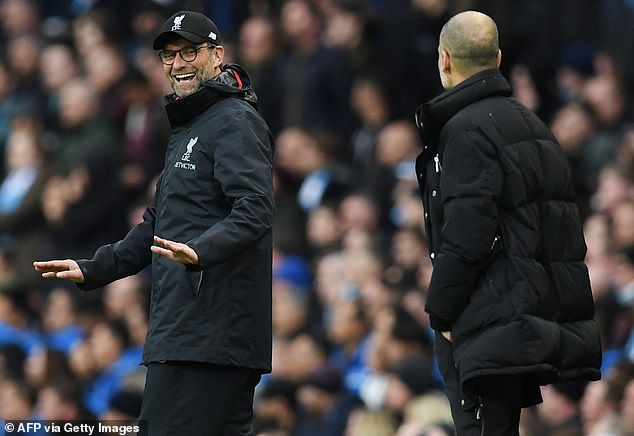 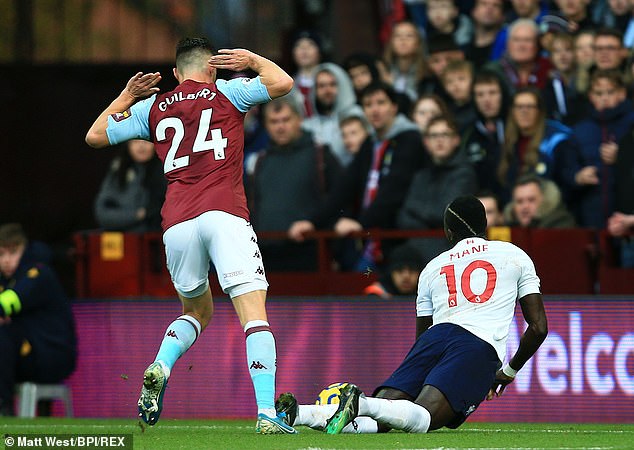 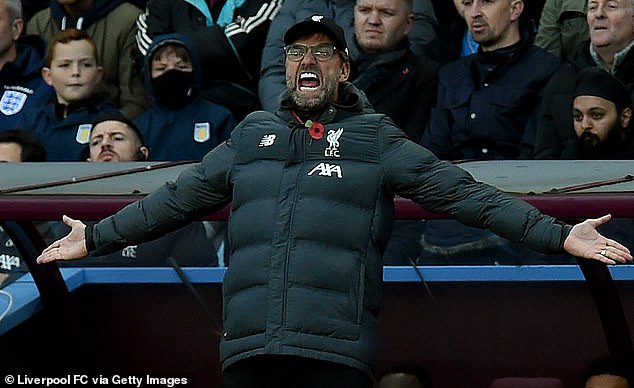 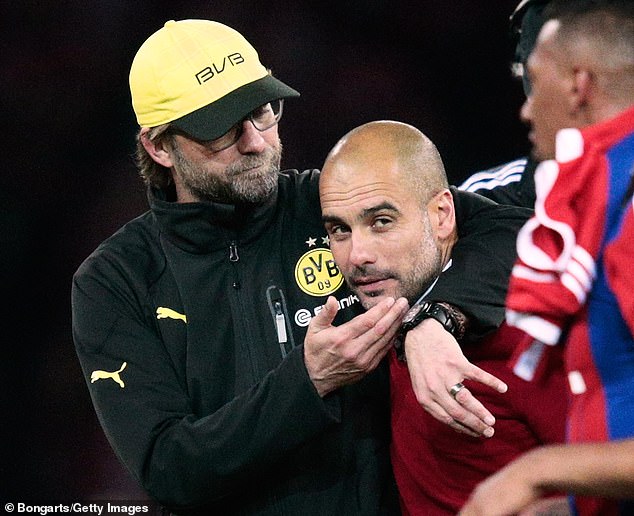 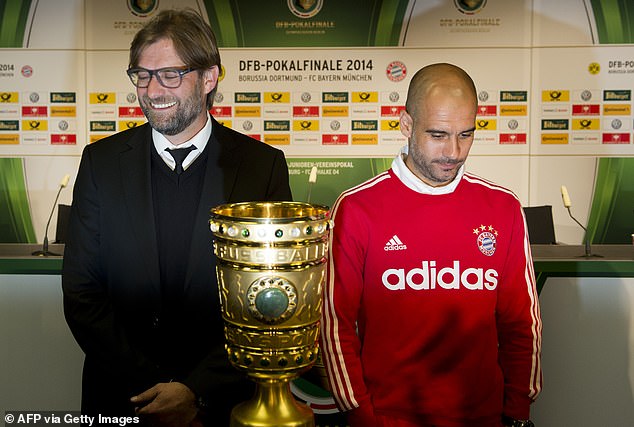 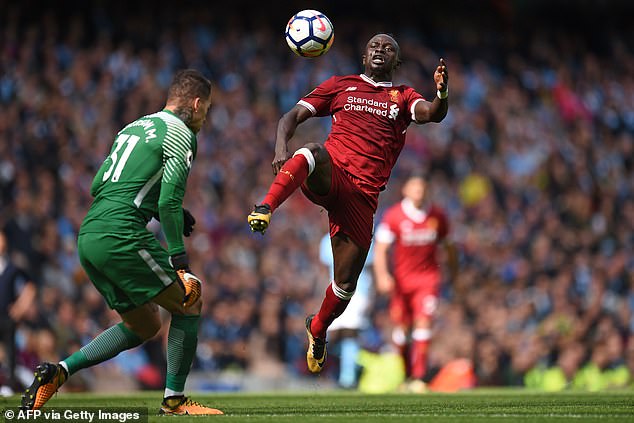 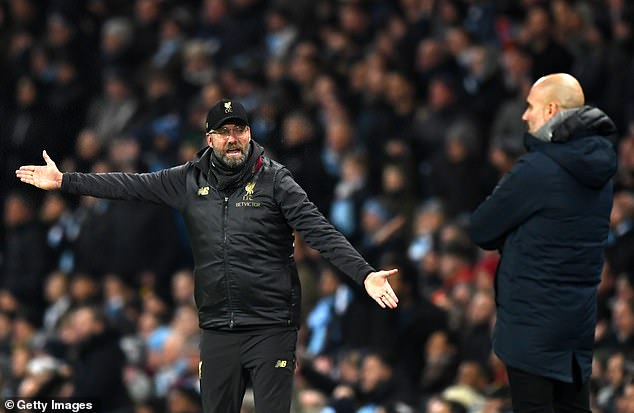 As the rivalry between City and Liverpool has grown, so has the tension between managers 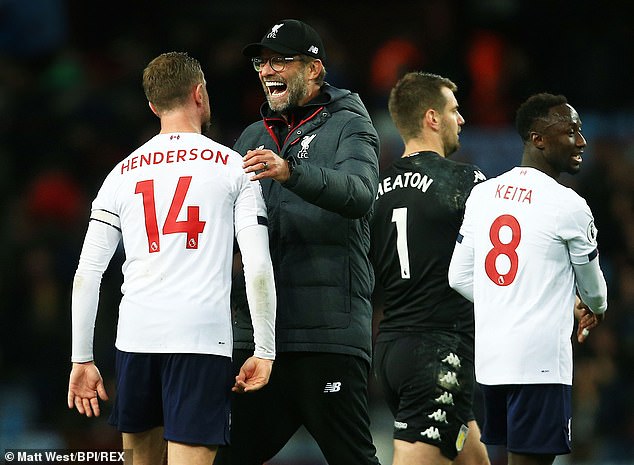 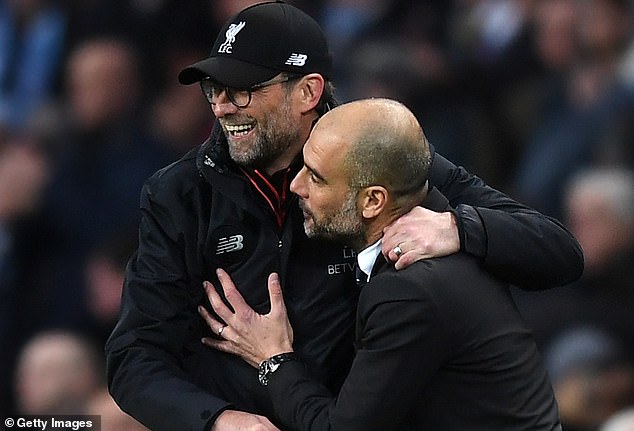 As Liverpool and Manchester City run their two-horse race for the Premier League once more, the rivalry between both clubs is growing.

Where before both managers showered complements on each other, the mutual respect narrative has shifted in recent weeks.

Pep Guardiola’s side find themselves heading into Sunday’s clash desperate not to lose – a result that would see them cut nine points adrift of the league leaders.

And the usually serene Spaniard has appeared rattled, starting the psychological warfare after both sides fought back for 2-1 wins last weekend.

He wasn’t directly asked about Sadio Mane or his title rivals but chose to set the agenda and target the Senegal international, arguably Liverpool’s most effective player this season.

‘Sometimes he is diving,’ Guardiola told BBC Sport. ‘Sometimes he has this talent to score incredible goals in the last minute. He’s a talent.’

Guardiola knew the effect his remark would have on Merseyside. Perhaps he was also giving referee Michael Oliver food for thought.

At the time, Klopp dismissed the diving claims out of hand but has since hit back.

‘I couldn’t really believe it to be honest and then I saw it,’ the German said. ‘I am not sure if Pep spoke in that moment about Sadio or the team – both is not too nice to be honest.

‘I am not too sure if I want to put oil on the fire. I am not interested in these kind of things. And I promise not to mention tactical fouls. That is maybe already too much.’

Klopp also went on to hint that City are fixated on Liverpool. With Guardiola clearly having learned of Mane’s yellow card for diving straight after his own game, Klopp suggested it was strange to bring it up that early.

The head-to-head record between Klopp and Guardiola is perfectly poised. Both men have won seven matches against each other and drawn twice.

It was back in the Bundesliga that they first crossed paths six years ago. Klopp led Borussia Dortmund past Bayern Munich in the German Super Cup back in 2013.

Guardiola exacted revenge later that season with a 3-0 win and though Dortmund reversed the scoreline at Allianz Arena, Bayern had already won the title.

Bayern also beat their rivals in the German Cup final. There was no doubt that it was first blood Guardiola in their duel.

The Spaniard led the Bundesliga champions to two league victories over Klopp’s Dortmund the following season too, but the charismatic German exacted some revenge in the Cup semi-final as his side went through on penalties. That was Klopp’s last season with Dortmund and the next time he would clash with Guardiola was on English soil.

‘He is the best attacking coach in the world,’ gushed Guardiola.

He also said: ‘If it is an open game at Anfield, you don’t even have one chance, not even one per cent of a chance.’

The Reds scraped a 1-0 win courtesy of Georginio Wijnaldum’s early header, they shared the spoils in the away game but there was far more to come the following season.

In the 2017-18 season, City and Liverpool met four times. Mane’s red card in the first encounter led to a 5-0 demolition at the Etihad. ‘I was outside with Pep and we both didn’t think it’s a red card’, Klopp revealed afterwards.

A 4-3 win for Liverpool back at Anfield in January settled that score. A second half onslaught settled it despite some nervy defending and a late comeback. ‘All credit to the opponent, we know how difficult it is against a Jurgen Klopp team, so aggressive, at Anfield too’, Guardiola reflected.

The drama was far from over and over the course of two Champions League quarter-final games, Liverpool showcased the best of their relentless attacking intensity.

They swept to a 3-0 victory at Anfield and followed it up with a 2-1 triumph at the Etihad. The crushing 5-1 aggregate win ended Guardiola’s ambitions of winning the Champions League with City for another season and he admitted they had to ‘recover mentally’.

Last season, with Liverpool again the main title challengers, Guardiola’s side were denied three points at Anfield as Riyad Mahrez walloped his late penalty over the bar. They shared the spoils but City deserved their win at home. Leroy Sane’s effort off the post proved decisive and Guardiola’s men went on to become champions by a point.

There was still great public declarations of respect between Klopp and Guardiola despite the tension of an incredibly tight title race. The Liverpool boss even made jokes at his own expense.

He said: ‘Pep [Guardiola] is lively on the touchline like me, but not that lively. He looks better when he’s shouting. Pep always looks perfect – body, clothes, everything is perfect.

‘When I shout, I look like a serial killer. It’s my face – I bite my teeth in a certain way. I look at babies with exactly the same face. Like, ‘You’re so cute.’ And very often the babies start howling.’

This week’s jibes have been a departure from Guardiola and Klopp’s cordial exchanges.

The City boss has backtracked somewhat over his Mane comments: ‘Jurgen said he knows Sadio better than me. I have an incredible respect and the message in the football always try to be like this, always positive and attractive. My son and my daughter, when they win in the last minutes, they ask me how lucky they are. I say it’s not lucky.

On Sunday, Klopp and Guardiola will stand feet apart from one another as the teams built in their image go toe-to-toe. As Anfield shakes with noise, perhaps the cracks that have started to appear in their relationship will widen.