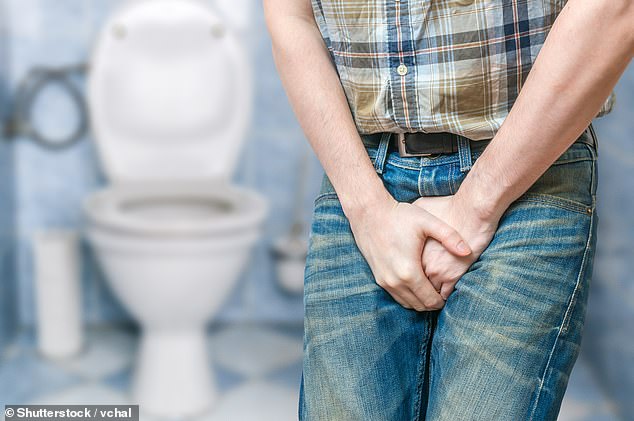 A man who found it painful to urinate and ejaculate has had a bullet removed from his bladder, doctors have revealed.

The 42-year-old, from Connecticut, experienced shooting pain whenever he used the toilet or ejaculated for a year before he sought help.

It turned out the unidentified patient was shot in the bladder in 1990 – but the bullet was never removed because surgeons couldn’t access it without harming him.

Doctors who treated him said over time a bladder stone grew around the bullet and eroded through the wall of the organ and became stuck.

The bullet fragment was safely removed and measured approximately 30x25mm, medics who treated him wrote in a medical journal.

Joanna Marantidis, who is based at the Frank H Netter MD School of Medicine at Quinnipiac University, published the tale in Urology Case Reports.

Medics said that at the time of the shooting, the man needed a catheter – a tube which is passed into the bladder to drain urine.

It helped him use the toilet for several weeks before he made a full recovery and had no issues for nearly two decades.

But in the last year he started experiencing shooting pains in the right side of his bladder and his urine would randomly cut off when he used the toilet.

When he arrived with symptoms, doctors performed a cystoscopy – a procedure to look inside the bladder using a thin camera – and found the bullet.

Both are used to treat bladder stones – hard lumps of minerals that can form inside the bladder when it’s not completely empty of urine.

In a cystolitholapaxy, an instrument called a cystoscope is inserted into the bladder to locate the bladder stone or stones.

The cystoscope is a long, narrow tube with a small camera at one end.

It is connected to a stone-crushing device, which uses laser energy or ultrasound waves to break up the stones into smaller fragments.

A cystolithotomy is the surgical removal of bladder stones via a lower abdominal incision.

It is normally used when a  cystolitholapaxy has failed to remove the stones.

They put the patient under using anaesthetic and carried out a cystolitholapaxy.

The medical procedure involves using a stone-crushing device with lasers or ultrasound waves to break up bladder stones into smaller fragments.

The medics used a laser to shave down the bullet, eroding away its outer layer of stone.

But the inner portion of the stone proved difficult to break down. Bullet debris and stone material were recovered when the patient next urinated.

The remaining bullet fragment had sharp edges and would have caused damage if it passed through the bladder neck and urethra.

The patient returned to the operating room for an open cystolithotomy – the surgical removal of bladder stones via a lower abdominal incision.

The incision was closed in two layers, and the bullet was handed over to police when it was extracted.

Doctors noted that current research advises surgeons remove bullet fragments in joints, vessels or around the eye to avoid it causes more damage down the line.

But they recognise there is limited data on whether it should be removed to prevent long-term complications elsewhere.

Consultant urologist Dr Rich Viney, based at the Bladder Clinic in Birmingham, told MailOnline: ‘This is an unusual case but not unique.

‘When confronted with a foreign object the body will initially wall it off with scar tissue.

‘It will then, slowly propel it towards the nearest external surface to expel it from the body. Normally this is back long the entry route taken by the foreign object.

‘In this case the bullet had passed through the bladder so it is no surprise that it has been expelled back along the tract into the bladder.

‘The time spans for this kind of process is variable but can often be measured in years. Once in the bladder it might pass down the urethra if small enough.’

He added: ‘If not small enough stone will sit in bladder and crystals will form on its surface forming a bladder stone.’