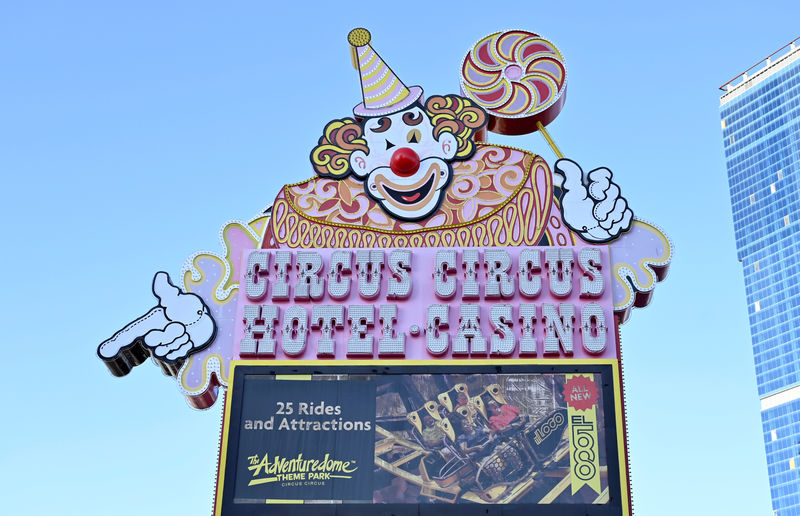 © Reuters. The Circus Circus hotel and casino is seen along the Las Vegas strip

(Reuters) – MGM Resorts International (N:MGM) said on Tuesday it would sell its Bellagio and Circus Circus resorts in Las Vegas in separate deals valued at about $5 billion, as the U.S. casino operator seeks to monetize its real estate assets and bolster its balance sheet.

Blackstone (NYSE:BX) Real Estate Income Trust will acquire the Bellagio for $4.25 billion through a 95-5 joint venture with MGM and will lease it back to a unit of the casino company for an initial annual rent of $245 million.

MGM said it would sell Circus Circus Las Vegas to an affiliate of Treasure Island owner Phil Ruffin for $825 million.

The divestment come nine months after MGM, which had a long-term debt of $15 billion as of December 2018, formed a committee to evaluate its real estate portfolio amid its move to an asset-light model.

MGM Chief Executive Officer Jim Murren said the company would use the proceeds from both the deals to “build a fortress balance sheet” and return capital to shareholders.

Both deals are expected to close in the fourth quarter of 2019.

MGM’s other assets include MGM Grand and MGM pringfield and it also holds stakes in CityCenter and MGM Growth Properties LLC.

In January, MGM announced plans to cut costs and boost growth, proposing to increase annualized adjusted earnings before interest, taxes, depreciation and amortization by $300 million by the end of 2021. (https://reut.rs/33A19ng)