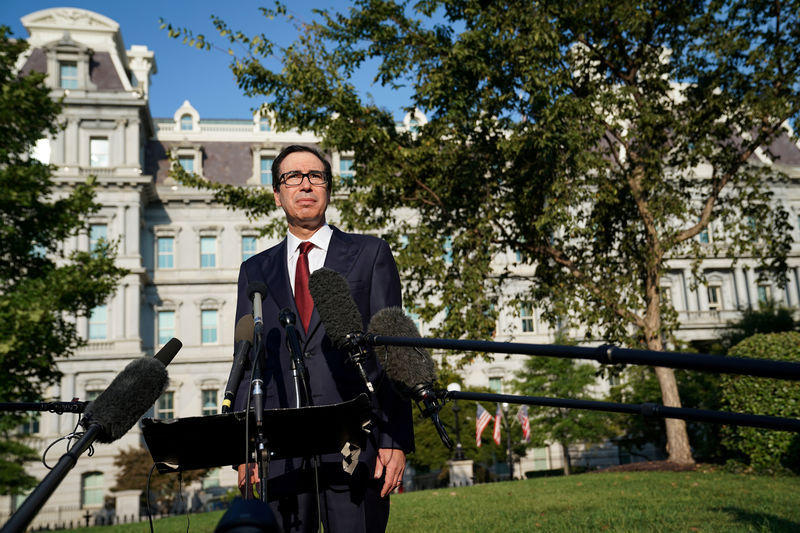 WASHINGTON (Reuters) – U.S. Treasury Secretary Steven Mnuchin on Thursday said the United States will issue 50-year bonds if there is “proper demand,” a moved aimed at “derisking” the government’s $22 trillion of debt and locking in low interest rates.

“We are going to start with 50 years, and if the answer is, 50-years is successful, we’ll consider 100-year bonds,” Mnuchin said in an interview with New York Times’ DealBook and streamed online live, adding that he began looking into the possibility of ultra-long U.S. bonds two years ago.

U.S. President Donald Trump has proposed a different fix for the rising cost of the record U.S. debt, calling on Wednesday on the “boneheads” at the Federal Reserve to reduce interest rates to below zero so as to reduce interest-rate payments.

The Fed is widely expected to cut interest rates by a modest quarter of a percentage point next week when U.S. rate-setters meet.

Fed Chair Jerome Powell and other policymakers see U.S. economic conditions as still generally favorable despite a global slowdown and a still-unresolved U.S.-China trade war, and they have consistently pushed back against the notion of negative rates or of setting rates to cater to political pressure.

On Thursday the European Central Bank pushed its target rates further into negative territory to try to boost growth, prompting a complaint from Trump that Europeans are “paid” to borrow money, while the Fed “just sits, and sits, and sits.”

Asked about negative interest rates, Mnuchin indicated that he is not the fan that his boss is.

Mnuchin did predict that the ECB’s easing policy could push more global capital into U.S. Treasuries, whose yields, though historically low, are much higher than those on German government bonds.

“My expectation is you are going to see a big flow of funds” into 10-year Treasuries, Mnuchin said. That would push U.S. bond prices higher, and yields lower, giving a potential added boost to the case for issuing ultra-long U.S. bonds to lock in low borrowing costs.