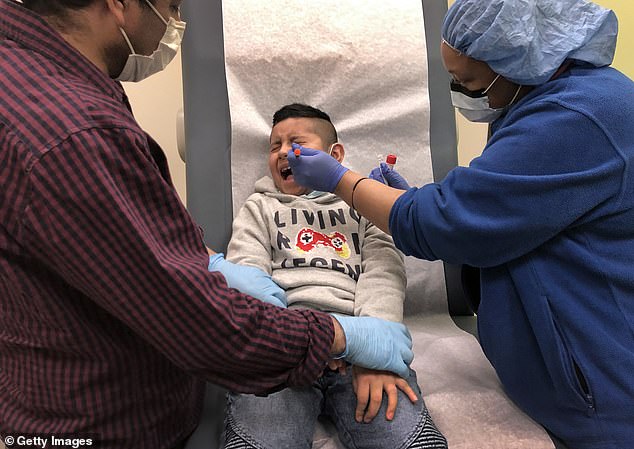 A new study from the University of Alberta in Canada found 35.9% of children who tested positive for COVID-19 were asymptomatic. Pictured: Guatemalan immigrant Junior, 7, receives a COVID-19 swab test from a nurse as his father Marvin holds him down at a clinic  in Stamford, Connecticut, May 2020 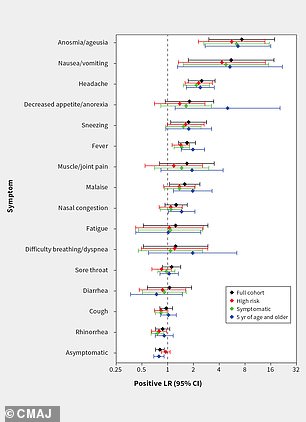 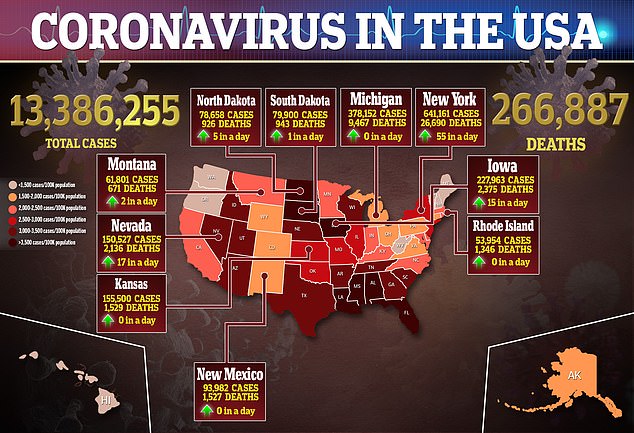 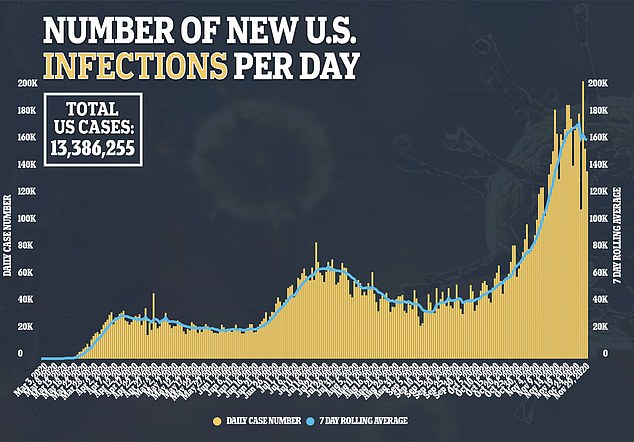 More than one-third of children who contract coronavirus are asymptomatic, a new study suggests.

Researchers found that about 36 percent of children did not experience classic  symptoms of COVID-19 such as cough, fever or shortness of breath.

Additionally, while the the most common signs among symptomatic children who tested positive were cough and runny nose, they were also common among those with negative test results.

But symptoms such as nausea or los of taste and smell were up to seven times more common in children with the virus.

The team, from the University of Alberta, in Canada, say the findings provide more evidence that screenings may be of no use and that the only way to test how widespread the disease is is through nasal swab tests.

‘The concern from a public health perspective is that there is probably a lot of COVID-19 circulating in the community that people don’t even realize,’ said Dr Finlay McAlister, a professor of medicine at the University of Alberta.

‘When we see reports of 1,200 new cases per day in the province of Alberta, that’s likely just the tip of the iceberg – there are likely many people who don’t know they have the disease and are potentially spreading it.’

For the study, published in the Canadian Medical Association Journal, the team looked at nearly 2,500 children who were tested between April and September.

All of them were at least five years old and were tested because of contact tracing whether they were symptomatic or not.

Of the children, 1,987 tested positive for COVID-19 and the remaining 476 had a negative result.

Among the children who contracted the virus, 714 of them, 35.9 percent, reported being asymptomatic.

‘Of course, kids are at risk of contracting many different viruses, so the COVID-specific symptoms are actually more things like loss of taste and smell, headache, fever, and nausea and vomiting, not runny nose, a cough and sore throat,’ McAlister said.

Cough was the most symptom that children experienced, appearing in 24.5 percent of those who tested positive.

The next most common were runny nose and sore throat, with 19.6 percent and 15.7 percent, respectively, reporting the symptoms.

‘But fever, headache, and loss of taste or smell are the big ones for indicating that one may have COVID-19 rather than another viral upper respiratory tract infection,’

However, symptoms including anosmia/ageusia (loss of taste and smell) nausea and/or vomiting and headache were much more predictive of coronavirus.

Children with coronavirus were seven times more likely to report losing their sense of taste or smell compared tot hose who tested negative.

Nausea or vomiting was three-fold more likely in those with coronavirus and headache was more than twice as common in kids with COVID-19.

McAlister said that if anyone feels ill they should stay home and even those who fell well should practice measures such as social distancing, handwashing and wearing a mask.

‘Some people with COVID feel well and don’t realize they have it so they socialize with friends and unintentionally spread the virus, and I think that’s the big issue,’ he said.

‘It speaks to the school safety programs. We can do all the COVID-19 questionnaires we want, but if one-third of the kids are asymptomatic, the answer is going to be no to all the questions – yet they’re still infected.’