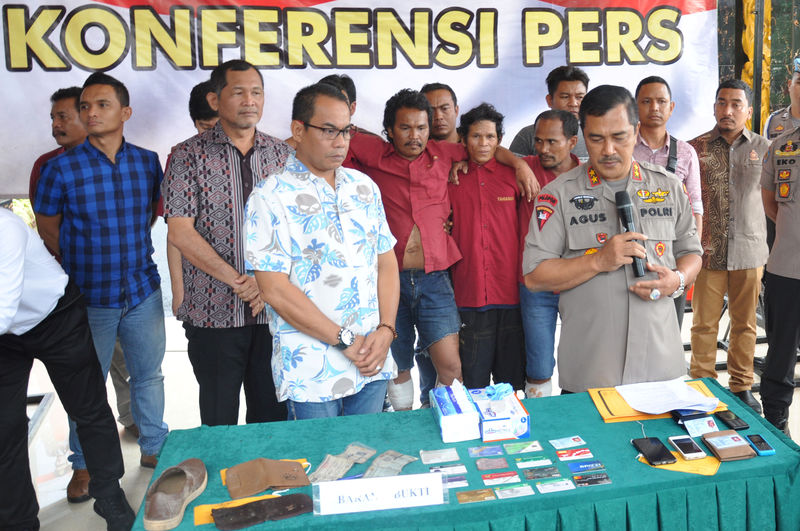 By Stanley Widianto and Jessica Damiana

JAKARTA (Reuters) – The murder of two Indonesian activists, which police say was ordered by a palm oil businessman, highlights the escalating violence and threats faced by environmentalists who challenge the industry, rights groups say.

Martua Parasian Siregar, 55, and Maraden Sianipar, 42, were found dead 10 days ago with multiple stab wounds near a palm plantation in the island of North Sumatra.

Environmental campaigners and media watchdogs say the two men were former journalists who had got involved in a dispute between the palm oil company that operated the land and local residents.

Police said on Friday they had arrested the head of the Amelia palm oil company, who they identified only as “H” or “Harry”, on suspicion of having paid several men about $3,000 to kill the two activists.

“This strengthens our suspicion that human rights violations in palm oil companies are rampant,” said Dana Prima Tarigan, who heads green group the Indonesian Forum for the Environment (WALHI), which had met with the men prior to the deaths.

“This is a threat to activists and journalists,” he told Reuters.

Police said the palm oil concession where the men’s bodies were found was closed by the government in 2018 for illegally clearing hectares of forest area.

The two activists had been working with local farmers to gain control of the palm crop there, police said.

“The motive of the incident revolves around a land conflict case,” North Sumatra Police Chief Agus Andrianto told reporters, adding that four other suspects had been arrested in the case, with another three still at large.

“We highly believe that H instructed someone to get rid of the men … or slaughter them when they came to the property,” Andrianto said, adding that “H” had denied the allegations.

Local media reports said “H” was businessman Wibharry “Harry” Padmoasmolo, who ran Amelia. Reuters was not able to immediately reach him for comment.

For civil society groups, the killings show that rights abuses in the $60-billion global palm oil trade remain widespread, with growing intimidation against those who investigate them.

The murders come weeks after the death of WALHI environmental lawyer Golfrid Siregar in North Sumatra.

Although police have said his death was a road accident, rights groups say the circumstances were mysterious and have called for further investigation.

Palm oil, the world’s most widely used edible oil, is found in everything from margarine to biscuits and soaps, but has faced growing scrutiny in recent years from critics who blame its production for forest loss, fires and worker exploitation.

“Our palm oil industry was, and is, built upon the smeared blood and suffering of residents,” Greenpeace campaigner Annisa Rahmawati said when asked about the two activists’ murders.

(This story changes “he” to “she” in sixth paragraph)

Scott Parker will keep faith with Fulham's play-off heroes in the...