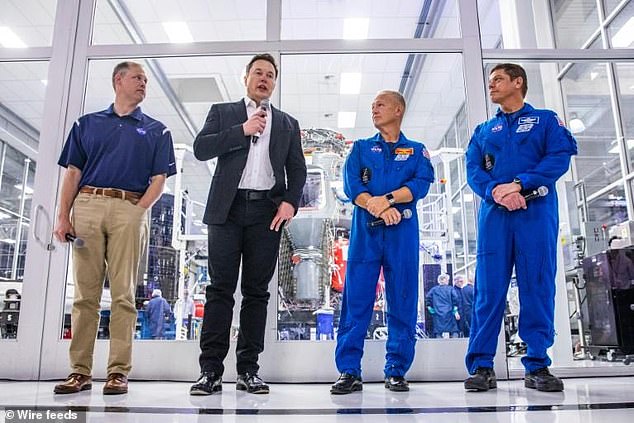 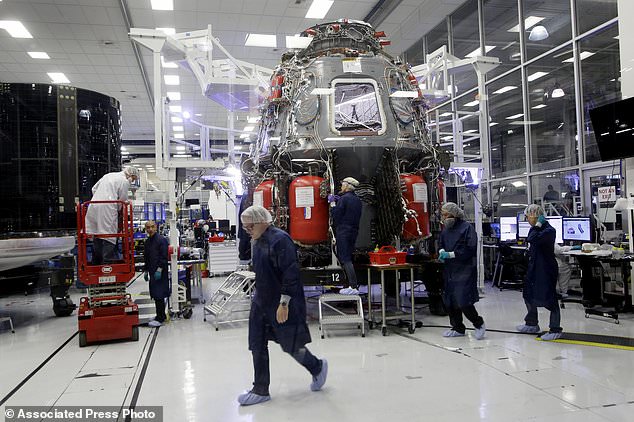 SpaceX employees work on the Crew Dragon spacecraft that will astronauts to and from the International Space Station, from American soil, as part of the agency’s commercial crew Program (AP Photo/Alex Gallardo)

The March 2 test, the first launch of U.S. astronauts from U.S. soil in eight years, will inform the system design and operations (Artist’s impression)

During the conference, Bridenstine re-hashed Tweets criticizing SpaceX for failing to meet timelines for the development of its Crew Dragon spacecraft, saying  they were meant as a warning to all of the space agency’s contractors about setting realistic development schedules.

‘What we’re trying to do is get back to a day where we have realistic cost and schedules,’ said the NASA Administrator.

‘So I was signaling – and I haven’t done it just to SpaceX but to all of our contractors – that we need more realism built into the development timelines.’

Tensions between the two parties were stoked after Musk staged a major event to show off a prototype of an unrelated rocket he calls the Starship last month.

Bridenstine apparently felt that the fanfare overshadowed progress, or lack thereof, on SpaceX’s Crew Dragon capsule which it’s developing for NASA’s use and is already years behind schedule.

In a statement posted to Twitter, Bridenstine singled out SpaceX saying the agency ‘expects to see the same level of enthusiasm focused on the investments of the American people. It’s time to deliver.’

Bridenstine added that NASA has programs that have been in development for years.

Musk responded during his Starship reveal that SpaceX resources are overwhelmingly focused on the Dragon crew capsule and the Falcon rocket that will launch it.

SpaceX is developing a capsule under NASA’s commercial crew program to launch astronauts to the international space station so that the U.S. does not have to rely on Russian rockets and spacecraft.

During Thursday’s press conference, Musk said SpaceX was within 1 percent of the commercial crew program budget.

‘The NASA request for commercial crew for several years was substantially reduced by Congress, I think in some cases by 50 percent,’ Musk said.

‘It’s pretty hard to stay on schedule if you’ve got half as much money, but we didn’t spend more money, it just took longer.’

Despite the tensions, both Musk and Birdenstine agreed that Crew Dragon could be ready to take its first-ever human passengers into space by the first quarter of 2020.

Before it’s cleared for launch, however, it must pass critical safety tests including one’s on its emergency abort capability.

Tests on the craft’s safety systems went notoriously awry earlier this year causing the capsule to be engulfed in flames.

The capsule measures about 20 feet tall by 12 feet in diameter, and will carry up to 7 astronauts at a time.

The Crew Dragon features an advanced emergency escape system (which was tested earlier this year) to swiftly carry astronauts to safety if something were to go wrong, experiencing about the same G-forces as a ride at Disneyland.

It also has an Environmental Control and Life Support System (ECLSS) that provides a comfortable and safe environment for crew members.

Crew Dragon’s displays will provide real-time information on the state of the spacecraft’s capabilities, showing everything from Dragon’s position in space, to possible destinations, to the environment on board.

Those CRS-2 Dragon missions will use ‘propulsive’ landings, where the capsule lands on a landing pad using its SuperDraco thrusters rather than splashing down in the ocean.

That will allow NASA faster access to the cargo returned by those spacecraft, and also build up experience for propulsive landings of crewed Dragon spacecraft.

Penguins can fire their faeces out of their rectum with such power they reach more than FOUR FEET away, scientists find

Air filter can 'catch and kill' the coronavirus INSTANTLY after heating it to 392 degrees – and 99.8 percent of the virus was terminated...

The Maldives meets Miami: There's not a thatched roof in sight...