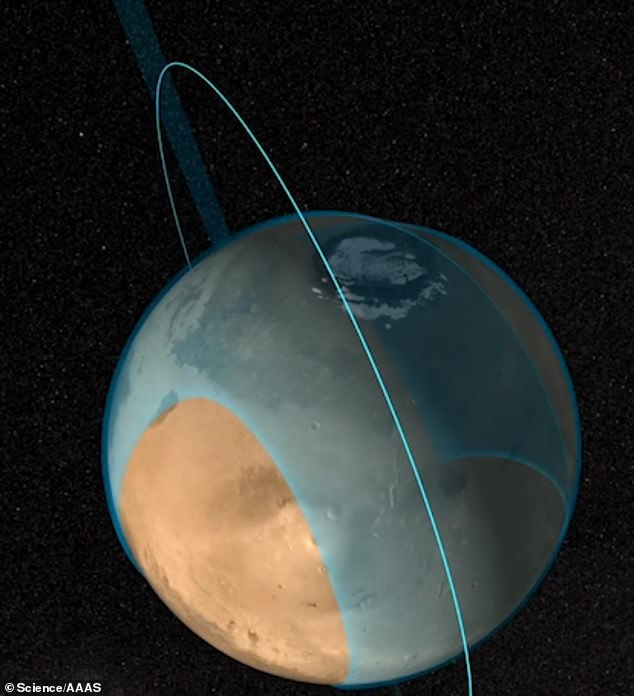 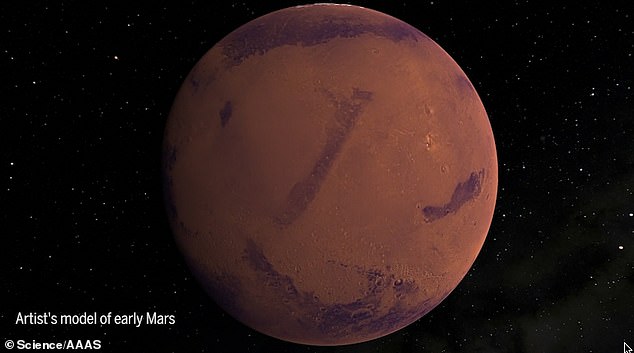 Early Mars would have had a much thicker atmosphere, closer to that of the Earth and would likely have had liquid water on the surface (NASA artist image) 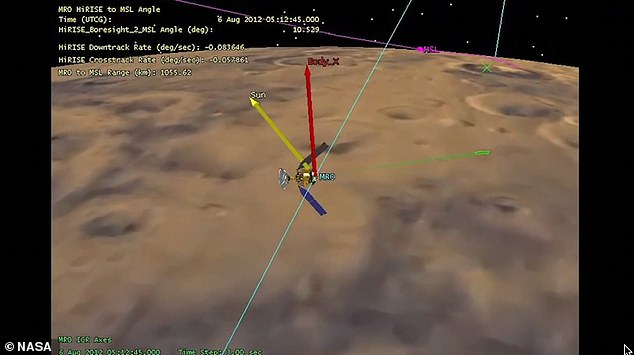 Details of items on the landscape such as mountains, canyons and basins are held within the seasonal winds despite blowing up to 170miles above the surface 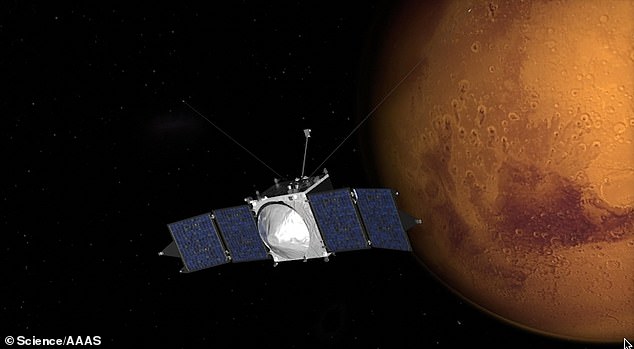 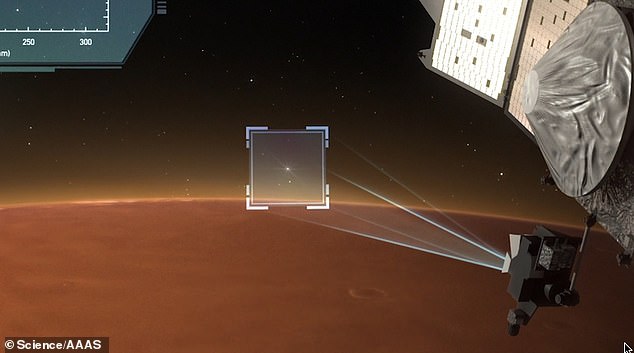 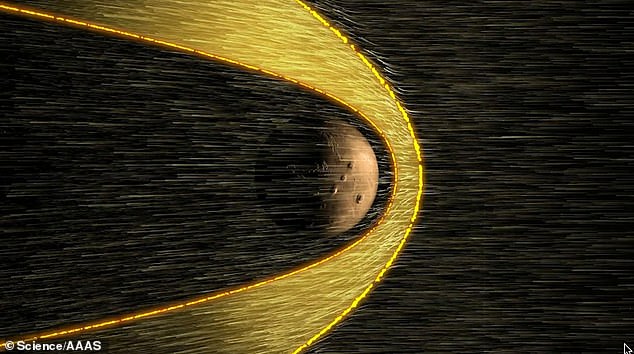 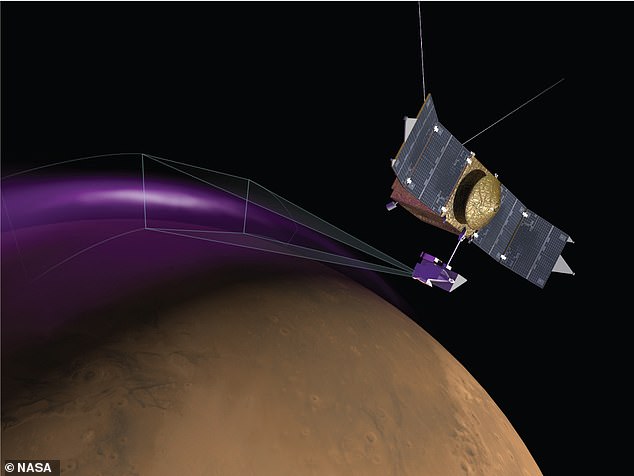 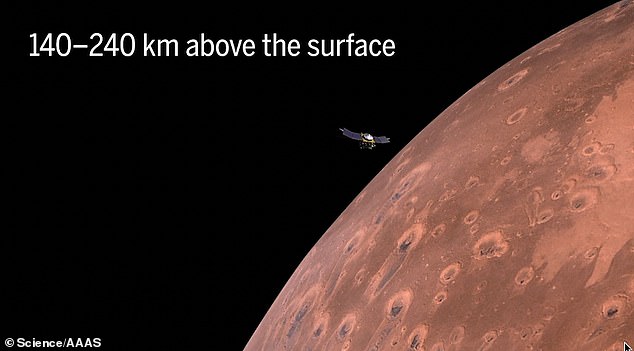 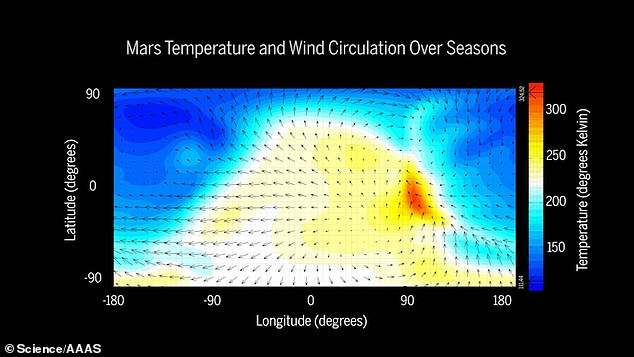 Global wind patterns on Mars have been mapped for the first time by scientists who have been studying the Red Planet’s upper atmosphere.

The team had to remotely re-program NASA’s MAVEN spacecraft which has been in orbit around Mars since 2013 in order to capture the data needed for the study.

Researchers from the University of Maryland Baltimore measured the atmosphere for two days per month over the course of two years from 2016 to 2018.

They found that the circulation patterns of the winds in the upper atmosphere were vary stable from season to season but that wasn’t the case for shorter-term winds.

The team say the information from Mars will help inform similar studies on Earth, and help us better understand planetary climate.

‘On Mars, the average circulation is steady, but if you take a snapshot at any given time, the winds are highly variable,’ says Mehdi Benna, a lead on the project.

‘More work is needed to determine why these contrasting patterns exist.’

Another surprise for the team was discovering than winds miles above the surface are able to retain information about the land forms below.

Details of items on the landscape such as mountains, canyons and basins are held within the seasonal winds despite blowing up to 170miles above the surface.

As the air mass flows over those features, it creates waves – ripple effects – that flow up to the upper atmosphere and can be detected by MAVEN’s equipment.

‘On Earth, we see the same kind of waves, but not at such high altitudes. That was the big surprise, that these can go up to 280km (170miles) high’, Dr Benna said.

The Mars findings are based on local observations, rather than indirect measurements, unlike measurements taken on Earth’s upper atmosphere.

The team came up with the technology to capture the measurements as part of a project to study the way the winds in the upper atmosphere on Earth worked, but decided to use it on Mars first.

The team have two ideas for why the waves, called ‘orthographic waves,’ last so long unchanged showing the surface features.

For one, the atmosphere on Mars is much thinner than it is on Earth, so the waves can travel farther unimpeded, like ripples travelling farther in water than in molasses.

Also, the average difference between geographic peaks and valleys is much greater on Mars than it is on Earth.

It’s not uncommon for mountains to be 12miles tall on Mars, whereas Mount Everest is just over 5.5miles tall, and most terrestrial mountains are much shorter.

‘The topography of Mars is driving this in a more pronounced way than it is on Earth,’ Dr Benna says.

MAVEN has been orbiting Mars since 2013 and capturing a range of information on the composition of the atmosphere.

In 2016 a research team led by Mehdi Benna asked to re-programme the Mars Atmosphere and Volatile EvolutioN (MAVEN) spacecraft and instruments.

They wanted to see if parts of the instrument normally stationary could ‘swing back and forth like a windscreen wiper’ in order to capture atmospheric data.

The team finally convinced NASA to make the necessary changes and were able to begin collecting data the same year.

They plan to continue analysing the data from the study as they believe it will help them determine whether the same basic processes are in action in Earth’s upper atmosphere.

‘Ironically, we had to go take these measurements on Mars to eventually understand the same phenomenon on Earth,” Dr Benna says.

“Ultimately the results will help us understand the climate of Mars. What is its state and how is it evolving?”

The team plan to keep measuring. They already have two years worth of data but want more to get a more detailed picture.

‘It’s a trove of information that can be examined in ways not yet imagined, to learn even more about how planets work’, he said.

As part of its original mission, MAVEN revealed that solar wind and radiation were responsible for stripping the Martian atmosphere.

This transformed the planet from one that could have supported life billions of years ago to the frigid desert world we know today.

Researchers hope to be able to use the latest information on Martian wind to get a better idea of exactly how that process worked.

The paper has been published in Science documents.

The Mars Curiosity rover was initially launched from Cape Canaveral, an American Air Force station in Florida, on November 26, 2011.

In late January, 2018, the Curiosity team on Earth received copious new images from the rover through a record-setting relay by Nasa’s Maven orbiter, surpassing a gigabit of data during a single relay session from Mars for the first time in history.

Nasa’s Jet Propulsion Laboratory in Pasadena, California, released this image as a single panoramic shot, which gives an overview of the rover’s path along the crater’s outer edge.

The image features a number of key features spotted by the rover on its travels. This included:

– It was first spotted by an orbiting spacecraft

– Experts believe it could reveal the inner makeup and history of the plains on the floor of Gale Crater.

– It could also provide insight into past flows of water and may provide evidence of whether water played a roll in layering rock in the region.

– This area is Curiosity’s landing site

– It was named after the late author Ray Bradbury who wrote various books about Mars including ‘The Martian Chronicles’.

– This area could have offered favourable conditions for microbial life.

– The name of this dune field is a tribute to British military engineer Ralph Bagnold (1896 to 1990) who studied how winds move sand particles of dunes on Earth.

– These dunes are actively migrating. They are the first active dunes explored in situ on another planet

– The larger of the two craters was named Arima after a town on the island of Trinidad and the smaller crater has been left unnamed.

Heavy rainfall expected in Northeast and Northwest over the weekend