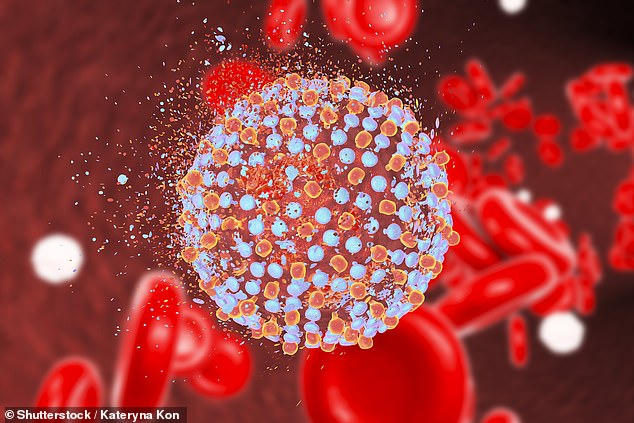 Public Health England fears there are almost 100,000 hepatitis C patients in the UK who have not yet been diagnosed

Tens of thousands of Britons are unaware they have a deadly liver infection, health officials have warned today.

Public Health England fears there are almost 100,000 hepatitis C patients in the UK who have not yet been diagnosed.

The virus is spread through coming into contact with the blood of someone infected – often drug users who share needles.

If left untreated, the curable infection – which can also be spread through sharing toothbrushes – can lead to liver cancer or failure.

PHE is now urging anyone who believes they may have been at risk to come forward and get tested.

Helen Harris, a senior scientist at the Government-run body, said it is ‘so important to find and treat those who may be infected’.

She added: ‘Hepatitis C can have devastating consequences but most cases can be cured if detected in time.

‘Anyone who may be at risk of infection, in particular those who have ever injected drugs, even if they injected only once or in the past, should get tested.

Hepatitis C is inflammation of the liver and there is no preventive vaccine.

Most aren’t aware that they are infected, according to the CDC.

Spread through contaminated blood, hepatitis C tends to develop into a chronic infection after six months.

The infection attacks the liver, leading to cirrhosis or liver cancer.

‘Given that new treatments provide a cure in around 95 per cent of those who take them, there has never been a better time to get tested.’

Estimates suggest around 143,000 people in the UK had hepatitis C in 2018, of which two thirds are unaware they have it.

It is most commonly spread through sharing needles contaminated with the virus, but even sharing razors or toothbrushes pose a risk.

Rachel Halford, chief executive of The Hepatitis C Trust, said it is ‘encouraging’ that hepatitis C appears to be on the decline.

But she added: ‘It is concerning that latest estimates suggest that around two-thirds of those remaining could be living with undiagnosed infection.

‘It is therefore essential that we increase diagnoses to ensure we achieve elimination by 2030 at the latest.’

Hepatitis C is currently one of the leading killers globally, accounting for more than 1.3million deaths per year – as many as HIV, TB and malaria.

If left untreated, the infection can cirrhosis – or scarring of the liver. Over time, this can cause the liver to stop working properly.

In severe cases, life-threatening problems such as liver failure or liver cancer can eventually develop, according to the NHS.

The World Health Organization has called for countries to work to eliminate hepatitis C by 2030, which the UK is on track to achieve.