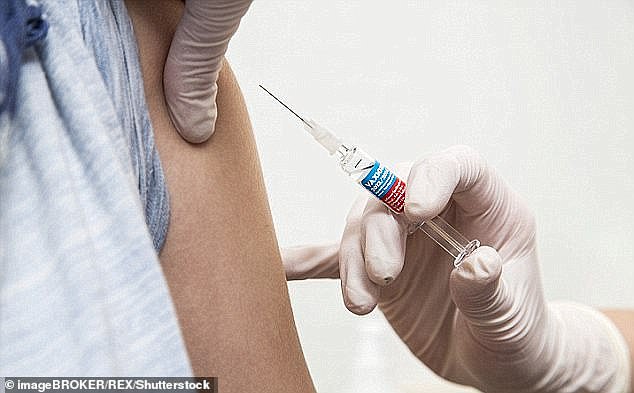 A four-year-old boy from Perris, California, died from a flu-related illnesses and is the first death of the 2019-20 season in Riverside County (file image)

The new flu season has barely begun and it appears it to have already claimed its first pediatric victim.

A four-year-old boy from Perris, California, died from a flu-related illness, according to a release from the County of Riverside Department of Public Health.

Officials say the boy had underlying health issues – the specifics of which are unclear – and tested positive for influenza at a local hospital.

The first overall death of the new season occurred in San Diego County after a 74-year-old man from Chula Vista died on August 15 due to complications from Influenza B.

Jose Arballo Jr, senior public information specialist, told DailyMail.com that the boy’s death was reported to the county on September 6, but it’s unclear when he died.

He added that the child was vaccinated for the 2018-19 season, although it’s unknown if he had received the flu shot for this season.

‘We should never forget that the flu still kills,’ Dr Cameron Kaiser, a public health officer for Riverside County, said in a statement.

‘I always recommend people get their flu shots every year, but a death so early in the flu season suggests this year may be worse than usual. Our hearts go out to the family and loved ones who are grieving.’

The Centers for Disease Control and Prevention (CDC) recommends getting the vaccine either in the form of a shot or a nasal spray. For those who choose to go with the injectable, there are two options.

The first is a trivalent vaccine, which protects against two influenza A strains, H1N1 and H3N2, and one influenza B strain.

The second option, the quadrivalent flu vaccine, protects against the same strains as the trivalent vaccine, as well as an extra influenza B virus.

However, pediatric influenza vaccines will be quadrivalent vaccines, according to the CDC.

Last year, for the first time in two years, the CDC updated its recommendations to include the nasal spray, known as FluMist.

The nasal spray uses live, weakened viruses which are meant to teach the body to recognize and ward off flu strains if you become infected.

The shot works similarly, but uses dead strains of the virus.

According to the CDC, children between six months old and eight years old should get two doses of the flu vaccine – with four weeks in between doses.

It’s particularly important that children receive the shot because they are more likely to suffer from flu complications.

During the 2018-19 season, 130 children died from influenza-associated illnesses, the CDC reports.

The American Academy of Pediatrics published a statement on Wednesday stating that parents should make sure all children get a flu shot by the end of October.