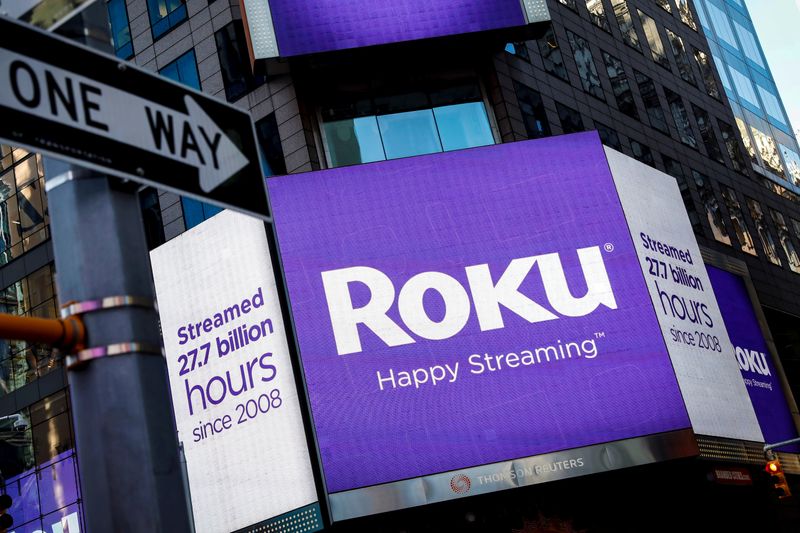 © Reuters. FILE PHOTO A video sign displays the logo for Roku Inc, a Fox-backed video streaming firm, in Times Square after the company’s IPO at the Nasdaq Market in New York

Shares of the company rose 6% after the bell.

Roku expects full-year revenue between $1.58 billion and $1.62 billion, while analysts were expecting $1.58 billion, according to IBES data from Refinitiv.

Streaming device makers have benefited alongside platforms like Netflix Inc (NASDAQ:NFLX) and Amazon.com (NASDAQ:AMZN) Inc’s Prime Video as consumers cut the cord to cable or satellite TV and shift to subscription-based streaming services.

“It attracts more users to the platform, it drives more engagement, and that gives us the foundation to help monetize, in one way or the other,” Louden said.

Roku has shifted its focus from device sales to advertising, which is now the company’s fastest-growing revenue stream, to tap the jump in number of streaming services providers.

Advertising is one of the biggest opportunities for Roku as the viewership moves from traditional TV to streaming, Louden added.

The company charges a commission from media companies that stream programming on the free, ad-supported Roku channel.

Roku added 4.6 million active accounts in the fourth quarter, bringing the total to 36.9 million at the end of the year.

“We see the customer adds as an example of Roku’s ability to exploit increasing interest in OTT for new SVOD’s, such as Apple+ and Disney+”, D.A. Davidson analyst Tom Forte said.

The loss of 13 cents per share matched Wall Street expectations.