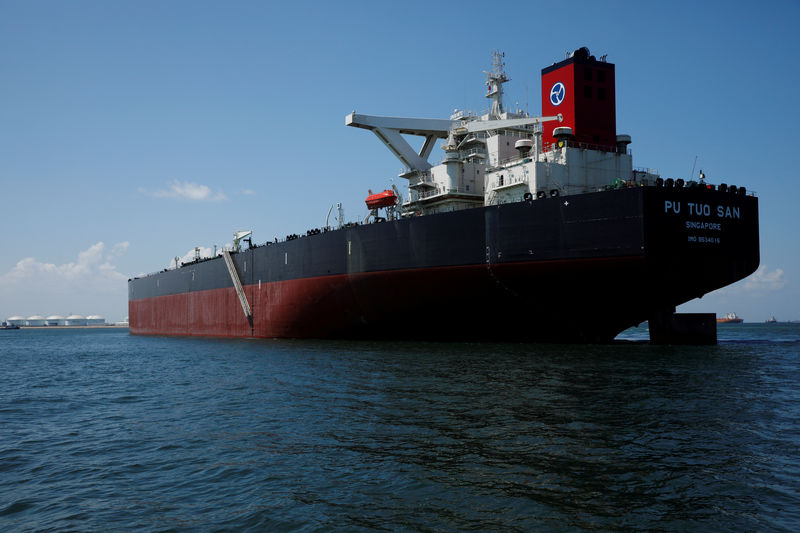 © Reuters. A view of Hin Leong’s Pu Tuo San VLCC supertanker in the waters off Jurong Island in Singapore 2/2

HOUSTON/NEW YORK/LONDON (Reuters) – Rates to charter oil tankers from the Arab Gulf, United Kingdom and the U.S. Gulf Coast to Asia surged to fresh highs on Friday as global oil traders grappled with a tanker shortage in the aftermath of U.S. sanctions on units of Chinese giant COSCO.

Occidental Petroleum Corp (N:OXY) tentatively chartered a supertanker to ship U.S. crude from the U.S. Gulf Coast to Asia for a record $15.8 million this week, three sources said on Friday.

Royal Dutch Shell (L:RDSa) chartered the Suezmax vessel Amoureux this week for $9.2 million to ship crude from Teesport, U.K. to Dalian, China in early November, according to a shipping source and Refinitiv Eikon data.

Freight rates for supertankers from the Louisiana Offshore Oil Port in the U.S. Gulf Coast to Singapore

“Would make you choke on your Cheerios,” one shipbroker said, referring to the rising freight cost.

The United States in late September imposed sanctions on two units of China’s COSCO, which operates more than 50 supertankers, alleging the units violated U.S. sanctions on Iran. Freight rates for supertankers across the globe to ship oil, particularly to Asia, have surged.

Occidental provisionally chartered the Very Large Crude Carrier (VLCC) Hong Kong Spirit for $15.8 million for departure to Asia next month, sources said. That does not mean the voyage will actually be completed.

Bids for chartering VLCCs from the U.S. Gulf Coast to Asia were assessed on Friday as high as $20 million, shipbrokers said, though no charters had been booked at that price, sources said.

“The recent surge in tanker earnings is unprecedented,” ship broker Poten & Partners said in a note on Friday. “As rates reach into the stratosphere, it seems that the market will take a breather sooner or later. Many of the tankers that have recently been fixed or put on subjects don’t know their loading dates yet.”

In the Arab Gulf, Indian Oil Corp Ltd (NS:IOC) was offered rates in a range of $8.2 million to $16 million to ship Iraqi Basra crude to Chennai, India, according to a source with direct knowledge of the matter.

Rates from Basra to Visakhapatnam, India, for VLCCs reached $2.24 per barrel this week, highest in at least a year, Eikon data showed. Indian Oil did not immediately respond to a request for comment.