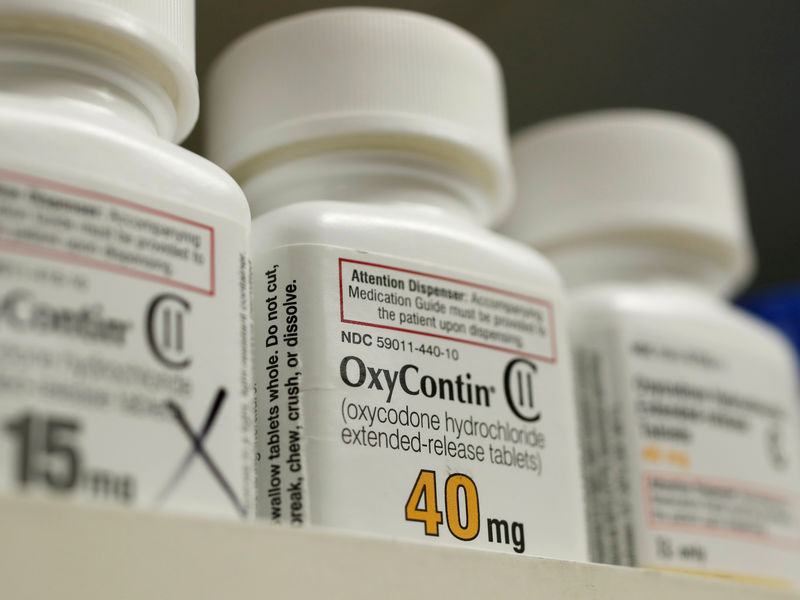 © Reuters. FILE PHOTO: Bottles of prescription painkiller OxyContin, 40mg pills, made by Purdue Pharma L.D. sit on a shelf at a local pharmacy in Provo

(Reuters) – OxyContin maker Purdue Pharma LP will ask a U.S. Bankruptcy Judge on Friday to pause litigation against the company and its owners over the objections of U.S. states that allege the company is trying to protect the controlling Sackler family.

Purdue’s request promises to be one of the most contentious of the company’s Chapter 11 bankruptcy case, which was filed in September to try to implement a settlement proposal it values at more than $10 billion.

Privately-held Purdue said last month it needed to pause more than 2,600 lawsuits so the company can reduce legal costs and try to win over more plaintiffs to its proposed deal.

The lawsuits accuse Purdue and the Sacklers of fueling a public health crisis by aggressively marketing opioids while downplaying their overdose risks, contributing to some 400,000 deaths from 1999 to 2017, according to U.S. statistics.

The company said it has the support of a majority of the local governments that brought the bulk of the lawsuits, although at least 24 states oppose the deal.

The family has not filed for bankruptcy protection, which generally automatically pauses litigation but also imposes obligations to open financial records. The family has pledged to contribute at least $3 billion to the settlement and will relinquish ownership of Purdue to the plaintiffs.

States opposed to the settlement disclosed in a court filing last week that Purdue steered about $12 billion in profits to the Sacklers.

At a Thursday court hearing, a lawyer for Purdue challenged that characterization and said it covered a period dating back to 1995, and was disclosed to plaintiffs a year ago. “The $12 billion figure is in fact not new at all,” said Marshall Huebner, a Davis Polk & Wardwell lawyer who represents Purdue.

Among other things, Purdue will have to convince U.S. Bankruptcy Judge Robert Drain in White Plains, New York, that pausing litigation is in the public interest.

Holdout states said their cases are aimed in part at uncovering the extent of the company’s misconduct.

“This court should not strip the states of their core function to enforce their own regulatory laws in their own courts and administrative bodies,” said a filing last week by the states opposed to the deal.