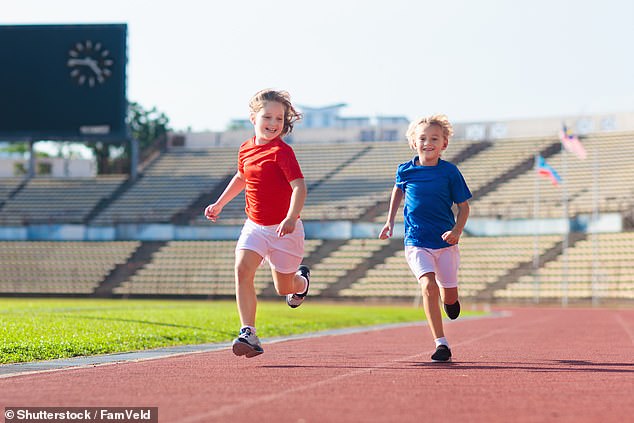 Children do an hour less of exercise each day by the time they finish primary school, a study has suggested.

Youngsters in Year One – aged five and six – exercise for 472.6 minutes a week, on average.

This drops to just 408.9 minutes for children in Year Six – aged 10 and 11, according to the British Heart Foundation-funded research.

Leading experts have now called for more to be done to ensure youngsters keep active as they approach their teenage years.

Exercise levels are known to plummet in adolescence, when teens struggle to find time to go to the gym and stay physically active.

The research, led by experts at the University of Bristol, monitored the behaviour of more than 2,000 children from 57 schools.

All of the youngsters wore an accelerometer for five days, two of which were on the weekend to allow for some comparison.

Professor Russ Jago and team used the data to work out how much moderate to vigorous physical activity the children were doing.

UK guidelines recommend children do at least an hour of such exercise that leaves them out of breath and sweaty each day.

Results showed 61 per cent of children in Year One met the recommended targets, while it was just 41 per cent for those in Year Six.

The drop was particularly steep for girls, who fell from 54 to 28 per cent by the time they moved up to secondary school.

The results were published in the International Journal of Obesity.

Professor Jago said: ‘These numbers prove that more needs be done to ensure children keep active as they approach adolescence.

‘This isn’t about getting children to exercise more, but rather maintaining their activity levels.

Official data showed that 10 per cent of four and five year olds in England were obese in 2017/18. The figure was twice as high among 10-11 year olds.

Figures show the vast majority of young children – around 90 per cent – who are obese or overweight remain in a similar physical state in adolescence.

Obese children are also more likely to become obese adults, which puts them at increased risk of developing heart and circulatory diseases later in life.

Professor Jeremy Pearson, BHF’s associate medical director, said: ‘Almost a third of children in the UK weigh more than they should.

‘Staying active must be combined with policies that help families make healthy and informed choices, such as a 9pm watershed on junk food marketing and restricting the promotion of unhealthy foods.’

To stay healthy, adults aged 19 to 64 should try to be active daily and should do:

A good rule is that 1 minute of vigorous activity provides the same health benefits as 2 minutes of moderate activity.

One way to do your recommended 150 minutes of weekly physical activity is to do 30 minutes on 5 days every week.

All adults should also break up long periods of sitting with light activity.