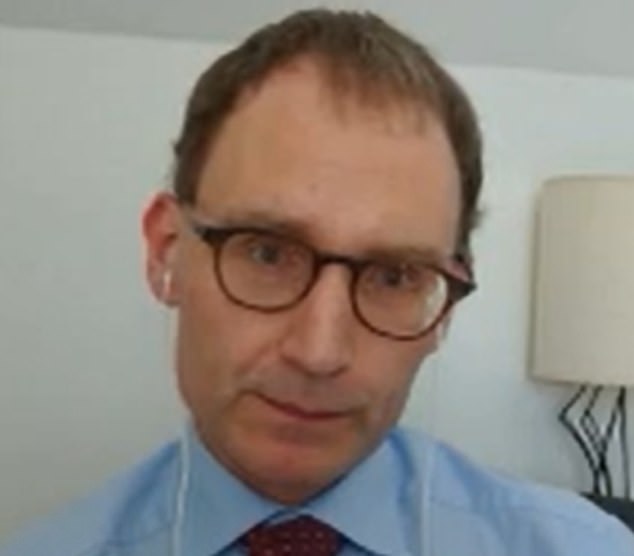 Britain has a death rate of 575 people per million, while Sweden’s is significantly lower at 436 per million 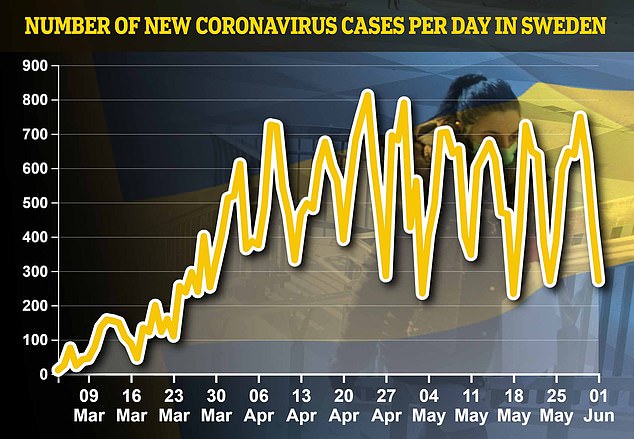 As of Monday, Sweden has recorded 37,814 cases of coronavirus without going into lockdown 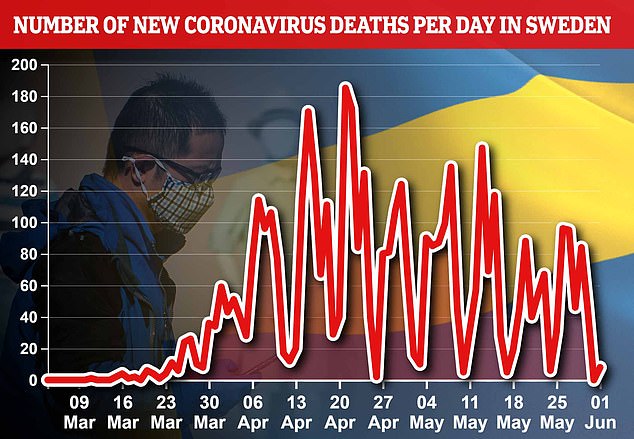 The professor whose grim warning that 500,000 Brits may die from Covid-19 without action triggered lockdown has admitted Sweden may have suppressed its outbreak as well as Britain – without imposing the draconian measures.

Professor Neil Ferguson, of Imperial College London, revealed he had the ‘greatest respect’ for the Scandinavian nation, which has managed to suffer fewer deaths per capita than the UK.

He made the comments at a House of Lords Science and Technology Committee today during his first public appearance since flouting stay at home rules to have secret trysts with his married mistress last month.

The epidemiologist – dubbed Professor Lockdown – has come under fire for his modelling which predicted half a million Britons could die from Covid-19 and heavily influenced the UK’s decision to rush into a nationwide quarantine.

Professor Ferguson appeared to praise Sweden for keeping infections low without the economically crippling curbs and said ‘they have gone quite a long way to [achieving] the same effect’.

But when he was grilled by peers about whether the measures were really necessary in the UK, he pointed out that Sweden’s infection rate had not fallen as rapidly as the Britain’s.

The UK has a death rate of 575 people per million, while Sweden’s is significantly lower at 436 per million. As well as fewer deaths, Sweden’s GDP actually grew in the first quarter of 2020, suggesting it might avoid the worst of the economic fallout from the crisis.

Also in his return to the public spotlight, Professor Ferguson:

The group of scientists were accused of using an outdated mathematical model in their March report, which predicted half a million deaths in the UK in the worst-case scenario.

Professor Ferguson told the committee: ‘There are differences in how science has influenced policies in different countries.

‘I have the greatest respect for scientists there [in Sweden]. They came to a different policy conclusion but based really on quite similar science.

‘They make the argument that countries will find it very hard to really stop second waves… I don’t agree with it but scientifically they are not that far from scientists in any country in the world.’

Professor Ferguson was quizzed about why Sweden had recorded such few deaths without imposing lockdown, and faced questions about whether the economically-crippling measures were necessary in the UK.

Some experts have claimed that social distancing and strict hand-washing protocols would have been suffice to flatten the epidemic’s curve.

Professor Ferguson admitted he was stumped as to why Sweden had recorded just 4,000 Covid deaths when some calculations estimated the country would suffer 90,000 without the measures.

He added: ‘I think it’s an interesting question. It’s clear there have been significant social distancing in Sweden.

‘Our best estimate is that that has led to a reduction in the reproduction number to around 1.

‘It’s clear that when you look at their mortality, they are not seeing the rate of decline most European countries are seeing.

Professor Ferguson also told the House of Lords Science and Technology Committee that transmission from Spain and Italy in late February and early March contributed to the UK becoming the worst-hit country in Europe.

He said: ‘One thing the genetic data is showing us now is most chains of transmission still existing in the UK originated in Spain, to some extent Italy.

‘So we had been worrying about importation of infection from China, we’re a very well-connected country in the world, other Asian countries, the US.

‘But it’s clear that before we were even in a position to measure it, before surveillance systems were set up, there were many hundreds, if not thousands, of infected individuals who came into the country in late February and early March from that area.

‘And that meant the epidemic was further ahead than we anticipated which explains some of the acceleration of policy then, but it also explains why, to some extent, why mortality figures ended up being higher than we had hoped.’

‘But nevertheless it is interesting that adopting a policy which is short of a full lockdown… they’ve gone quite a long way to [achieving] the same effect.

‘Although there is no evidence of a rapid decline in the same way in other European countries. That is something we’re looking at very closely.

‘Lockdown is a very crude policy and what we’d like to do is have a much more targeted approach that does not have the same economic impacts.’

Professor Ferguson also told the committee he was ‘shocked’ at how badly care home populations were protected globally.

‘I, like many people, am shocked about how badly European – or countries around the world – have protected care home populations,’ he said.

Asked about what could be done in future, he said: ‘If we had done a better job, or did do a better job, of reducing transmission in closed institutions like hospitals and care homes, we would have a little bit more room, wiggle room as it were.

‘The infections in care homes and hospitals spilled back into the community, more commonly from the people who work in those institutions.

In a frank admission to the House of Lords Science and Technology Committee, Professor Matt Keeling, of the University of Warwick, also suggested that modellers had ‘dropped the ball’ with regards to how Covid-19 would spread through care homes.

The scientists were asked by Peers what may have been done differently during the course of the epidemic, looking back.

Professor Ferguson said genetic data now showed that most transmissions in the UK originated in Spain and, in some cases, in Italy.

‘We had been worrying about import of infections from China… other Asian countries, maybe the US,’ he said.

‘But it’s clear that before we were even in a position to measure it, before surveillance systems were set up, there were many hundreds if not thousands of infected individuals came into the country in late February and early March from that area (Spain and Italy).

A long-awaited report modelling the impact of easing lockdown is being pushed back ‘several weeks’ after Imperial College London scientists behind the paper complained their work had been ‘politicised’.

The group has been embroiled in a series of public controversies in recent weeks, which has prompted prominent politicians to raise doubts about their competency.

The Imperial team was thrust into the spotlight when Professor Ferguson, flouted lockdown rules.

Then the group of scientists were accused of using an outdated mathematical model in a March report which predicted half a million deaths could occur in the UK if a nationwide quarantine was not immediately imposed.

A senior member of the team said the latest report had been handed to Government but was being withheld from the public for fear of backlash.

They told the Financial Times the new report would not be made public for another few weeks after it was peer-reviewed by other scientists and published in a journal.

Their report in March was released as a ‘pre-print’, meaning it was made public before it had been reviewed by other experts.

They said: ‘Examining exit strategies from lockdown remains a top priority of the team, and we currently are supporting multiple governments in their planning for this.’

‘Given the increasingly politicised nature of debate around the science of Covid-19, we have decided to prioritise submitting this research for publication in a peer-reviewed scientific journal and will release it publicly at that time.’

Commenting on the news, eminent statistician Sir David Spiegelhalter said ‘major analyses should be made public as soon as possible’.

But he admitted that there is a fine line between public transparency of the Government’s decision-making and making sure scientists were not subjected to personal attacks.

‘That meant that the epidemic was further ahead than we anticipated. It explains some of the acceleration in policy then, but it also explains to some extent why mortality figures ended up being higher than we had hoped.’

He said the UK was ‘much more heavily affected’ than modellers anticipated, adding: ‘That’s one of the reasons we have, if not the largest, one of the largest epidemics in Europe.’

He continued: ‘Going forward, what the models say is that we have limited room for manoeuvre, that this is a highly transmissible pathogen.

‘We’ve reduced transmission by about 80 per cent, but to maintain control we need to keep that transmission suppressed by about 65 per cent or so.

‘So we have a little bit of wiggle room, so it will be a learning experience as to how we allow society to resume while maintaining control of transmission.’

Professor Keeling told the committee ministers were given information leading up to lockdown about what would happen if the epidemic was just allowed to run.

‘In the early stages, in the absence of a lockdown, the very alarmist values that were coming out were really about a worst-case scenario,’ he said.

‘So if we just let the epidemic run, how bad could it be? And that’s the sort of information policy-makers needed at that time.

‘If the lockdown had been very strict, if we’d have thought more about what was happening in care homes and hospitals, as you’ve heard, early on maybe that was one of the areas where modellers did drop the ball.

‘With hindsight, it’s very easy to say we know care homes and hospitals are these huge collections of very vulnerable individuals, so maybe with hindsight we could have modelled those early on and thought about the impacts there.’

But he added: ‘Considering the amount of information we had at the time, I think the models offer our best estimates of what could happen in the short-term.

‘Long-term predictions are much, much more difficult.’ Professor Keeling said that Italy was the ‘big eye-opener’ when modelling on coronavirus.

‘I think it was unclear in the early stages of the Wuhan outbreak whether we were going to get a similar sort of scale in the UK or elsewhere in the world,’ he said.

‘So really I think Italy was the big eye-opener, that we realised that we could have a large potential outbreak in the UK.’

Dr Adam Kucharski, of the London School of Hygiene and Tropical Medicine, told the committee that ‘speed is really of the essence’ with regards to the test and trace strategy.

‘The nature of the evidence we have on transmission is that by the time someone shows symptoms, they have probably been infectious for a day or two already,’ he said.

‘So that means by the time someone has symptoms, reports as a case, their contacts have potentially already been infected, and those people may themselves become infectious three or four further down, so really very soon after.

‘So I think that what that shows is that for these test and trace, these targeted measures to work, speed is really of the essence.

‘Because as soon as somebody becomes symptomatic, you have a very short time window before their contacts may become infectious, and then you’ve got another generation of transmission to deal with.’

Professor Ferguson said he expects transmission and numbers of cases to remain ‘relatively flat’ between now and September – but after that it remains ‘very unclear’.

‘I suspect though, under any scenario that levels of transmission and numbers of cases will remain relatively flat between now and September, short of very big policy changes or behaviour changes in the community.

‘The real uncertainty then is if there are larger policy changes in September, of course we move into time of year when respiratory viruses tend to transmit slightly better, what will happen then. And that remains very unclear.’