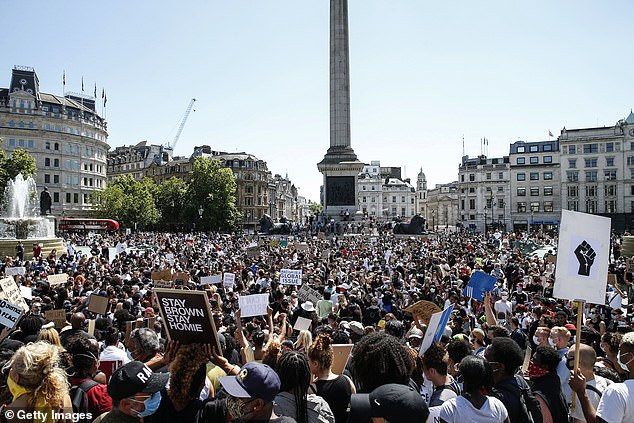 TRAFALGAR SQUARE, LONDON: Hundreds of demonstrators packed into Trafalgar Square on Sunday, chanting ‘I can’t breathe,’ the words Floyd was heard gasping as a white police officer knelt on his neck in Minneapolis. Government rules still prohibit people from deliberately gathering in groups larger than six people, and stipulate people must stay 2m away from others at all times 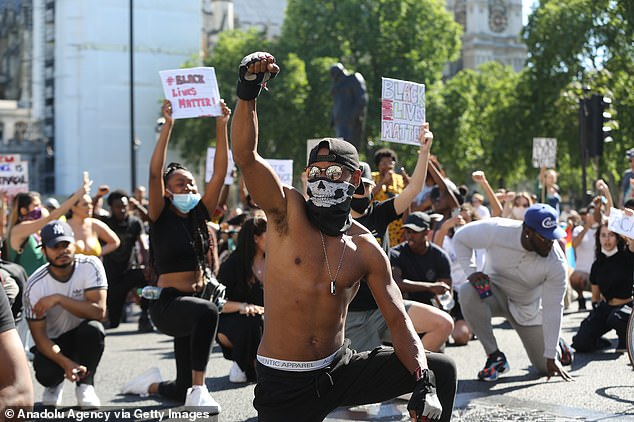 LONDON, ENGLAND: People carrying banners gather during a protest over the death of George Floyd, an unarmed black man who died after being pinned down by a white police officer in USA 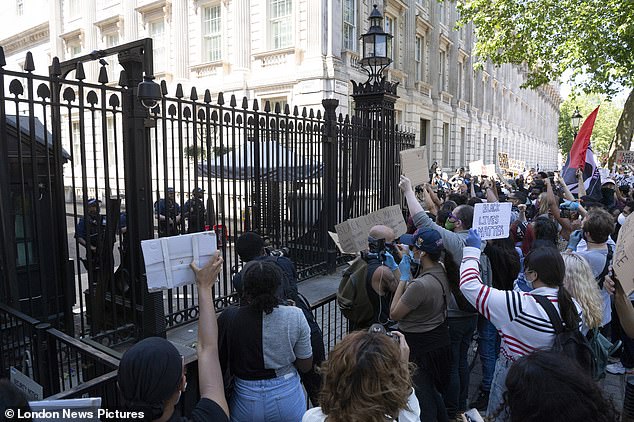 Protestors involved in the backlash against the death of American man George Floyd risk catching coronavirus while demonstrating in the street, officials fear.

As the US yesterday went through another day of violent rioting and protests broke out in London, Manchester and Cardiff, there are concerns the mass gatherings could trigger new waves of Covid-19.

Many places where protests have emerged are still under Covid-19 lockdown rules banning large crowds but police have been unable to contain them.

The coronavirus spreads fastest when people are in close contact with one another and politicians have urged those taking part to try and keep social distancing, to wash their hands and to get tested for the virus afterwards.

Many protestors have been photographed ignoring social distancing rules and not wearing any protective gear such as masks or goggles – but a scientist has warned that shouting is likely to increase the risk of virus transmission even more.

Demonstrations are also attracting large numbers of black and ethnic minority people, who are dying of Covid-19 in greater numbers than white people.

Officials in the US warned people to protect themselves and others and said they fear a surge in cases and deaths in a couple of weeks’ time.

The protests, now happening all over the world, were triggered after a white policeman in Minnesota killed George Floyd by kneeling on his neck for more than eight minutes during an arrest after Mr Floyd allegedly used counterfeit money. The 46-year-old was heard gasping ‘I can’t breathe’ before his death.

Social distancing is arguably the world’s greatest weapon against the coronavirus because of the way it spreads.

The virus spreads primarily through respiratory droplets – that means it piggy-backs on drops of moisture that are carried on someone’s breath.

They break free into the air when someone infected with Covid-19 exhales, coughs, sneezes, spits or wipes their nose.

The closer an uninfected person is to the source of these droplets, the more likely they are to get infected. In a crowd, a single infected person can infect many others just because them come into close contact with them so rapidly.

Protests may carry extra risk because shouting can carry more droplets out of someone’s mouth.

Dr Saskia Popescu, an infectious disease expert at George Mason University in Fairfax, Virginia, told the Washington Post: ‘Shouting and screaming, as some studies have shown with singing, can project droplets farther, which makes the use of masks [and eye protection] that much more important.’

Scientists are divided over how well banning mass gatherings prevents the spread of the virus.

In a paper presented to SAGE, the British Government’s scientific advisory committee, experts said that mass gatherings may be a smaller risk than pubs and restaurants because people attend them infrequently and generally don’t directly interact with many people.

Statistics last week showed that around 8,000 people per day are still catching the coronavirus in Britain – some 54,000 people each week.

Scientists have voiced concerns about the Government’s plans to start easing lockdown this week, including allowing groups of up to six people to meet.

They say the virus is still circulating at dangerous levels in the community and too much social freedom could trigger another outbreak.

Huge crowds like those which formed in London, Manchester and Cardiff over the weekend could be a fertile breeding ground for the coronavirus if people attending are carrying the bug.

‘Police are encouraging our communities to comply with the regulations to keep everyone as safe as possible.’

Protesting might have a particularly strong effect on raising the risk of virus spreading between people there, if they are infected, one scientist said.

Dr Saskia Popescu, an infectious disease expert at George Mason University in Fairfax, Virginia, told the Washington Post: ‘Crowded protests, like any large gathering of people in a close space, can help facilitate the spread of Covid-19, which is why it’s so important participants wear masks, eye protection and bring hand-gel.

‘Shouting and screaming, as some studies have shown with singing, can project droplets farther, which makes the use of masks [and eye protection] that much more important.’

Public figures in the US, where protesting is much more widespread and more than 100,000 people have died of Covid-19 this year, have directly warned protestors.

The mayor of Washington DC, where fires have been lit outside of the White House, said people ignoring social distancing risk ‘compounding’ the impact of the virus.

Mayor Muriel Bowser said: ‘I’m concerned that we had mass gatherings on our streets when we just lifted a stay at home order and what that could mean for spikes in coronavirus cases later.

‘In fact, I’m so concerned about it that I’m urging everybody to consider their exposure — if they need to isolate from their family members when they go home and if they need to be tested — because we have worked very hard to blunt the curve.’

She added: ‘And while I saw some people with masks last night, others didn’t,’ NBC reports.

‘I saw some people social distancing, other people were right on top of each other.

‘So we don’t want to compound this deadly virus and the impact it’s had on our community.’

Governor of Maryland, Larry Hogan, said: ‘There’s no question that, when you put hundreds or thousands of people together in close proximity, when we have got this virus all over the streets, is — it’s not healthy.

He added: ‘Two weeks from now across America, we’re going to find out whether or not this gives us a spike and drives the numbers back up again or not.’

In NHS hospitals in England, black people have so far made up a disproportionate of COVID-19 victims.

Scientists do not understand why, whether there are biological reasons such as higher rates of diabetes, or whether more BAME people have caught the virus because they are more likely to live and work in densely populated cities.

White people account for 76% of all coronavirus deaths in NHS England hospitals, while they make up 86% of the population.

People of Asian ethnicity – which includes south Asian countries such as India, Bangladesh and Pakistan – make up 7% of the COVID-19 deaths and 7.5% of the population.

Black people have accounted for 5% of all coronavirus deaths but just 3.3% of the general population.

Mixed race people, meanwhile, account for 1% of deaths and 2.2% of the population.

Data shows that black people and those of Asian ethnicity are dying of Covid-19 at a faster rate than white people.

NHS England data shows that 14 per cent of all people who have died with the coronavirus in its hospitals have been black or Asian.

But they only make up around 11 per cent of the population of the country, showing they are dying at a disproportionate rate.

And data from the US shows that African-American people are dying are more than double the rate of white people.

The APM Research Lab published findings in May showing that, nationwide, black Americans were dying of the coronavirus at a rate of 50.3 per 100,000 people, The Guardian reported.

More than 20,000 black Americans had died by the time the statistics were released and some individual states had even greater differences between ethnicities.

In Kansas black people were dying at seven times the rate of whites, while the ratio was six-to-one in Washington and five-to-one in Michigan and Missouri.

This is of concern because the George Floyd protests – linked to the Black Lives Matter movement – are attracting large numbers of people from ethnic minorities.

The protests hinge on the treatment of black crime suspects by white police officers in the US.

Minneapolis police officer Derek Chauvin has been charged with the murder of George Floyd after kneeling on his neck and ignoring the man’s desperate pleas for help as he said he couldn’t breathe.

Mr Floyd had been arrested for allegedly using counterfeit money and then refusing to hand back the cigarettes he’d bought when asked by the shopkeeper, the BBC reported.

The mayor of Atlanta, Georgia, where more than half of the population is black, said: ‘If you were out protesting last night, you probably need to go get a COVID test this week.

‘There is still a pandemic in America that’s killing black and brown people at higher numbers.’