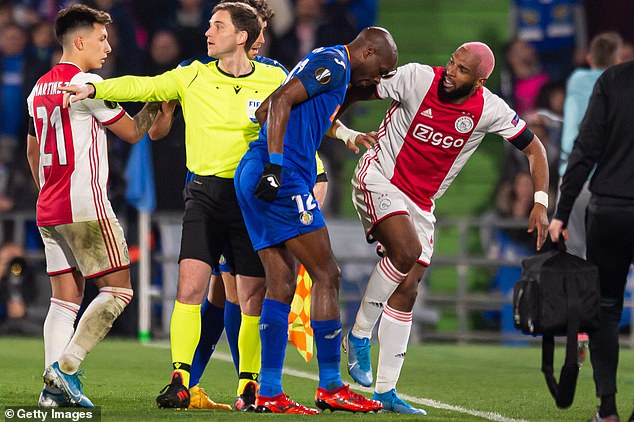 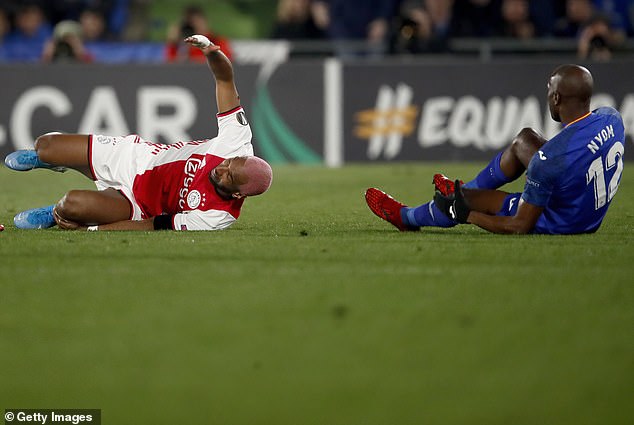 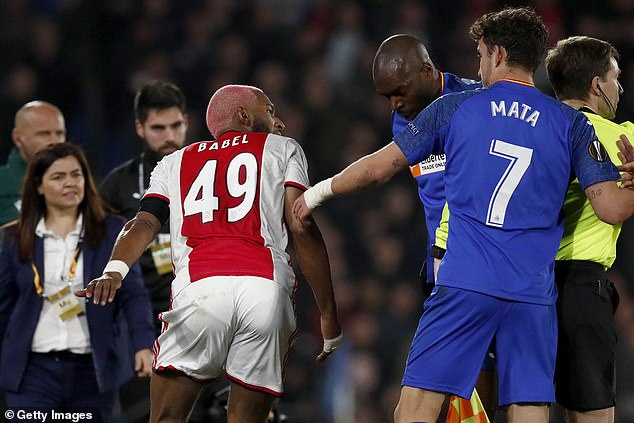 Ryan Babel was left furious by Getafe’s Allan Nyom when the defender threw himself to the floor after a challenge from the Ajax attacker.

Babel was so incensed by the reaction of the former West Brom defender that he decided to copy his action, falling to the floor and rolling around before mocking his opponent with a fake cry.

The Dutch side were 1-0 down at the time and the winger clearly thought Nyom was play-acting.

The ex-Liverpool man was booked for the challenge but expressed his frustration after the game.

‘I don’t know if I’ll ever do the same again. It happens in the heat of the moment,’ he told BT Sport after the game.

‘That guy [Nyom] was being very annoying. Getafe hasn’t impressed me.

‘Next week, at home, we’ll play better and with a different referee.’

Brazilian Deyverson gave Getafe the lead in the first half before being hit by a lighter during his celebration.

Ajax will have to overcome the two-goal deficit when they host the second leg next Thursday.

They found themselves in the Europa League after narrowly missing out on qualification from their Champions League group, having made the semi-finals of the competition last season.

Instead it was Chelsea and Valencia who progressed to the last-16 with the Blues facing Bayern Munich next week after the Spaniards suffered a 4-1 defeat to Atalanta last night.

AHEAD OF THE GAME: Sky and BT want to show MORE Premier League games next term instead of demanding huge rebate due to shutdown,...

'Praying for you champ': Boxing world rallies around Anthony Yarde after British fighter's grandmother died from coronavirus… just days after his father passed away...

Evidence of King Henry II's attempts to win back favour with...