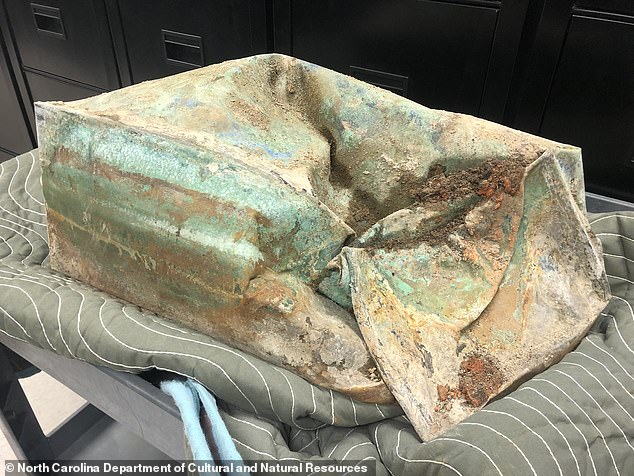 Workers discovered a time capsule dating back to 1894 while dismantling what was left of a 75-foot Confederate monument in Raleigh, North Carolina 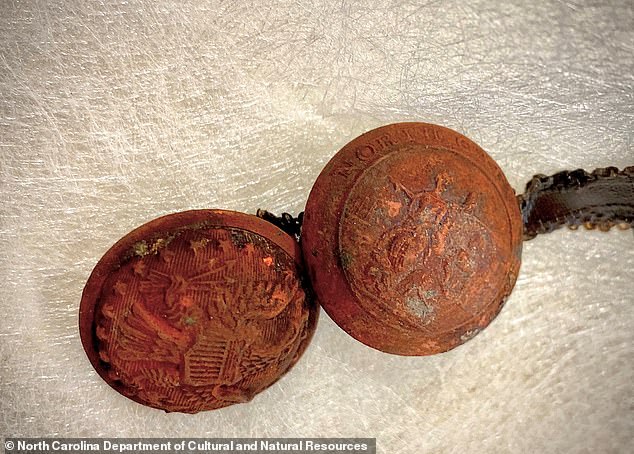 Experts opened the time capsule to discover a pair of buttons that once belonged to Confederate General Robert E. Lee 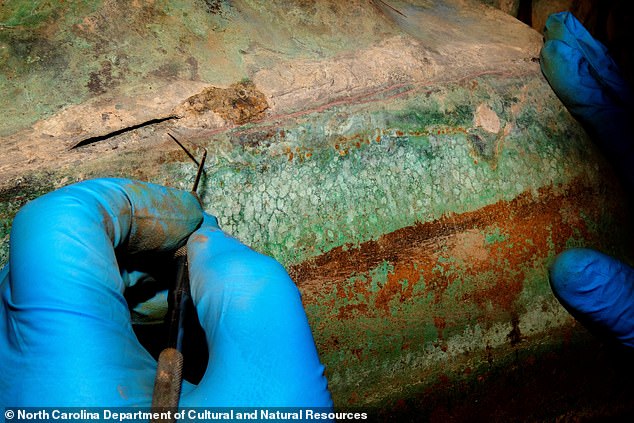 There was also a horse hair in the box, which is said to have came from Lee’s horse. Traveler 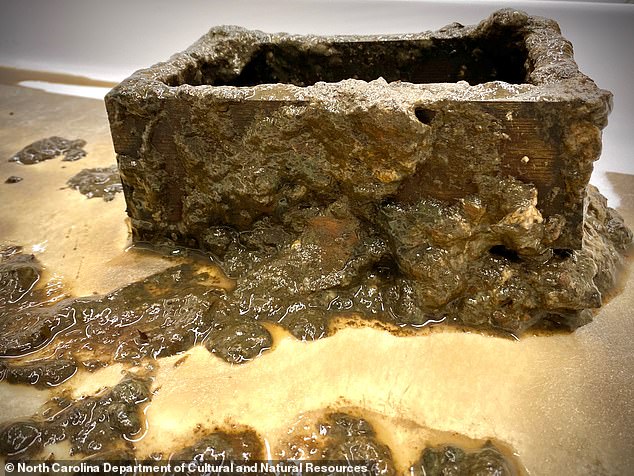 Most of the items pulled from the ‘corner stone box’ were damaged by the elements, but experts are still working to recover the artifacts 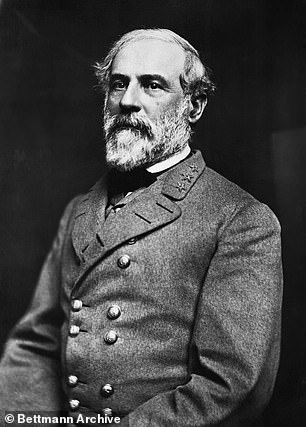 Robert E. Lee (pictured) was a Confederate general who commanded the Army of Northern Virginia 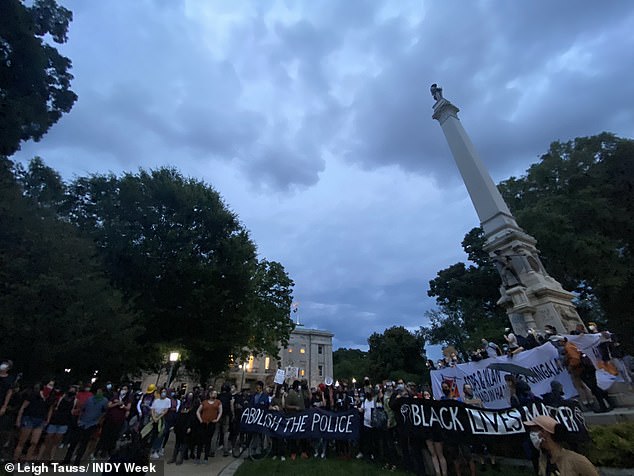 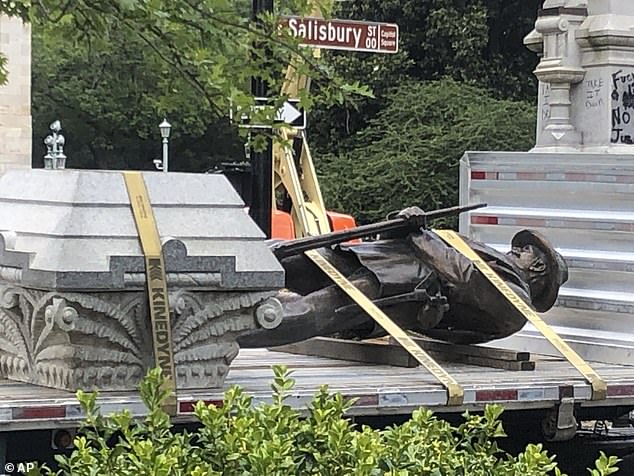 On Juneteenth, protesters used a strap to pull down two statues of Confederate soldiers that were part of a larger obelisk in downtown Raleigh 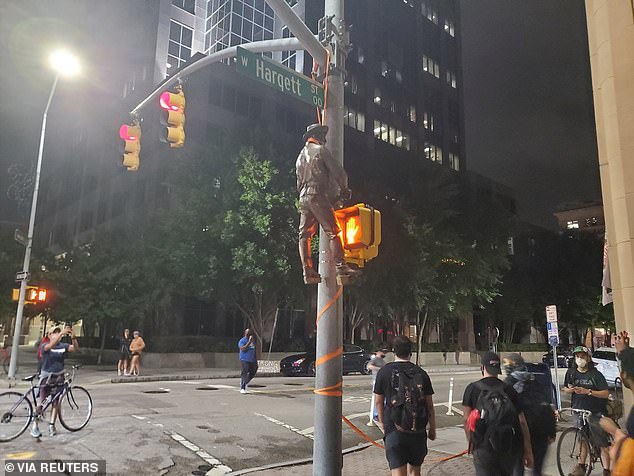 Protesters hung one of the statues around a light pole during the Black Lives Matter marches. Numerous Confederate statues have been vandalized or torn down across the South following the death of George Floyd

Workers dismantling a Confederate monument in North Caroling stumbled upon a time capsule at the base that contains items belonging to General Robert E. Lee.

The massive statue was destroyed during Black Lives Matter protests in late June and officials ordered the removal of the remains due to its ‘painful memory.’

The event has led experts to a rusty metal box, which they opened to find a set of Lee’s dress coat buttons, along with strand of hair from his horse Traveler that have been hidden since 1894.

Archaeologists also found a number of other Confederate items including songbooks, money and flags, but many of the artifacts have been damaged by the elements.

Most of the items pulled from the ‘corner stone box’ were damaged by the elements, but NC Department of Natural and Cultural Resources (DNCR) uncovered a news clipping from May 25, 1894 that shows a list of times placed in the capsule.

The article highlights a rock taken from Gettysburg, a rose bud worn by Lee, money, song books and sketches of generals from the Civil War, according to CNN.

‘Archaeologists and conservators from the NC Department of Natural and Cultural Resources opened a time capsule buried in 1894 beneath the cornerstone of the Confederate Soldiers Monument on Union Square in Raleigh,’ reads DNCR website.

‘Because the metal box containing the items had rusted through in places, the items contained in the time capsule were severely damaged by the elements.’

‘Items recovered so far include a wooden box, a stone thought to be from Gettysburg, two buttons attached to a piece of textile and a strand of what appears to be horse hair. Preservation work on these items and the metal box itself has begun.’

The team used a hammer and stake to open the capsule without damaging the structure.

Many of the items pulled from the back were covered in a thick layer of mud, but the most exciting find was a set of buttons that belonged to Lee.

Also in the capsule was a strand of horse hair, a Confederate songbook, money and flags.

Other items include a Bible found at at Appomattox Court House the day after Lee surrendered to Union General Ulysses S. Grant, putting an end to the Civil War.

Lee was a Confederate general who commanded the Army of Northern Virginia.

Due to his success as a leader, Lee was promoted to commander of the Southern armies during the Civil War.

However, his surrender at Appomattox Court House on April 9, 1865 is viewed as the end of the war and victory for the Union army.

The monument, which represented a group of Confederate soldiers, sat on North Carolina’s capital grounds.

At the top of the massive column was a statue depicting a Confederate artillery soldier holding a gun.

Near the bottom sat two statues, one representing the Confederate infantry and the other a Confederate cavalryman.

There were also two 32-pound naval cannons stand on each side of the monument.

On Juneteenth, protesters used a strap to pull down two statues of Confederate soldiers that were part of a larger obelisk in downtown Raleigh.

Numerous Confederate statues have been vandalized or torn down across the South following the death of George Floyd, a Black man who was killed after a white Minneapolis police officer pressed a knee into his neck for several minutes.

Governor Roy Cooper ordered the removal of the monument June 20 citing safety reasons after protesters topped it over, along with other statues on the capitol grounds.

In a statement released by his office and published to Twitter, Cooper said, ‘Monuments to white supremacy don’t belong in places of allegiance, and it’s past time that these painful memorials be moved in a legal, safe way.’

Juneteenth, an annual U.S. holiday on June 19, has taken on greater significance this year following nationwide protests over police brutality and the deaths of George Floyd, Breonna Taylor, Rayshard Brooks and other African Americans.

WHAT IS JUNETEENTH? Juneteenth, a portmanteau of June and 19th, also is known as Emancipation Day. It commemorates the day in 1865, after the Confederate states surrendered to end the Civil War, when a Union general arrived in Texas to inform the last group of enslaved African Americans of their freedom under President Abraham Lincoln’s 1863 Emancipation Proclamation. In 1980, Texas officially declared it a holiday. It is now recognized in 46 other states and the District of Columbia. Although in part a celebration, the day is also observed solemnly to honor those who suffered during slavery in the United States with the arrival of the first enslaved Africans over 400 years ago.

WHAT IS SIGNIFICANT THIS YEAR? This year Juneteenth coincides with global protests against racial injustice sparked by the May 25 death of Floyd, a black man, in Minneapolis police custody. It also accompanies the coronavirus outbreak, which has disproportionately affected communities of color. Last week, U.S. President Donald Trump, who had already been under fire for his response to both crises, drew further criticism for scheduling a Friday re-election rally in Tulsa, Oklahoma. He has since moved it to Saturday. Tulsa is an important and especially sensitive site where a white mob massacred African-American residents in 1921. Community organizations nationwide will devote the day to discussions on policing and civil rights ahead of the November election.

HOW ARE PEOPLE MARKING THE DAY? People will mark the 155th anniversary across the country with festive meals and gatherings. While many cities have canceled this year’s annual parades because of the pandemic, other groups have opted for virtual conferences or smaller events. In Washington, groups plan marches, protests and rallies. Amid the wave of racial justice protests, some U.S. businesses have committed to a change of policies, including recognition of the holiday. Among the companies that have announced they will recognize Juneteenth as a paid company holiday are the National Football League, THe New York Times, Twitter and Square.